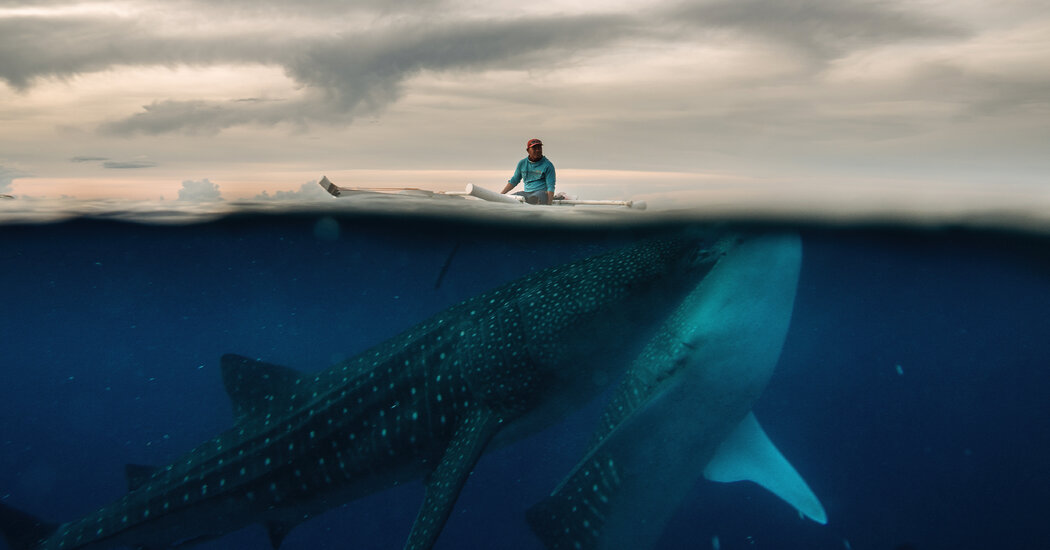 As the world reopened cautiously in 2021, our correspondents seized the chance to venture out in search of stories that would astonish, delight, provoke and enlighten. We went from the heights of a Himalayan ski slope to the ocean depths off the Philippines where amiable giants dive, and from a rugged island where a whistling language is still used to an Italian atelier where robots carve the sculptures.

If the pandemic often kept our reporters confined to urban settings in 2020, this year afforded them the chance to explore deep into the countryside. We observed a (bogus) diamond rush in rural South Africa and accompanied Indigenous hunters in Taiwan. We trekked to Canada’s beaver dams, swam in a contested stream in northern Israel and returned home to a Tuscan village sliding back in time.

Many dispatches arrived from places difficult to access even in the best of times, from ancient ruins in Syria now housing the desperate and displaced to an island off New Guinea full of war relics and human remains. We also made it to Babylon, Suriname, Kaliningrad, Saudi Arabia, Albania and “Trump Lake” in Kosovo.

Cities demanded attention, too: We put Cairo’s glorious and glitchy elevators (and its Tahrir Square) in the spotlight, along with the giant murals transforming São Paulo into an open-air art gallery. Our stories stretched from an empty Louvre to Rio’s dive bars to Hong Kong’s newly crowded nature spots. Kolkata merited two dispatches: on its fairy tale trams and its cafes, where it’s all about the conversation.

As India in April suffered the world’s worst coronavirus crisis, our correspondent described the fear of living amid a disease spreading at such scale and speed: “Crematories are so full of bodies, it’s as if a war just happened. Fires burn around the clock. Many places are holding mass cremations, dozens at a time, and at night, in certain areas of New Delhi, the sky glows.”

For many Afghans, unassuming white high-top sneakers with green-and-yellow trim evoke only one emotion: fear. That’s because they’re beloved by Taliban fighters as a status symbol, and the shoes have become synonymous with violence.

— By Thomas Gibbons-Neff and Fahim Abed; photographs by Jim Huylebroek

An ecologically minded experiment to make Paris a cycling capital has led to a million people now pedaling daily — and to rising tensions with pedestrians. “It’s chaos!” exclaimed Sarah Famery, a 20-year resident of the Marais neighborhood, shaking a fist at a swarm of bikes. “It’s becoming risky just to cross the street!”

On the weekend that Venice’s ban on cruise ships took effect, some tourists were surprised to be docked hours away from the city’s famous sights. “It’s not exactly as charming as Venice,” said the honeymooning Vittoria Comparone, as she looked out from her ships’ cabin — not over St. Mark’s Square, but at towering cranes.

The cows don’t have to produce milk. The pigs sleep late. Their only purpose is to live peacefully — and provoke questions about how we eat. “We need to think about how we can live differently, and we need to leave animals in peace,” said Karin Mück who helps run an ex-dairy farm in Germany turned into an animal retirement home.

A Times correspondent who grew up in the Afghan capital returned just before the Taliban’s victory, taking in the end of one era and the fearful start of another: “In the hours before the Taliban walked into Kabul, and the two-decade quest to build a democratic Afghanistan tumbled into fear and uncertainty, I left my parents’ home to take a bus around the city. This was not a reporting outing. It was personal.”

— By Mujib Mashal; photographs by Mr. Mashal and Jim Huylebroek

The earthquake and tsunami of March 11, 2011, wiped away the ancient Japanese village of Kesen. In the past decade, a small group of survivors has valiantly tried to rebuild the community, but a grim reality has set in: This emptiness will likely last forever.

With borders closed because of the pandemic, crowds of Russian tourists have traded tropical beaches for Lake Baikal’s icicle-draped shores. What’s the appeal, especially when the temperature is subzero? “The assault on the senses is otherworldly,” writes our correspondent. “The silence around you is interrupted every few seconds by the cracking underneath — groans, bangs and weird, techno-music twangs. Look down, and the imperfections of the glass-clear ice emerge as pale, shimmering curtains.”

Groups of boars have become an unavoidable presence in Haifa, Israel, charming some while scaring others. “It became like an everyday thing,” said a chef who lets his dog play with the boars that putter around city parks. Bumping into one is “like seeing a squirrel.”

Belief in the benefits of the cure, a type of folk medicine that interweaves home remedies with superstition, religion and a sprinkle of magic is still a way of life in pockets of Ireland. “That we don’t believe in miracles doesn’t mean we don’t hope for them,” a professor of Irish folklore said.

A cave complex at a temple in Thailand has long drawn tourists, pilgrims and guano collectors. Now, scientists have arrived, looking for links to the coronavirus. “I’m worried that one day bats will only be a legend here,” said a monk at a nearby temple. “If we lose our bats, we lose what makes us special.”

An artist and an innkeeper have enlisted the help of a burro in their effort to rescue the traditions of Spain’s ancient pilgrimage route from mass tourism (and selfies). “Losing these traditions, it’s like what if we lost the pyramids?” said one of the pilgrims. “We put a lot of value on monuments, but less on the small things.”

Milk is a favorite drink in Rwanda, and milk bars serve it up in abundance, fresh or fermented, hot or cold. “When you drink milk, you always have your head straight and your ideas right,” a patron said.

One county’s plan to help older, carless citizens stuck in remote villages proved wildly popular and has been copied across South Korea, revolutionizing public transportation in the countryside. “I probably know more about these old folks than anyone else because I drive them two or three times a week,” said one of the a 100-won (9 cent) taxi drivers.