In Hard Times, Afghan Farmers Are Turning to Opium for Security 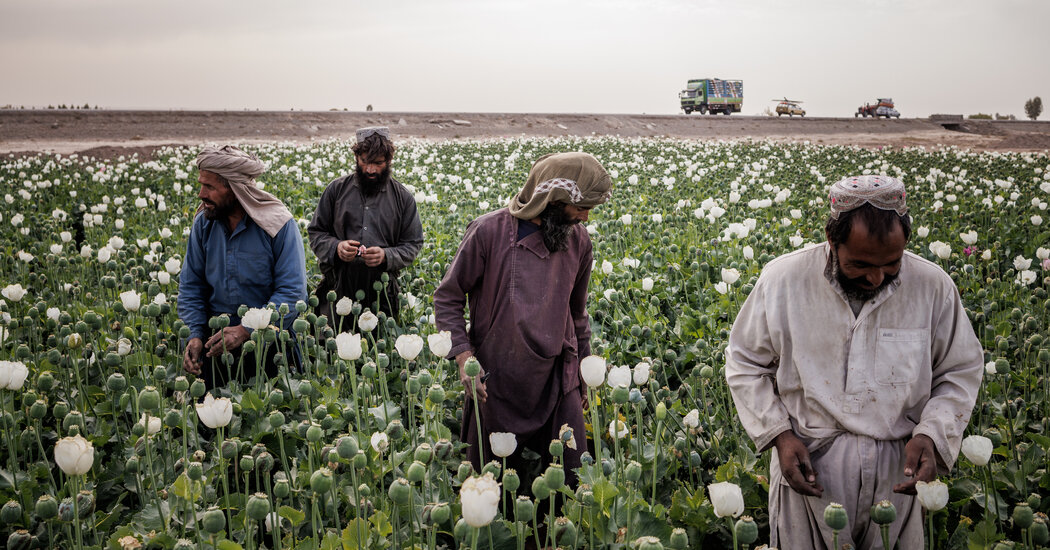 ARGHANDAB, Afghanistan — Abdul Hamid’s pomegranate trees were scarred from bullets and shrapnel. The river was low and the land dry. There was no profit anymore from the fruit that made his district in southern Afghanistan so renowned for something other than war.

So this month, Mr. Hamid’s field hands began destroying his 800 or so pomegranate trees in Kandahar’s Arghandab district. He looked on as the century-old orchard, farmed for generations by his family, was turned into a graveyard of twisted trunks, discarded fruit and churned earth.

“There’s no water, no good crops,” Mr. Hamid, 80, said, the steady burp of a chain saw drowning out his bleak assessment. The lack of rain and diminishing well water had made it nearly impossible to irrigate the trees year-round, leaving portions of this year’s harvest burned from dehydration. The Taliban’s military campaign over the last year didn’t help.

The decision to destroy his entire orchard is one Mr. Hamid and many other Afghans farmers in the district are making to earn an income after a series of devastating harvest seasons. A crippling drought, financial hardships and unpredictable border closures at the war’s end have sent them scrambling for the security of the region’s most reliable economic engine: growing opium poppy.

One orchard-turned-poppy field means little on the broader scale of Afghanistan’s opium output, the largest in the world, accounting for more than 80 percent of the world’s supply, according to the United Nations Office on Drugs and Crime.

But what is happening in Arghandab and elsewhere in Afghanistan, in the middle of a dire economic collapse that has led to a nationwide cash crunch, may have ramifications for the drug’s production and trafficking across Afghanistan. Many fear that this season is an early warning of much higher cultivation in the future.

“Next year you will see poppy crops,” said Mohammed Omar, 54, another pomegranate farmer, as he strutted through his orchard, hands clasped behind his back. His field hands pulled the season’s last remaining fruit from the spiny branches above. “There’s nothing else.”

In Arghandab, a district northwest of Kandahar city and bisected by a meandering river of the same name, the pomegranate is undoubtedly the pride of southern Afghanistan, and long a valuable export. Farmers whose families have worked the orchards for most of remembered time mark their hauls so buyers and exporters know from where it came.

The red fruit is traditionally exported to Pakistan, India and sometimes the Persian Gulf, but recent border restrictions and airport closings since the Taliban’s seizure of power have made trade extremely difficult. The border with Pakistan is sometimes closed and sometimes open, a fitful pattern that antagonizes the Afghan pomegranate farmers and buyers to no end as they try to time their harvests, sales and exports.

In October last year, a Taliban offensive pierced into the heart of the district in the middle of the harvest, with government and Taliban front lines arrayed along the river. Insurgent homemade explosives littered the orchards, killing farmers who ventured within to tend to their crops. The fighting cut off important roads, preventing fruit from making it to market.

Pomegranates died on their branches as field hands waited for the airstrikes and mortars and bursts of machine gun fire to stop.

The fighting finally ended when Kandahar fell to the Taliban in August, leaving abandoned police outposts in the district, Taliban foxholes in orchards and burned trees as evidence of the violence that tore through the idyllic area of interconnected fields and dusty roads.

Safiullah, 21, a Taliban fighter from a neighboring district who has been tasked with patrolling Arghandab as a newly anointed police officer, explained that over the past year he had sneaked through many pomegranate orchards, alone, to fire on government troops.

“Whole gardens were destroyed by airstrikes and mortars,” he noted, staring at a cut branch that had clearly been pierced by a bullet. “I feel sad, watching the beauty of this garden destroyed.”

At nearly 80, Lewanai Agha has harvested pomegranates his entire life. He kept on while also fighting in the Soviet war in the 1980s as an insurgent, surviving the civil war and the rise of the Taliban in the 1990s and the failed U.S. invasion that began in 2001. But this last year was the one that broke him, he said.

In 2019, Mr. Agha made roughly $9,300. In 2020: about $620, though then he was still able to keep a cheerful demeanor despite the violent Taliban offensive that tore through his orchard. This year, Mr. Agha, surveying just two mounds of pomegranates, spoke defeatedly, staring at the ground. That was his entire harvest, he said, and next year there will probably be poppy stalks in a portion of this orchard.

“We have been left in misery by all,” Mr. Agha said. Six members of his family were killed during the fighting in the months since the last harvest. “Eat a pomegranate and leave everything behind, it’s not worth talking about.”

For many years, opium brought lower profits than pomegranates per hectare, but what it does offer is financial security. Opium can keep for longer and needs far less irrigation than pomegranates. And selling and distributing the illicit substance often relies on a network of smugglers inside the country, so closed borders are no longer a problem.

“Farmers are rational actors,” said David Mansfield, an expert on illicit economies. “They can see the increased risks of continuing to cultivate pomegranate.”

It was as if Mr. Agha and Arghandab itself had finally been defeated after enduring decades of abuse. Wells now need to be deepened. Orchards and fields had to be cleared of improvised explosive devices. Some farmers dispatched flocks of sheep to trigger the bombs, or hired locals. Burned trees were cut and replanted and shell craters filled with dirt.

Hamidullah, 35, a pomegranate buyer who goes by only one name, has purchased the fruit from Arghandab’s orchards and shipped them to markets in the city and beyond for the last decade. He quietly observed that “if the situation remains the same, we’re afraid there will be no more trees left in the next few years.”

At another time, the decision to replace portions of his pomegranate orchard may have been unthinkable. But in recent years, Mr. Omar had lost thousands of dollars on overhead, such as fuel for his irrigation pumps and field-hand salaries, without a return on those investments.

Enter the Taliban and poppy. The insurgents-turned-rulers have had a complicated relationship with the crop. During their first regime, the Taliban made several halfhearted attempts to restrict opium before altogether banning its cultivation on religious grounds in the late 1990s and in 2000. But after they were toppled by the United States, the Taliban dove into the industry, using the illicit profits to fund their insurgency against the most powerful military in the world.

The Taliban in Arghandab district have given farmers a pass to grow the crop given the hardships of the last few seasons, residents say. A few seasons of poppy growth might yield a lower than expected return, explained Mr. Hamid, the farmer who destroyed his orchard. But if the country’s Taliban rulers again clamp down, it will be a cash windfall as supplies dwindle. Or at least that is what he and other poppy farmers are counting on.

Though the Taliban indicated a desire to ban production of the drug after the group took power in August, in an interview on Tuesday, the Taliban spokesman Zabihullah Mujahid said that there was no plan to stop or eradicate poppy cultivation.

“Our people are going through economic crisis, and stopping people from their only means of income is not a good idea,” Mr. Mujahid said, but added that the Taliban were encouraging farmers to “find alternatives.”

Poppy growth in Afghanistan has steadily increased in past years despite the billions of dollars spent by the United States and others on counternarcotics efforts. The total area under poppy cultivation in Afghanistan was estimated at 224,000 hectares — almost 900 square miles — in 2020, a 37 percent increase from 2019, according to a United Nations report.

“It is shameful, we know, but we are compelled. What else can we do?” Mr. Omar said of growing poppy, standing a few yards from where Mr. Agha continued to toss away soured pomegranates. “Everyone is cutting trees.”