In Her Last Works, Kaari Upson Explores Vanity and Decay 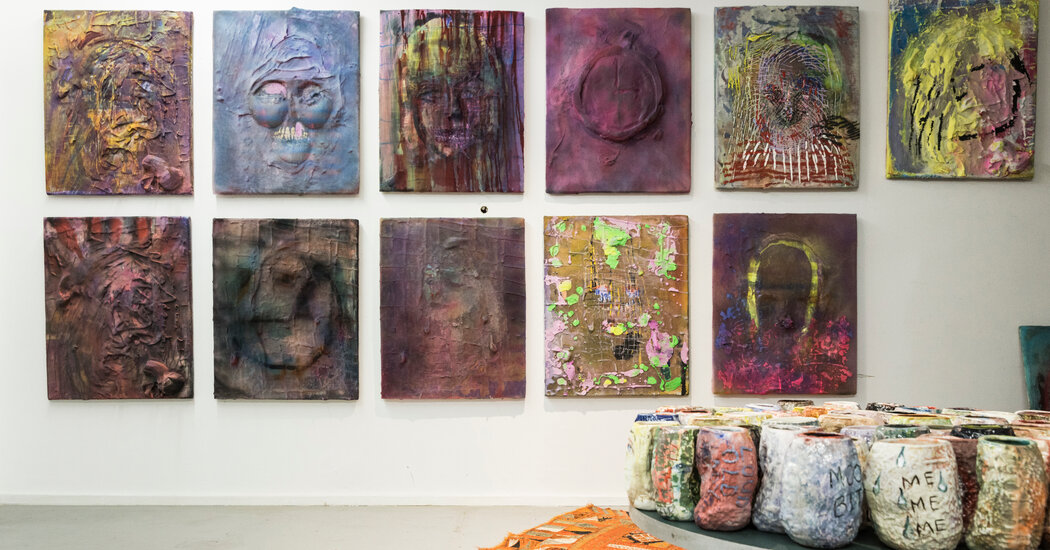 LOS ANGELES — On a visit last month to Kaari Upson’s studio here, it looked like she just left to grab a cup of coffee or maybe one of the “garbage burritos” she loved so much. Her art was everywhere: new paintings and drawings covering the walls, with recent sculptures of tree trunks — made to look like knobby-kneed legs — hanging from the ceiling. Outside, on the back patio, was a used mattress — one of her favorite objects for casting in silicone because of its associations with trash, sex and sickbeds. Her pickup truck, a gray Toyota Tundra, was still parked in back. The whiteboard on the wall still had to-do notes in her handwriting.

The artist, known for making smart, darkly obsessive sculptures, videos and drawings that capture the stubborn pathologies of family trauma and American hedonism, had last stepped foot in the space in June 2021 before flying to New York to see her doctor at Sloan Kettering. There she discovered that her breast cancer, already metastatic, had advanced. In August, after a nine-year battle with cancer, she died in the hospital at age 51, leaving behind a teenage daughter, Esmé Rudell.

She also left behind a surprising amount of new work, created during the pandemic when, for health reasons, she didn’t have studio assistants coming and going. Five series were at various stages of completion, from dozens of lumpy, slogan-bearing ceramic cups, made from a mold of a furball from her cat Bandit, to a set of brilliantly colored, elusively rendered resin-based portraits that will debut at the Venice Biennale in April as part of Cecilia Alemani’s group show, “The Milk of Dreams.” The gallery representing her estate, Sprüth Magers, is also planning to show a selection of new work in its Los Angeles branch from Aug. 6 to Oct. 8.

“At some level, I think she knew she was going to die and wanted to make as much work as she could for Esmé before she did,” said Ali Subotnick, who curated her earliest museum shows, at the Hammer Museum in 2007 and 2009. “She always worked furiously. Even watching the ‘Real Housewives,’ which was work for her because it was research, she was always drawing.”

The vivid, sometimes lurid, resin paintings heading to Venice test the integrity of the human body. In the series, called “Portrait (Vain German)” with a nod to her German-born mother, the faces shown are swollen, fragmented or disfigured. Upson started them a few months before her mother’s death from melanoma in April 2020 and made 40 in all, including some with clock faces instead of human ones, before she too ran out of time. Ten will appear in Venice.

But if these portraits reference her mother, this is also self-portraiture of the most probing and unforgiving kind, with sad clown-like faces, startling skeletal grins and bulging cartoony eyeballs, done in strident colors like mustard and magenta. Flashes of blonde hair and blue eyes connect the works to both artist and mother and the vanity of maintaining physical beauty in face of aging and illness. The Vain Germans can also be seen as a contemporary take on Vanitas paintings from the Renaissance, which famously used human skulls and timepieces to symbolize the brevity of life.

Born in San Bernardino, Calif., in 1970, Upson grew up with a sense of encroaching violence, “not just crime but natural violence — there’s a lot of fires, windstorms, mudslides,” she once told The New York Times critic Jason Farago in Even magazine. Her career took off while she was still in graduate school at CalArts with a highly obsessive investigation into the life of a stranger, a playboy neighbor of her parents known as “Larry.” She either discovered or stole his diaries and other mementos, depending on when you asked her, and, from 2005 to 2011, mined them for paintings, videos and more.

“The Larry Project” quickly brought her critical attention — and comparisons to the French privacy-invading artist Sophie Calle. But her interest in exposing the seamy underbelly of California dreaming put her firmly in the abject and uncanny territory of the artists Paul McCarthy and Mike Kelley, and she went on to gain acclaim for making silicone and urethane casts of used, sometimes soiled, domestic objects like mattresses. “Body and stain are always in my work,” she said in 2015. She also described in that interview her interest in “the orifices, the navels and anuses” of household objects.

With the Vain German work, she returned to painting and turned even more directly toward the vulnerability of the human body. Some teeth are cracked or missing; some heads don’t have hair. Margot Norton, who curated her 2017 survey at the New Museum, said she found the new series “incredibly brave.” She compared it to “a calendar where different portraits capture fleeting moments or moods. Some are really tortured and some are lighter. I have this feeling she was marking time.’’

The centerpiece at the New Museum show was a dizzying Costco-sized display of dummies showing the artist wearing her mother’s plaid shirt and bluejeans. A disturbing new sculpture in the studio also plumbs family dysfunction, showing Upson dressed as her mother, stabbed in the back with bottles of Smirnoff vodka, her father’s favorite brand.

While he was raised in San Bernardino, the artist’s mother was born in Chemnitz, Germany, during World War II and emigrated to California in her 20s. Subotnick believes that Upson grew especially curious about her maternal roots after traveling to Germany in 2019. “Kaari was obsessed with her mom’s obsession with TV documentaries on German history, Nazis and Jews. She was trying to get to know her mom,” Subotnick said.

“But the more I think about her work and go through the archives, the notes and drawings, I think she was always trying to figure out who she was by merging her identity with these important figures in her life,” the curator added, comparing the new work to her so-called “kiss paintings” from the Larry Project, where she smashed portraits of her face and his together, canvases still wet, to fuse — or obliterate — their identities.

Michael Benevento, a close friend and local gallery owner who became Upson’s de facto studio manager and assistant during the pandemic, had another take on the new work. “I think she was exploring this Aryan ideal of beauty, the way people try to make themselves look beautiful by dyeing their hair blonde and wearing blue contacts,” he said, though quickly noting that in Upson’s hands the effect verges on the vulgar: “It’s an ugly beauty.” (Benevento and Subotnick are now both working with the estate.)

The process for making the Vain German portraits allowed for a sense of ugliness or awkwardness as well. The works originated with much smaller paintings — 5 by 4 inches — where Upson outlined hints of faces and incorporated materials like a clump of her own hair.

Next a machine carved a foam board manufactured based on a scan of a miniature, but because the board was so much larger, details got blurred or mangled along the way. She had previously experimented with this sort of deliberate distortion when blowing up dollhouse furnishings to life-size and supersized proportions for her 2019 Venice Biennale installation, “There Is No Such Thing as the Outside.”

She then used the foam boards to make silicone molds, which she filled in, painted and drew on with a mix of mediums: spray paint, urethane, pigment-tinted resins and acrylic markers. (She often reused a single mold to make different portraits, creating family resemblances.) At this stage, too, she relinquished some control. Working in the cavity of the mold, she was painting what would become the topmost, visible layer of each inches-thick portrait first and the underneath layers afterward, so she couldn’t always see the marks or colors that came before. It was a self-imposed constraint that, much like Georg Baselitz’s inverted paintings, proves disorienting for artist and viewer alike.

Upson called them “blind paintings” according to Benevento, who was so hands-on with the fabrication that he regularly wore a hazmat suit to pour the urethane and resin. “She couldn’t wait to see what they looked like,” he said. Subotnick compared the entire process to a game of “telephone,” where the message can be scrambled at every relay. Overall, she said, it was an example of “controlled chaos.”

When first seeing the portraits in person about a year ago, Subotnick said she could tell Upson was “really onto something — she had gotten to the point in the process where she felt they were working.”

With previous series, Subotnick added, “she would find some new experimental technique and exploit it as much as she could. Then, once she solved the riddle of how to make something out of these materials, she would move on.” But the Vain Germans weren’t so easily mastered, the curator suggested. “This time she found the sweet spot where she was still excited.”