In Races to Run Elections, Candidates Are Backed by Key 2020 Deniers 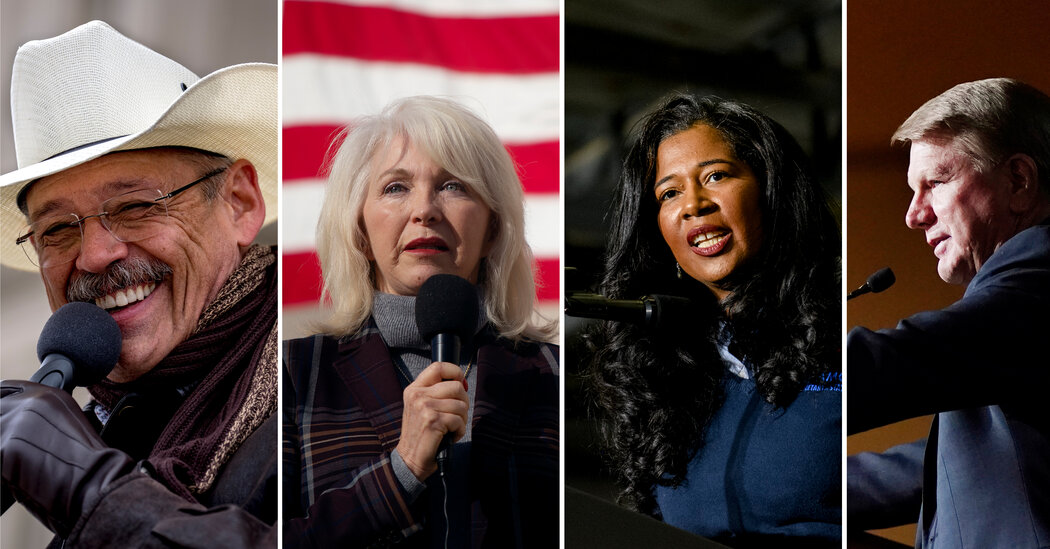 Key figures in the effort to subvert the 2020 presidential election have thrown their weight behind a slate of Republican candidates for secretary of state across the country, injecting specious theories about voting machines, foreign hacking and voter fraud into campaigns that will determine who controls elections in several battleground states.

The America First slate comprises more than a dozen candidates who falsely claim the 2020 election was stolen from Donald J. Trump. It grew out of meetings held by a conspiracy-mongering QAnon leader and a Nevada politician, and has quietly gained support from influential people in the election denier movement — including Mike Lindell, the MyPillow founder, and Patrick Byrne, the former Overstock.com executive who has financed public forums that promote the candidates and theories about election vulnerabilities.

Members of the slate have won party endorsements or are competitive candidates for the Republican nomination in several states, including three — Michigan, Arizona and Nevada — where a relatively small number of ballots have decided presidential victories. And in Pennsylvania, where the governor appoints the secretary of state, State Senator Doug Mastriano, who is aligned with the group, easily won his primary for governor last month.

The candidates cast their races as a fight for the future of democracy, the best chance to reform a broken voting system — and to win elections.

“It doesn’t really matter who’s running for assembly or governor or anything else. It matters who is counting the vote for that election,” said Rachel Hamm, a long-shot contender in California’s primary on Tuesday, at a forum hosted by the group this year.

But even in losing races, the slate has left its mark. As they appeal for votes on the stump and on social media, the candidates are seeding falsehoods and fictions into the political discourse. Their status as candidates amplifies the claims.

The information being tossed out under the guise of election reform, particularly the machine manipulation of votes, threatens to corrode Americans’ trust in democracy, said John Merrill, the Republican secretary of state in Alabama. “What you do is you encourage people not to have confidence in the elections process and people lose faith.”

In private weekly calls that stretch on for hours on Friday mornings, the candidates discuss policies and campaign strategy, at times joined by fringe figures who have pushed ploys to keep Mr. Trump in power. In 11 states, the group has sponsored public forums where prominent activists unspool intricate conspiracy theories about voting machines and issue dark warning about forces they claim are manipulating the system. Democrats, communists, establishment Republicans and Mark Zuckerberg, the Facebook mogul, all feature prominently, as does the billionaire George Soros, who has long been at the center of right-wing, often antisemitic tropes.

“These are evil, evil people,” Tina Peters, a county clerk and candidate in Colorado, said at a recent forum, speaking of the people she believes are working against her. She described her opposition as Mr. Zuckerberg and Mr. Soros “in woman form” and compared herself to David slaying Goliath. “I needed to run with my sword right into the belly of the beast and split it open.”

Understand the 2022 Midterm Elections So Far

After key races in Georgia, Pennsylvania and other states, here’s what we’ve learned.

Secretary of state races were once sleepy affairs, dominated by politicians who sought to demonstrate their bureaucratic competence, rather than fierce partisan loyalty. But Mr. Trump’s attempts to overturn the results — including his failed attempt to pressure Brad Raffensperger, Georgia’s secretary of state, to “find” votes to reverse his loss — has thrust the office’s power into the spotlight.

Since its founding last year, the America First slate has ballooned from a handful of candidates to a high of around 15. Many have little chance of succeeding. On Tuesday, Ms. Hamm will compete to place among the top two candidates in California, and Audrey Trujillo, who is running unopposed in New Mexico, will cinch her G.O.P. nomination. Neither candidate is favored to beat Democratic opponents in their solidly blue states.

But America First candidates could be competitive in at least four battleground states: Nevada, Arizona, Pennsylvania and Michigan. Two of them have already scored primary victories in these states: In Michigan, Kristina Karamo, a novice Republican activist who gained prominence challenging the 2020 results there, won her party’s endorsement at an April convention, all but securing her nomination in August. The Republican primary winner for Pennsylvania governor, Mr. Mastriano, was involved in an effort to keep the state’s electoral votes from President Biden in 2020. He has said he wants to cancel all voter registrations and force voters to re-register.

A leading candidate in Nevada’s primary next week is Jim Marchant, one of the organizers of the America First slate. The former state assemblyman and another candidate won the endorsement of the central committee of the state Republican Party, giving them a boost before voters go to the polls on June 14. The group’s candidate in Arizona, Mark Finchem, is a leading contender and the top fund-raiser in the primary race.

Mr. Marchant has said he was urged to start the coalition by unnamed people close to Mr. Trump. The project picked up steam in the spring of last year, after Mr. Marchant attended a meeting of activists hosted by a man known in QAnon circles by the alias Juan O’Savin, according to an account from one of the people involved in the group.

Major figures in the election denier movement were drawn in. In May 2021, when Mr. Marchant organized an all-day meeting in a suite at the Trump International Hotel Las Vegas, Mr. Lindell appeared remotely briefly. Soon after, the group gathered again at a distillery in Austin, Texas, according to two people who attended the meeting.

The host of that session was Phil Waldron, a retired Army colonel and a leading proponent of a machine-hacking theory involving Communists, shell companies and Mr. Soros. Mr. Waldron is perhaps best known for circulating a PowerPoint presentation that recommended Mr. Trump declare a national emergency to delay the certification of the 2020 results. The document made its way to the inbox of the White House chief of staff, Mark Meadows, and is now part of the congressional investigation into the deadly riot at the Capitol on Jan. 6.

The group posted a platform that calls for moving to paper ballots, eliminating mail voting and “aggressive voter roll cleanup.”

In recent months, the core group has been recruiting new candidates. Around 25 people, including some of the candidates and people seeking to influence them, join the weekly conference calls, according to some of the candidates who were recruited. The group discusses campaigns and policy ideas, including how to transition to hand-counting all ballots — a notion election experts say is impractical and can lead to errors and cause chaos.

Mr. Byrne, who spent millions on the discredited “audit” of votes in Arizona, has taken particular interest in sponsoring public forums. He has pledged to spend up to $15,000 on each event, and has contributed around $83,000 to a political action committee controlled by Mr. Marchant.

In an interview, Mr. Byrne said he is primarily interested in spreading ideas about “election integrity and how it needs to be fixed” rather than promoting specific candidates for office.

Why are these midterms so important? This year’s races could tip the balance of power in Congress to Republicans, hobbling President Biden’s agenda for the second half of his term. They will also test former President Donald J. Trump’s role as a G.O.P. kingmaker. Here’s what to know:

What are the midterm elections? Midterms take place two years after a presidential election, at the midpoint of a presidential term — hence the name. This year, a lot of seats are up for grabs, including all 435 House seats, 35 of the 100 Senate seats and 36 of 50 governorships.

What do the midterms mean for Biden? With slim majorities in Congress, Democrats have struggled to pass Mr. Biden’s agenda. Republican control of the House or Senate would make the president’s legislative goals a near-impossibility.

What are the races to watch? Only a handful of seats will determine if Democrats maintain control of the House over Republicans, and a single state could shift power in the 50-50 Senate. Here are 10 races to watch in the House and Senate, as well as several key governor’s contests.

When are the key races taking place? The primary gauntlet is already underway. Closely watched races in Pennsylvania, North Carolina and Georgia were held in May, with more taking place through the summer. Primaries run until September before the general election on Nov. 8.

Go deeper. What is redistricting and how does it affect the midterm elections? How does polling work? How do you register to vote? We’ve got more answers to your pressing midterm questions here.

“I see them as gatherings of highly concerned citizens,” Mr. Byrne said.

There is no evidence of widespread fraud in the 2020 election and claims that voting machines were hacked have been thoroughly debunked by election officials from both parties.

But there was no mention of that reality at the Dallas forum. Speakers issued dire warnings about a shadowy cabal using technology to steal elections around the world. They dove deep into well-worn conspiracy theories linking U.S. voting systems to Venezuelan elections and international organizations.

“They took something that belonged to the people — our vote, our right to have a say. They translated it into a language none of us can speak and they put it in the hands of private companies and N.G.O.s” said Lara Logan, a former CBS journalist who moderated the event. “They took the ability to cheat to a global scale.”

Ms. Peters, the Colorado candidate, claimed the tide was turning. “We’ve got the fuel now. We’ve got the proof,” she said.

Ms. Peters, who is the county clerk in Mesa County, is under indictment related to allegations that she tampered with elections equipment, and a judge has barred her from overseeing this year’s elections.

Ms. Peters and her lawyer did not respond to a request for comment. Her campaign has said her legal troubles amount to a political witch hunt.

Other speakers included Russell J. Ramsland Jr., a Texas businessman whose firm produced a widely circulated report that Mr. Trump and his associates presented as evidence of fraud. The report, which focused on results in one Michigan county, was later debunked by Republicans in the State Senate.

Mark Cook, a technology consultant who has worked for Mr. Lindell, also spoke to the group, telling them that “this system controls our freedom.”

In a statement to The New York Times, Mr. Cook said he hoped his work would “make our election system more accurate, more transparent and more understandable by the public.”

Mr. Lindell told The Times he has gotten involved because he believes “most” secretaries of state are corrupt and should all be replaced.

“They let our country be taken through computers,” he said.

Some of the candidates have aired similar ideas on the campaign trail. In Nevada, Mr. Marchant has called to decertify Dominion voting machines, and urges the use of paper ballots in a state that first began allowing machines to count votes in 1951. “Your vote hasn’t counted for decades,” Mr. Marchant said in a February debate, according to the Nevada Independent. “You haven’t elected anybody.”

In an interview on Facebook in March, Ms. Trujillo, the New Mexico candidate, asserted that U.S. voting systems are “no better than any other communist country like Venezuela or any of these other states where our elections are being manipulated.” She called the 2020 presidential election a “coup.”

And in Arizona, Mr. Finchem has sued to try to ban the use of voting machines in the November elections. Mr. Lindell says he is financing the lawsuit.

Mr. Marchant, Ms. Trujillo and Mr. Finchem did not respond to requests for comment.