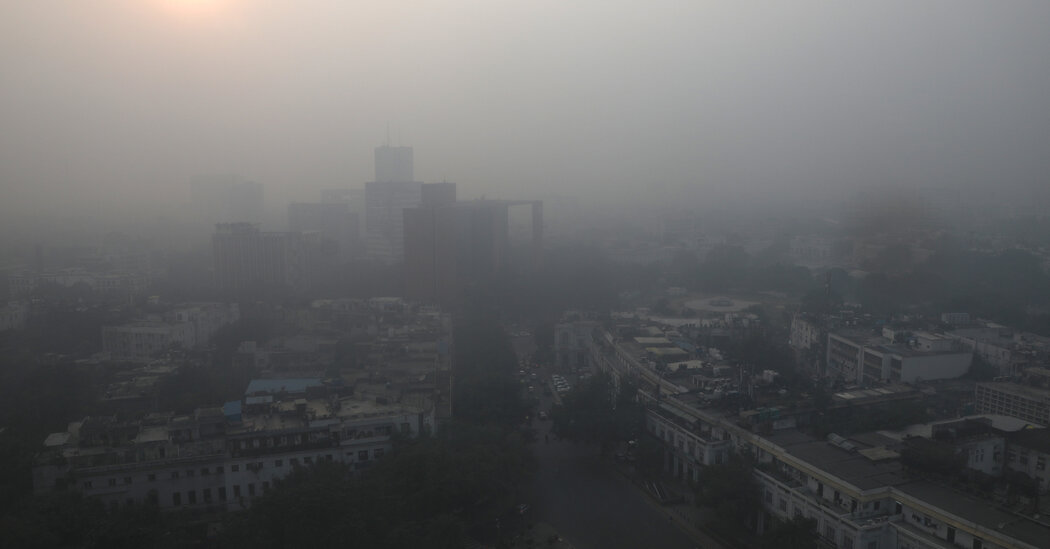 NEW DELHI — A thick blanket of noxious haze has settled over the Indian capital of New Delhi, burning eyes and lungs, forcing schools to close and prompting ardent calls from residents for action.

India’s leaders have responded with what has become an annual tradition: by pointing fingers at one another.

The central government, run by Prime Minister Narendra Modi, is accusing city officials of inaction, and vice versa. The country’s Supreme Court has stepped in to shut down factories and order farmers to stop burning fields. But the court’s other efforts, which last year included ordering the installation of a pair of air-scrubbing filter towers, have been derided as ineffectual.

The airborne murk and the towers stand as symbols of India’s deep political dysfunction. The choking pollution has become an annual phenomenon, and the country’s scientists can accurately predict the worst days. But deep partisanship and official intransigence have hindered steps that could help clear the air.

New Delhi’s residents don’t agree who is at fault, but they agree that more must be done.

“These last three weeks I became a refugee. I was so sick that I couldn’t take it anymore,” said Jai Dhar Gupta, the owner of a business that sells air pollution mitigation tools, such as home air purifier machines and face masks.

Mr. Gupta, who now lives between Delhi and Mussoorie, a city in the foothills of the Himalayas that boasts better air, became an antipollution activist and entrepreneur in 2013, after developing asthma.

“It’s really sad for a nation where every time there is a health emergency the Supreme Court needs to intervene. That tells you everything about the apathy toward the health and life in our country,” said Mr. Gupta. “Nobody cares.”

The court stepped in over the weekend in response to a petition filed by an 18-year-old environmental activist and after the city had endured pollution levels comparable to levels generated by major wildfires. It criticized officials for what it called their “don’t take any step” position.

Earlier this week, Delhi’s emergency measures went into effect. Construction activity, diesel generators and trucks were banned. Schools were closed and employers were asked to keep half of their staffs at home. Six power plants outside New Delhi were ordered shut down.

Under pressure from the court, city officials also deployed other steps that have inspired more jokes than optimism. They include anti-smog guns that create artificial mist, fire trucks to douse the streets with water and chemical dust suppressants.

“These are hardly measures,” said Bhavreen Kandhari, a member of Warrior Moms, a group of mothers lobbying for cleaner air. “These are reactions, knee-jerk reactions. Till you have the political intent, you know nothing is going to happen.”

Broadly, India’s air quality suffers from its appetite for fossil fuels, which has only grown after two decades of rapid economic growth. Last year, India was home to 15 of the 20 cities with the most hazardous air globally, and health experts have detailed how such conditions can lead to brain damage, respiratory problems and early death.

Weaning the country off coal and other dirty fuels will be difficult, a reality underscored by climate negotiations that took place in Glasgow, Scotland, this month. India already struggles to meet its basic power needs. During the Scotland talks, India and China teamed up to insist upon a last-minute amendment to the language of the accord, to “phase down” coal rather than ease it out.

Mr. Modi argues that India’s increasing use of coal and other fossil fuels is helping build an economy that is lifting millions out of poverty. But emissions from burning coal make the pollution problem worse for city dwellers, particularly the poor, who cannot afford air purifier machines or the electricity to run them.

Cities also suffer from growing car emissions and the fires that the poorest residents burn to cook food and keep warm, especially when colder weather hits in November. New Delhi’s air quality takes a particular hit from the burning of crop stubble by farmers in the neighboring states of Punjab and Haryana. The bad air settles over the Indo-Gangetic plain of northern India, trapped on either side by the Thar Desert and the Himalayas, forming a toxic stew.

Mr. Modi’s government says that Delhi, which is run by an opposition political party, has failed to enforce its own pollution-reduction policies, such as a limit on vehicular traffic on days when pollution surges. Earlier this week, Adesh Gupta, the Delhi president of Mr. Modi’s Bharatiya Janata Party, said that Delhi’s top elected official, Arvind Kejriwal, should resign.

“Instead of making Delhi a world-class city as he claimed, Kejriwal has made it a smog city,” Mr. Gupta said.

Delhi officials in turn say Mr. Modi’s government has failed to persuade farmers in nearby states to stop clearing their fields with fires.

“Farmers in neighboring states are compelled to burn stubble as their governments are doing nothing for them,” Mr. Kejriwal said.

The Supreme Court stepped in last year, too, ordering the two sides to take steps like enforcing a ban on farm fires and capturing power plant emissions. It also ordered Delhi early last year to build the two experimental smog towers, despite experts’ doubts about their impact. A study last year in the peer-reviewed journal Atmosphere called the approach unscientific.

“Can we vacuum our air pollution problem using smog towers? The short answer is no,” the researchers said.

Still, they are a tempting refuge for people desperate to escape the city’s bad air.

As a coppery sun set behind smoky skies, Jasmer Singh rested under a smog tower in central Delhi as it sucked in polluted air. A monitor measuring the levels of dangerous particulate matter showed that the air it spit out was slightly cleaner, but far from what the World Health Organization considers safe.

Still, Mr. Singh, a volunteer at a nearby Sikh temple, said, “around here, the air is good, lighter and better.”

Some members of both Mr. Modi’s party and the opposition say they want to take a serious, nonpartisan look at the problem.

“The blame game will be always there,” said Vikas Mahatme, a lawmaker with the B.J.P. Summing up the attitudes of many politicians, he said, “Why one should bother about other states? They are not voters to consider.”

Still, getting all sides to work together will be difficult, he acknowledged. “We are not very active,” he said. “I tell you freely.”