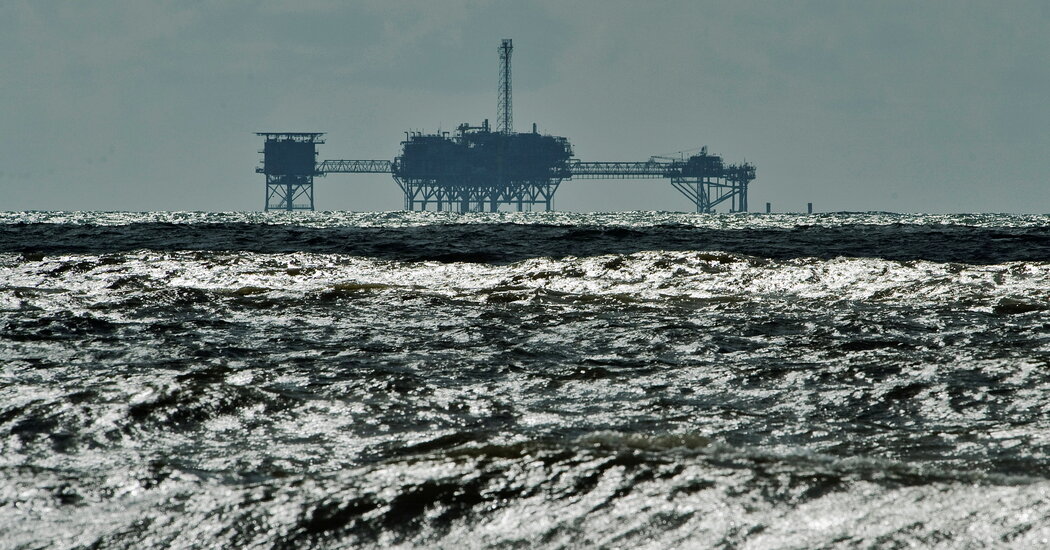 WASHINGTON — The Interior Department on Friday recommended that the federal government raise the fees that oil and gas companies pay to drill on public lands — the first increase in those rent and royalty rates since 1920.

The long-awaited report recommended an overhaul of the rents and royalty fees charged for drilling both on land and offshore, noting one estimate that the government lost up to $12.4 billion in revenue from drilling on federal lands from 2010 through 2019 because royalty rates have been frozen for a century.

The Interior Department said its goal is to “better restore balance and transparency to public land and ocean management and deliver a fair and equitable return to American taxpayers.”

But the report was nearly silent about the climate impacts from the public drilling program. The United States Geological Survey estimates that drilling on public land and in federal waters is responsible for almost a quarter of the greenhouse gases generated by the United States that are warming the planet.

That silence angered some environmentalists, who want the federal government to consider the climate impact of drilling when it weighs approval of new leases. That would be a first step toward ending new oil and gas drilling on public lands, something President Biden had promised when he ran for office.

The report comes as rising gas prices have created political headaches for the Biden administration and prompted calls from Republicans for increased domestic gas and oil production. On Tuesday, Mr. Biden said he would release 50 million barrels of oil from the nation’s emergency stockpile to try to lower energy prices.

Oil and gas industry representatives warned Friday that raising fees would cause prices to skyrocket and undermine energy security.

“You know there’s something wrong with a policy when it’s released on a Friday and even more so when it’s a holiday weekend,” said Kathleen Sgamma, president of the Western Energy Alliance, which represents oil and gas companies.

Frank Macchiarola, a senior vice president at the American Petroleum Institute, a trade group, said in a statement the Biden administration is sending mixed signals by releasing emergency oil reserves and then proposing to raise costs for the industry. It suggests the administration has “no clear roadmap for the future of federal leasing,” he said.

Meanwhile, environmentalists said they were concerned that the Biden administration was backtracking on a central climate pledge.

Brett Hartl, director of government affairs for the non-profit Center for Biological Diversity, called the 18-page report a “massive betrayal” of the president on climate change.

Mr. Hartl said environmental groups had expected the agency to review the fossil fuel leasing program, taking into account the environmental harms of drilling at the local level as well its contribution to the global climate crisis. He said the report, which barely mentioned climate change, “isn’t worth the paper it was written on.”

As a candidate, Mr. Biden promised to stop issuing new leases for drilling on public lands. “And by the way, no more drilling on federal lands, period. Period, period, period,” Mr. Biden told voters in New Hampshire in February 2020.

This month, he appeared at a global climate summit meeting in Glasgow to urge other world leaders to take bold action to cut emissions from oil, gas and coal. Mr. Biden has pledged to cut United States greenhouse gas emissions by 50 to 52 percent below 2005 levels by the end of this decade. Interior Secretary Deb Haaland is a former environmental activist and former member of Congress who had a campaign website that included this quote from her: “We need to act fast to counteract climate change and keep fossil fuels in the ground.”

But last week, the Biden administration offered up to 80 million acres in the Gulf of Mexico for drilling leases — the largest sale since 2017. The administration was legally obligated to hold the lease sales after Republican attorneys general from 13 states successfully overturned a suspension on sales that Mr. Biden had tried to impose. Shell, BP, Chevron and Exxon Mobil offered $192 million for the rights to drill in the area offered by the government.

The Mineral Leasing Act of 1920 set up a system to allow private companies to lease public lands to extract oil and gas from the ground. Companies pay rent until the lease starts to produce gas or oil and then pay royalties based on the amount of fossil fuel extracted. Royalties have remained unchanged for a century. In 1953, Congress passed the Outer Continental Shelf Lands Act to govern drilling in federal waters. Both laws set up a system that requires the government to auction leases at regular intervals.

Upon taking office, Mr. Biden issued an executive order calling for a temporary ban on new oil and gas leasing on public lands, which was to remain in place while the Interior Department produced a comprehensive report on the state of the federal oil and gas drilling programs.

Ms. Haaland sent the report to the White House in June.

The report’s recommendations to raise drilling fees are largely in line with legislation now making its way through Congress. The sweeping $2.2 trillion social policy and climate bill that passed the House of Representatives last week includes provisions that would increase federal royalty rates for oil and gas companies.

Multiple studies from government and fiscal watchdog groups have concluded that the federal government underestimates the value of the oil and gas resources on public lands, and undercharges companies for extracting the fuels.

In addition to raising rents and royalties, the report recommended an increase the current minimum level for bonds. Companies have abandoned thousands of wells on public lands, which frequently leak methane and pose other hazards. But the current bond level is not enough to cap and clean them, leaving taxpayers to foot the costs.

The Interior Department could enact some of the proposed changes through regulation, but most of the recommendations in the report would require congressional action.

Even at their current levels, the royalties are still a major source of revenue: the federal government has so far collected $9.6 billion this year from drilling on public land and in federal waters, up from $8 billion last year.

As one way to raise revenue for the $2.2 trillion spending bill, Democrats included provisions in the legislation that would raise onshore oil and gas drilling royalty rates from 12.5 percent to 18.75 percent and set offshore rates at “not less than 14 percent.” At auctions of federal oil and gas leases on public lands, it would increase the minimum bid from $2 an acre to to $10 an acre. And it would increase the annual rents that companies must pay to the federal government to lease the land. According to the Congressional Budget Office, those changes would bring in about $2.5 billion in new revenue by the end of the decade.

Environmental advocates said they supported raising those fees and royalties, but added that the increase would not slow drilling or climate change.

“That’s the stuff that needs to happen,” said Joel Clement, who resigned from the Interior Department in protest during the Trump administration, and now serves as a senior fellow at the Harvard Kennedy School. “But it’s a first-base hit, not a double or a home run. And at this point, we have to have a home run on leasing on public lands. It’s one of the immediate climate levers that can bring real change. The leasing program must account for climate emissions. That’s how you get to a lasting moratorium on drilling.”

Mr. Clement and other climate policy experts said the Interior Department should incorporate the potential climate impacts of leasing oil and gas drilling into the assessments required by the 1970 National Environmental Policy Act, which says the government must consider ecological damage when deciding whether to permit drilling and construction projects.

If all assessments of the impacts of drilling on public lands were required to include the potential warming impact of burning the fuels within the leases, experts said, that would create the legal groundwork for the government to stop issuing new drilling leases.

But moving forward with such a policy would quite likely face political blowback from Republicans, the oil industry and Democrats in oil and gas states. That could also complicate the administration’s efforts to steer its broader spending bill through a razor-thin Democratic majority in Congress.

“The political tightrope is vexing, but the bottom line is that we have to end oil and gas leasing on public lands,” Mr. Clement said. “It’s not an exaggeration to say that doing so would change the global conversation on the energy transition.”