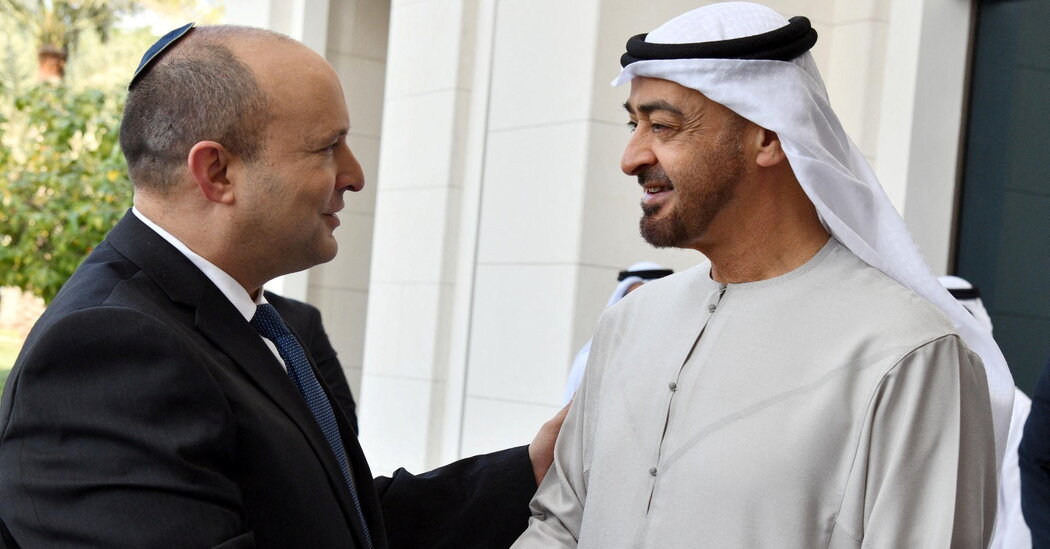 JERUSALEM — The Israeli prime minister met the crown prince of the United Arab Emirates on Monday on the first official visit by an Israeli leader to the Gulf state, a historic encounter that would have been unimaginable a few years ago and showcased the rapid realignment of the Middle East, driven by shared fears of a nuclear Iran.

“I’m flying back to Israel, very optimistic that this relationship can set an example of how we can make peace here in the Middle East,” Mr. Bennett said in a video released shortly before his departure to Israel.

Ostracized for years by all but two Arab countries, Israel began to establish formal relationships with four others, including the United Arab Emirates, in August 2020. Mr. Bennett’s visit was a testament to both the speed at which Israel has consolidated some of those relationships in the 15 months since, and the primacy of concerns about Iran for some Arab leaders, even above their longstanding demands for a resolution to the Israeli-Palestinian conflict.

When the meeting was done, the two leaders released a joint statement hailing it as “another milestone in the development of warm relations and a tremendous partnership forged between the two countries.” Reporters were barred from the talks, but photographs and silent video released by the Emirati government showed the two leaders chatting informally and laughing together and at one point, the prince appearing to whisper in the prime minister’s ear.

Along with their mutual fears of Iran, hopes of shared economic prosperity form the bedrock of the Israel-Emirati relationship.

Israel is keen to shore up a regional alliance against Iran at a time when negotiations have restarted between Tehran and a U.S.-backed alliance including Britain, France, Germany, Russia and China.

Iran remains a major threat to Emirati security and the Emiratis share Israel’s fear that Tehran will attain a nuclear bomb. They also oppose Iranian support for Shiite proxy militias active across the Middle East. But their country is a major trading partner with Iran and favors a less confrontational approach than Israel, keeping open the option of dialogue.

While the Americans and others want Iran to reduce or freeze its nuclear program, perhaps in exchange for sanctions relief, Israel wants to keep open the option of military action. And Israel opposes easing restrictions on the Iranian economy, fearing that it rewards Iran without decisively depriving it of the ability to create a nuclear arsenal in the future.

“There is no illusion about how big of a threat Iran is,” he said. “And despite all of this, it’s time to talk to Iran.”

That could potentially benefit Israel as well, Mr. Abdulla added. “The U.A.E. is in the best position to maybe carry messages between these two antagonists,” he said.

With his visit to Abu Dhabi, Mr. Bennett scored a foreign-policy victory that was denied to his predecessor, Benjamin Netanyahu, who was forced to postpone three trips to the Emirates last winter, partly because of the pandemic and partly because Emirati leaders did not want to appear with him while he was in the middle of a re-election campaign.

Mr. Bennett’s visit fell on the six-month anniversary of his taking office, a reminder that the Israeli-Emirati normalization agreement had survived the political demise of the deal’s architects, President Donald J. Trump and Mr. Netanyahu.

Israeli cabinet ministers have visited the Emirates before, but never a prime minister — until Mr. Bennett’s arrival on Sunday.

In their public statements about the meeting, shared economic interests were at the forefront.

The joint statement released after the meeting said the leaders had discussed trade, economic, climate, and food security issues, among others, and had pledged to establish a joint Emirati-Israeli research and development fund, as well as a joint business council. It did not say whether they had discussed Iran, and an Israeli official who attended the meeting declined to comment on what regional geopolitical issues were mentioned.

The official said that the Israeli-Palestinian conflict was not discussed, and that the two leaders instead spoke at length about establishing a free-trade agreement, with Mr. Bennett phoning an Israeli official during the meeting to expedite its implementation.

Once a minor player in the Middle East, the Emirates has in recent decades used its oil revenues to become a major regional force, providing funds and military assistance to allies in Yemen, Libya, Egypt and elsewhere.

For decades, it maintained only clandestine ties with Israel, choosing not to join Egypt and Jordan as the only Arab states with formal diplomatic relations with Israel. Like most Arab leaders, the Emirati royal family had long preferred to delay a détente until the establishment of a Palestinian state.

The Emiratis finally made public their relationship with Israel in August 2020, announcing the start of formal ties after Israel promised to delay the implementing of a plan to annex parts of the occupied West Bank. Deals with Bahrain, Morocco and Sudan later followed; Palestinian leaders condemned the agreements as a betrayal, while opinion polling suggested the deals were opposed by most of the Arab public.

Emirati officials have said little about the Palestinians since then.

Palestinians portrayed the meeting as a betrayal.

“This is the ultimate treason,” said Muhammad Abul Eis, 41, a driver in Gaza City. “History will never forgive and will show no mercy to the U.A.E. or any country that normalizes ties with the occupation.”

While Monday’s meeting showcased the potential of Israel’s rapprochement with the Emirates, Bahrain and Morocco, questions have been raised about the sustainability of the deal with Sudan. The two countries have not exchanged ambassadors, Sudanese officials have distanced themselves from the process, and a recent coup in Khartoum, the Sudanese capital, cast doubt over the entire arrangement.

No new deals between Israel and Arab states have been announced this year, despite hopes that Saudi Arabia — which shares many foreign policy goals with the Emirates, including an antipathy for Iran — would become the fifth country to join the process.

Despite their alliance, Saudi Arabia and the Emirates do not always act in concert. In 2019, Abu Dhabi started to pull its troops from Yemen, where they had fought alongside Saudi-led forces in a war against the Iran-backed Houthi militia. In July, the two countries clashed over oil production — the Emiratis wanted to increase it while the Saudis sought to keep it the same.

The Emirates has also been prepared to go it alone in more mundane matters.

Last week, officials announced that the United Arab Emirates would change the timing of its weekends to align with the Western calendar, and to implement a 4.5-day week.

Saudi officials have insisted that the country will not replicate the Emirati-Israeli normalization deal until Israel seals a peace deal with the Palestinians. Israel media reported that Mr. Netanyahu met in secret in November 2020 with Mohammed bin Salman, the Saudi crown prince. But Saudi officials denied it.

Initially, the Israeli government invited a group of Israel-based journalists to join Mr. Bennett in the Emirates. But it later became clear that there would be no joint news briefing nor access for journalists to the prince’s palace, where the meeting was held.

Mr. Bennett’s office later uninvited the journalists from the flight entirely, officially because of rising concerns about Omicron, the new coronavirus variant.

People in the Emirates, where dissent is rarely tolerated, used social media on Monday to praise the meeting between the two leaders. But some Emiratis abroad were far more critical.

“This scene burns the heart of every free Emirati,” wrote Ahmad Alshaibah Al Nuaimi, a London-based Emirati writer, in response to a video of Mr. Bennett’s arrival in Abu Dhabi.

In Israel, the visit was seen as another step in a gradual thaw between Israel and the Arab world.

“Any trip that is made for the purpose of creating a dialogue is good and is a welcome step, because any form of dialogue and conversation can advance Israel,” said Maayan Yamin, a 40-year-old psychologist from the city of Rehovot in central Israel. “It is a good thing he traveled.”

Reporting was contributed by Myra Noveck from Jerusalem; Asmaa al-Omar from Beirut, Lebanon; and Gabby Sobelman from Rehovot, Israel.