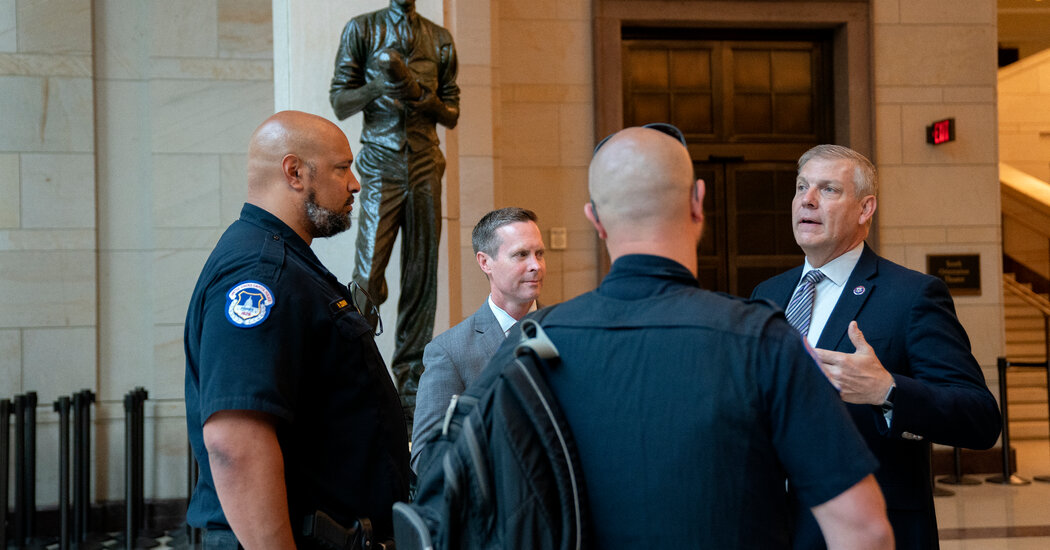 WASHINGTON — A man who toured the Capitol complex with a Republican lawmaker the day before the Jan. 6, 2021, attack later marched on the building while making threats against Speaker Nancy Pelosi and other prominent Democrats, the House committee investigating the attack said on Wednesday.

The panel released surveillance video of a tour of parts of the Capitol complex conducted by Representative Barry Loudermilk, Republican of Georgia, a day before the violence. During the tour — which lasted several hours, despite the complex being closed to the public at the time — he is seen with the group entering three different office buildings and approaching the entrances to tunnels leading to the Capitol.

Individuals on the tour photographed and recorded areas of the complex that are “not typically of interest to tourists, including hallways, staircases and security checkpoints,” the committee said.

The video that the committee released also featured footage apparently taken by a person who is marching toward the Capitol on Jan. 6, and can be heard saying, “There’s no escape, Pelosi, Schumer, Nadler. We’re coming for you.”

A committee aide said investigators had learned that the voice was that of the man seen in the surveillance footage of Mr. Loudermilk’s tour taking a photograph of a staircase in the Capitol complex.

“The behavior of these individuals during the Jan. 5, 2021, tour raises concerns about their activity and intent while inside the Capitol complex,” Representative Bennie Thompson, Democrat of Mississippi and chairman of the committee, wrote in a letter to Mr. Loudermilk, seeking for a second time to interview him.

The video gets at a charge that some Democrats leveled in the immediate aftermath of the assault on the Capitol and that the House committee investigating it has hinted at ever since: that Republican members of Congress effectively made it possible for some of the rioters to study the layout of the complex before their violent rampage.

Review the Themes of the Jan. 6 House Committee Hearings

The Capitol Police have investigated those claims, and on Monday, the force released a letter in which its chief said Mr. Loudermilk’s tour appeared to be innocuous.

“We train our officers on being alert for people conducting surveillance or reconnaissance, and we do not consider any of the activities we observed to be suspicious,” J. Thomas Manger, the chief of the Capitol Police, wrote in a letter about Mr. Loudermilk’s tour. On Wednesday, Capitol Police said they could not offer additional comments but had “cooperated extensively” with the committee.

In a statement Wednesday, Mr. Loudermilk said the committee was engaging in a smear campaign against him, causing his family and staff to receive death threats.

“As Capitol Police confirmed, nothing about this visit with constituents was suspicious,” he wrote. “The pictures show children holding bags from the House gift shop, which was open to visitors, and taking pictures of the Rayburn train.”

But the committee said that several people who participated in Mr. Loudermilk’s tour attended President Donald J. Trump’s rally on the Ellipse on the morning of Jan. 6.

The man featured in the video is heard threatening top Democrats, including Senator Chuck Schumer, the majority leader, and Representatives Jerrold Nadler and Alexandria Ocasio-Cortez, all of New York.

“We’re coming in like white on rice for Pelosi, Nadler, Schumer — even you, A.O.C.,” he says as he records the pro-Trump throng approaching the Capitol. “We’re coming to take you out and pull you out by your hairs.”

“When I get done with you, you’re going to need a shine up on top of that bald head,” he adds.

Earlier in the video, he walks alongside a second man who carries a flagpole with a sharpened end and says, “It’s for a certain person,” while making a jabbing motion.

They did not directly assert that anyone Mr. Loudermilk escorted had later attacked the Capitol. But they suggested that they had evidence that he had led visitors around the complex. They wrote that their review contradicted Republicans’ denials that closed-circuit security camera footage showed no such tours had taken place.

His letter described the tour as a “visit by constituents” and noted that the group did not enter the Capitol or its tunnel system.

Tours of the Capitol were limited at the time because of pandemic restrictions.

In a statement last month, Mr. Loudermilk conceded that he had brought the constituents into parts of the Capitol complex — though not the Capitol itself — the day before the riot, but he said the visit was harmless.

“A constituent family with young children meeting with their member of Congress in the House office buildings is not a suspicious group or ‘reconnaissance tour,’” Mr. Loudermilk wrote, adding: “No place that the family went on the 5th was breached on the 6th, the family did not enter the Capitol grounds on the 6th, and no one in that family has been investigated or charged in connection to Jan. 6.”

Shortly after the riot, more than 30 Democrats joined Representative Mikie Sherrill of New Jersey in requesting an investigation by the top Capitol security officials and the Capitol Police into what Ms. Sherrill called “suspicious behavior” and access given to visitors to the Capitol complex the day before the riot.

Ms. Sherrill said she knew of members of Congress who had given “reconnaissance” tours ahead of the attack. Republicans vehemently denied the accusations.

Mr. Loudermilk, in particular, denounced the charges and joined an ethics complaint against the Democrats who made them.