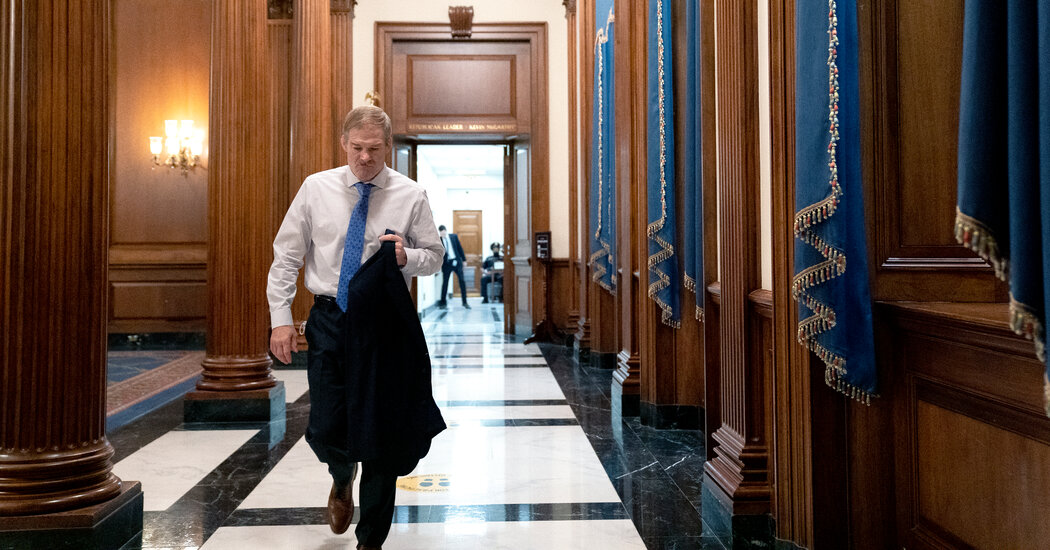 WASHINGTON — The House committee investigating the Capitol attack asked Representative Jim Jordan of Ohio on Wednesday to sit for an interview with its investigators, in the latest step the panel has taken to dig into the role that members of Congress played in trying to undermine the 2020 election.

The committee’s letter to Mr. Jordan, an ally of former President Donald J. Trump, says that investigators want to question him about his communications related to the run-up to the Capitol riot. Those include Mr. Jordan’s messages with Mr. Trump, his legal team and others involved in planning rallies on Jan. 6 and congressional objections to certifying Joseph R. Biden Jr.’s victory.

“We understand that you had at least one and possibly multiple communications with President Trump on Jan. 6,” Representative Bennie Thompson, Democrat of Mississippi and the committee’s chairman, wrote in the letter. “We would like to discuss each such communication with you in detail.”

Mr. Jordan, a Republican, was deeply involved in Mr. Trump’s effort to fight the election results. He participated in planning meetings with senior White House officials, including a gathering in November 2020 at Trump campaign headquarters in Arlington, Va., and a meeting at the White House last December, where Republican lawmakers discussed plans with the president’s team to use the joint session of Congress on Jan. 6 to challenge the election outcome.

On Jan. 5, Mr. Jordan forwarded to Mark Meadows, Mr. Trump’s chief of staff, a text message he had received from a lawyer and former Pentagon inspector general outlining a legal strategy to overturn the election.

“On Jan. 6, 2021, Vice President Mike Pence, as president of the Senate, should call out all the electoral votes that he believes are unconstitutional as no electoral votes at all — in accordance with guidance from founding father Alexander Hamilton and judicial precedence,” the text read.

Mr. Jordan has acknowledged speaking with Mr. Trump on Jan. 6, though he has said he cannot remember how many times they spoke that day or when the calls occurred.

The committee is particularly interested in what Mr. Trump was doing during the riot, Mr. Thompson said, noting that it had already received testimony “indicating that the president was watching television coverage of the attack from his private dining room” before his legal team resumed the effort to “delay or otherwise impede the electoral count.”

Mr. Thompson also said the committee wanted to ask Mr. Jordan about any discussions involving the possibility of presidential pardons for people involved in any aspect of Jan. 6.

Representative Liz Cheney, Republican of Wyoming and the vice chairwoman of the committee, has said that Mr. Jordan is a “material witness” to the events of Jan. 6. Mr. Jordan has said he will consider cooperating with the committee depending on its requests, though he also called the panel a “sham.”

Mr. Thompson noted that Mr. Jordan told the Rules Committee in November, “I have nothing to hide.”

Despite claiming on the House floor on Jan. 6 that “Americans instinctively know there was something wrong with this election,” Mr. Jordan has since said that he never called the election stolen.

A spokesman for Mr. Jordan did not immediately respond to a request for comment. The committee asked to schedule his interview in January and offered to travel to Ohio to conduct it.

The letter to Mr. Jordan came a day after Representative Scott Perry, a Pennsylvania Republican who is close to Mr. Jordan, refused a voluntary meeting with the committee, calling the panel “illegitimate.”

“I decline this entity’s request and will continue to fight the failures of the radical Left who desperately seek distraction from their abject failures of crushing inflation, a humiliating surrender in Afghanistan, and the horrendous crisis they created at our border,” Mr. Perry, the incoming chairman of the ultraconservative House Freedom Caucus, wrote on Twitter on Wednesday.

The panel has been reluctant to issue subpoenas for sitting members of Congress, citing the deference and respect lawmakers in the chamber are supposed to show one another. But Mr. Thompson has pledged to take that step if needed.

Committee aides said the panel preferred to gather evidence from members of Congress through a voluntary process, but it would consider stronger actions if they refused.