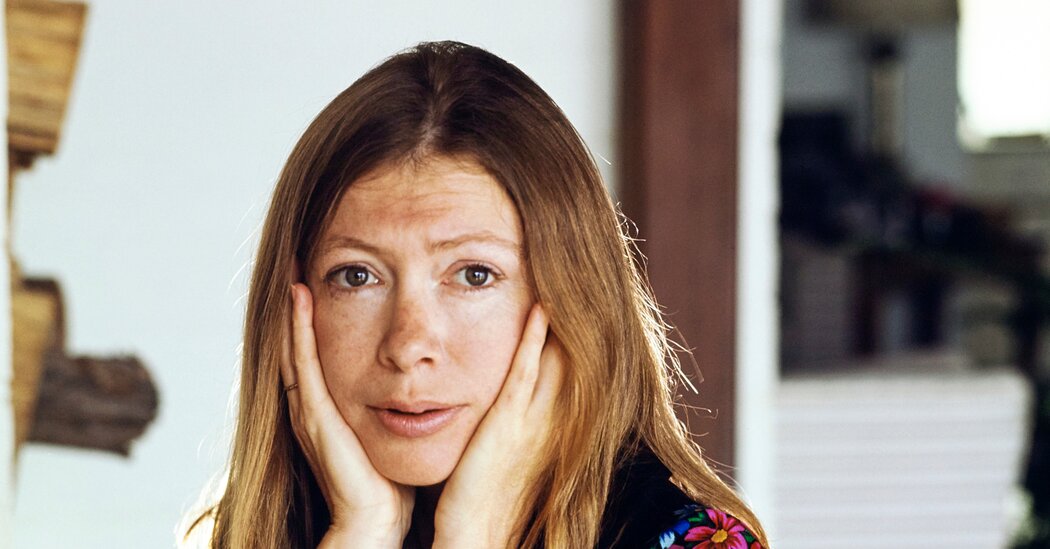 Joan Didion, whose mordant dispatches on California culture and the chaos of the 1960s established her as a leading exponent of the New Journalism, and whose novels “Play It as It Lays” and “A Book of Common Prayer” proclaimed the arrival of a tough, terse, distinctive voice in American fiction, died on Thursday at her home in Manhattan. She was 87.

The cause was complications of Parkinson’s disease, according to an email sent by Paul Bogaards, an executive at Knopf, Ms. Didion’s publisher.

Ms. Didion came to prominence with a series of incisive, searching feature articles in Life magazine and The Saturday Evening Post that explored the fraying edges of postwar American life. California, her native state, provided her with her richest material. In sharp, knowing vignettes, she captured its harshness and beauty, its role as a magnet for restless settlers, its golden promise and rapidly vanishing past, and its power as a cultural laboratory.

“We believed in fresh starts,” she wrote in “Where I Was From” (2003), a psychic portrait of the state. “We believed in good luck. We believed in the miner who scratched together one last stake and struck the Comstock Lode.”

In two early groundbreaking essay collections, “Slouching Towards Bethlehem” (1968) and “The White Album” (1979) she turned her cool, apprehensive gaze on the hippies of Haight-Ashbury, on eccentrics and searchers like Bishop James Pike and Howard Hughes, on the film industry in the post-studio era, and on the death-tinged music of the Doors.

Ms. Didion’s reporting reflected Norman Mailer’s prescription for “enormously personalized journalism in which the character of the narrator was one of the elements in the way the reader would finally assess the experience.”

Her attraction to trouble spots, disintegrating personalities and incipient chaos came naturally. In the title essay from “The White Album,” she included her own psychiatric evaluation after arriving at the outpatient clinic of St. John’s Hospital in Santa Monica complaining of vertigo and nausea.

It read, in part: “In her view she lives in a world of people moved by strange, conflicted, poorly comprehended, and, above all, devious motivations which commit them inevitably to conflict and failure.” This description, which Ms. Didion did not contest, could describe the archetypal heroine of her novels.

“Her talent was for writing about the mood of the culture,” the writer Katie Roiphe said in an interview. “She managed to channel the spirit of the 1960s and ’70s through her own highly idiosyncratic and personal — that is, seemingly personal — writing. She was perfectly matched to the times, with her slightly paranoid, slightly hysterical, high-strung sensibility. It was a perfect conjunction of the writer with the moment.”

Ms. Didion later turned to political reporting, filing long essays for The New York Review of Books on the civil war in El Salvador and Cuban émigré culture in Miami; they were published in book form as “Salvador” and “Miami.”

“She was fearless, original and a marvelous observer,” Robert B.Silvers, who was the editor of The New York Review of Books, which began publishing Ms. Didion’s work in the early 1970s, said in an interview for this obituary in 2009. “She was very skeptical of the conventional view and brilliant at finding the person or situation that was telling about the broader picture. She was a great reporter.”

Joan Didion was born on Dec. 5, 1934, in Sacramento to Frank and Eduene (Jerrett) Didion. She was a fifth-generation Californian descended from settlers who left the ill-fated Donner party in 1846 and took the safer route. Her father was a finance officer with the Army, her mother a homemaker, and during World War II the family moved from one posting to the next before returning to Sacramento after the war.

As a teenager, Ms. Didion typed out chapters from Hemingway novels to see how they worked. She was deeply influenced by Hemingway’s handling of dialogue and silence. Joseph Conrad was another formative influence.

In her junior year at the University of California, Berkeley, where she earned a bachelor’s degree in English in 1956, Ms. Didion submitted an early draft of a short story to Mademoiselle and won a spot as guest fiction editor for the magazine. The following year she won an essay contest sponsored by Vogue. Turning down a trip to Paris, the top prize, she went straight to work at the magazine, where her prose underwent a rigorous if idiosyncratic schooling as she advanced from writing promotional copy to becoming an associate features editor. “In an eight-line caption everything had to work, every word, every comma,” she later said.

By the early 1960s Ms. Didion was writing for Vogue, Mademoiselle and National Review, often on topics like “Jealousy: Is It a Curable Illness?” At the same time, she published a well-received first novel, “Run, River” (1963), about the unraveling of a Sacramento family. Although not as lean as her subsequent fiction, it introduced the preoccupations that governed her later novels — violence, dread, the sickening sense that the world was spinning out of control — and acquainted readers with “the Didion woman,” described by Michiko Kakutani in The New York Times Magazine as the forlorn resident of “a clearly personal wasteland, wandering along highways or through countries in an effort to blot out the pain of consciousness.”

In 1964, she married John Gregory Dunne, a writer at Time with whom she had been friends for several years. They moved to California and started writing screenplays. They also adopted a daughter, Quintana Roo, taking her name from the Mexican state, which they had chanced upon while looking at a map.

In time they became a bicoastal glamour couple, with one foot in Hollywood and the other in Manhattan’s literary salons. Mr. Dunne died of a heart attack at 71 in 2003. Two years later, Quintana Roo Dunne died of pancreatitis and septic shock at 39. Ms. Didion wrote about her husband’s death and her daughter’s illness in “The Year of Magical Thinking” (2005), which won the 2005 National Book Award for nonfiction and was adapted for the Broadway stage in 2007 in a one-woman production starring Vanessa Redgrave. Ms. Didion took up the subject of her daughter’s death in her 2011 memoir, “Blue Nights.”

Ms. Didion constructed a tripartite career devoted to reporting, screenwriting and fiction. Reporting, she once said, forced her into other people’s lives and allowed her to collect the information and impressions that fed her fiction. “Something about a situation will bother me, so I will write a piece to find out what it is that bothers me,” she told The Paris Review in 2006. Screenwriting, by contrast, offered a diversion, like working a crossword puzzle. She was unusually successful at all three.

In 1970, she and her husband, after optioning a story about drug addicts on the Upper West Side of Manhattan, wrote the screenplay for “Panic in Needle Park,” a film that gave Al Pacino his first starring role. Their second screenplay was an adaptation of Ms. Didion’s second novel, “Play It as It Lays” (1970), the elliptical tale of a young actress who compulsively drives the California freeways to forget her failed marriage, an abortion and her daughter’s mental illness. The film version, released in 1972, starred Tuesday Weld and Anthony Perkins.

With their third screenplay, Ms. Didion and her husband struck gold. With James Taylor and Carly Simon in mind for the lead roles, they rewrote “A Star Is Born” to bring it into the rock ’n’ roll era. With Barbra Streisand and Kris Kristofferson starring, the film became a big box-office success and paid its screenwriters handsomely.

The couple later collaborated on “True Confessions,” the film version of Mr. Dunne’s 1977 novel, starring Robert De Niro and Robert Duvall, and “Up Close and Personal” (1996), a television-news drama with Robert Redford and Michelle Pfeiffer.

In her third novel, “A Book of Common Prayer” (1977), Ms. Didion placed her heroine, the dreamy, damaged Charlotte Douglas, in a fictional Central American country torn by revolutionary politics. This broader canvas prefigured a series of long, probing articles on political subjects, often written for The New York Review of Books. A trip to El Salvador, then in the throes of a civil war, yielded the material for the highly impressionistic “Salvador” (1983), a V.S. Naipaul-esque journey into the heart of darkness.

The intricacies of Cuban-American politics were the subject of “Miami” (1987), another extended foray into personal journalism, which some critics began to find wearying. Everywhere Ms. Didion went, it seemed, she found the identical set of circumstances: looming chaos, an atmosphere saturated with dread and absurdities described by unwitting participants in clichéd language indicated by quotation marks.

“She always seems to be writing on the brink of a catastrophe so awful that her only available response is to withdraw into a kind of autism,” Adam Kirsch wrote in The New York Sun in 2006. (“I have a theatrical temperament,” Ms. Didion once told an interviewer.)

In 2015, St. Martin’s Press published “The Last Love Song: A Biography of Joan Didion,” by Tracy Daugherty. Two years later, “Joan Didion: The Center Will Not Hold,” a documentary film produced and directed by Griffin Dunne, the son of her brother-in-law, the journalist Dominick Dunne, was shown on Netflix.

She left no immediate survivors.

In her later years, Ms. Didion abandoned traditional reporting and wrote a form of cultural criticism that focused on how the press and television interpreted certain events, including presidential elections and the beating and rape of a jogger in Central Park in 1989.

Several of these essays were included in the collections “After Henry” (1992) and “Political Fictions” (2001), which focused on the administrations of George Bush and Bill Clinton. In 2006, Everyman editions published “We Tell Ourselves Stories in Order to Live: Collected Nonfiction.” In “South and West: From a Notebook,” published in 2017, Ms. Didion reached back to the 1970s and retrieved her impressions of the Deep South, where she and her husband had traveled on assignment for Life magazine, and further reflections on California.

The voice remained the same: tough, knowing, at times cynical. Despite her deceptively frail appearance, she maintained the stance of a frontierswoman shaped by the extreme circumstances of her native state. She put it succinctly in “Where I Was From”:

“You were meant, if you were a Californian, to know how to lash together a corral with bark, you were meant to show spirit, kill the rattlesnake, keep moving.”