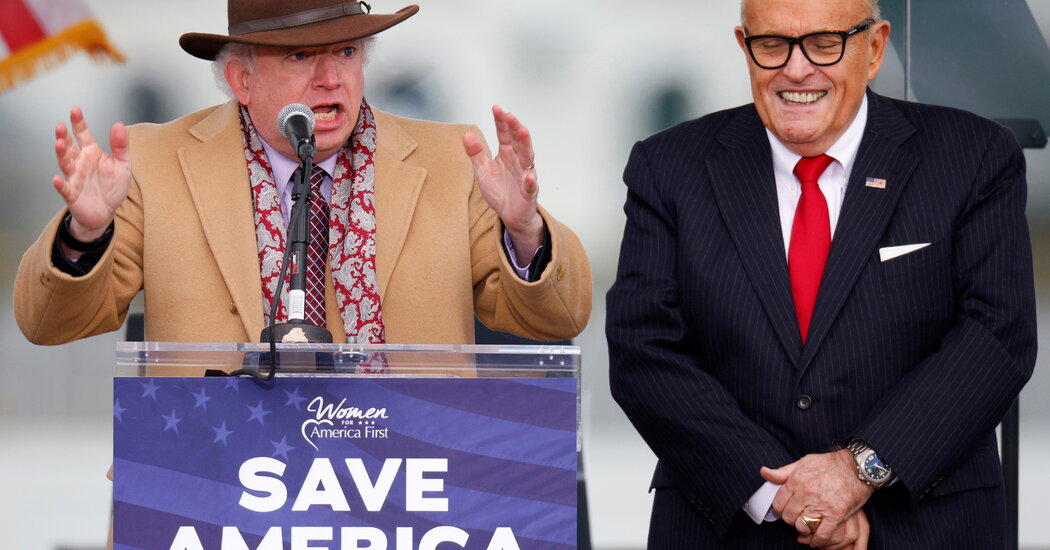 WASHINGTON — Even by the standards of other ideas promoted by the conservative lawyer John Eastman to keep President Donald J. Trump in the White House after his election loss in 2020, a newly revealed strategy he proposed to take votes from Joseph R. Biden Jr. in Pennsylvania stands out as especially brazen.

Mr. Eastman pressed a Pennsylvania state lawmaker in December 2020 to carry out a plan to strip Mr. Biden of his win in that state by applying a mathematical equation to accepting the validity of mail ballots, which were most heavily used by Democrats during the pandemic, according to emails from Mr. Eastman released under a public records request by the University of Colorado Boulder, which employed him at the time.

The emails were the latest evidence of just how far Mr. Trump and his allies were willing to go in the weeks after Election Day to keep him in power — complete with anti-democratic plans to install fake pro-Trump electors and reject the votes of Biden supporters. Mr. Eastman would go on to champion the idea that Vice President Mike Pence could unilaterally block congressional certification of Mr. Biden’s Electoral College victory, an idea Mr. Pence rejected even as Mr. Trump was promoting the protests that turned into the Jan. 6 assault on the Capitol.

He suggested that a mathematical equation could be applied to the vote tallies to reject mail-in ballots for candidates at “a prorated amount.”

Mr. Eastman said he was basing his recommendations on his belief that the Trump legal team had presented “ample evidence of sufficient anomalies and illegal votes to have turned the election from Trump to Biden” at public hearings around the country, including in Pennsylvania. But he admitted that he had not actually watched the hearings.

“Having done that math, you’d be left with a significant Trump lead that would bolster the argument for the legislature adopting a slate of Trump electors — perfectly within your authority to do anyway, but now bolstered by the untainted popular vote,” Mr. Eastman wrote. “That would help provide some cover.”

He also encouraged Mr. Diamond to have the legislature make a specific determination that “the slate of electors certified by the governor,” and chosen by the voters, was “null and void.”

In one email, Mr. Diamond responded that Mr. Trump’s lawyers had not presented strong evidence of fraud at the Pennsylvania hearing.

“Honestly, the Trump legal team was not exactly stellar at PA’s hearing, failed to provide the affidavits of their witnesses and made a glaring error by purporting that more ballots had been returned than mailed out,” he wrote.

On Dec. 13, the day before all 50 states were set to cast their votes in the Electoral College, Mr. Eastman again urged Mr. Diamond to keep up with the plot to create an alternate slate of electors in Pennsylvania.

“The electors absolutely need to meet,” Mr. Eastman wrote to the lawmaker. “Then, if the legislature gets some spine, AND (politically) proofs of fraud and/or illegal votes sufficient to have altered the results of the election is forthcoming, those electoral votes will be available to be certified by the legislature.”

In one email, Mr. Diamond introduced Mr. Eastman to the Republican House majority leader in the state, crediting Mr. Eastman with “opening my eyes to our ability to exercise our plenary authority to decertify presidential electors (without ANY ‘evidence’ of retail ‘voter fraud’).”

A lawyer for Mr. Eastman did not respond to a request for comment on Wednesday.

In a brief interview on Tuesday, Mr. Diamond said he first learned about Mr. Eastman and his theories about the power of state lawmakers to shape elections when the lawyer testified in front of the Georgia legislature in early December 2020.

Mr. Diamond added that when he started to correspond with Mr. Eastman about election results in Pennsylvania, he thought that Mr. Eastman was merely a law professor and did not realize that he was associated with the Trump campaign. Mr. Diamond said he never pursued the idea of disqualifying mail ballots containing votes for Mr. Biden, though Pennsylvania Republicans tried multiple avenues to fight the election results, including filing a lawsuit, appealing to members of Congress and conducting a forensic investigation.

The university released more than 700 of Mr. Eastman’s emails and other documents to The New York Times in response to a public information request. The documents were released earlier to the Colorado Ethics Institute, and were reported earlier by The Denver Post and Politico.

The Colorado Ethics Institute, a nonprofit that tries to hold public officials accountable to ethics and transparency rules, provided the emails on April 19 to the House committee investigating the Jan. 6 attack.

Curtis Hubbard, a spokesman for the nonprofit, called for a “thorough audit” of Mr. Eastman’s tenure at the university to “determine the school’s connection — wittingly or unwittingly — to one of the darkest days in the history of this country.”

Justice Department officials have said they are investigating some of the schemes that Mr. Eastman supported to overturn the election — chief among them, a plan to use so-called alternate slates of electors in key swing states that were won by Mr. Biden. But Mr. Diamond said he had not been contacted by anyone from the Justice Department.

The records show the university paid for Mr. Eastman’s trip the weekend after the election to an academic conference in Philadelphia, where he told The Times that his role in Mr. Trump’s efforts to remain in power began. At the time of the trip, Mr. Trump’s closest aides, including Corey Lewandowski, were at a nearby hotel putting together a legal brief to challenge the results in Pennsylvania. One of Mr. Trump’s aides reached out to Mr. Eastman to see whether he could go to the hotel to help Mr. Trump’s team.

In the beginning of December, Mr. Trump called to see whether Mr. Eastman could help bring legal action directly before the Supreme Court. In the days that followed, Mr. Eastman filed two briefs with the court on Mr. Trump’s behalf, but those efforts quickly failed.

The emails also paint a portrait of Mr. Eastman as a visiting professor in Colorado who was respected as a conservative thinker — winning praise from conservative students, including one who thanked him for “having the courage to stand up for your beliefs” and complained of being harassed by liberal professors “for being a white male” — until he fell into disrepute at the university as his efforts to overturn the election became known.

After more than 200 professors and students signed a petition against him for questioning the results of the election on Twitter, he wrote: “Oh, brother. These people are indefatigable.”

And he complained in emails that he was overworked, as he rushed to challenge the election on behalf of Mr. Trump and teach his classes over Zoom.

For a while, he retained the support of his supervisors, including one who cheered him on when Mr. Eastman told him he was doing legal work for Mr. Trump.

But after Mr. Eastman spoke at the pro-Trump rally on Jan. 6 that preceded the riot at the Capitol, baselessly claiming that Democrats had placed ballots in “a secret folder” inside voting machines in a bid to rig the results, he became a lightning rod for criticism.

That same afternoon, a former colleague at the university wrote him to say that he had engaged in “seditious actions” during his speech. Within hours Mr. Eastman fired back, calling the accusation “defamatory.”

As the days went on, Mr. Eastman defended himself against a blizzard of attacks from those who called him “a traitor” or worse.

He often disavowed the violence that erupted at the Capitol and sometimes blamed it on the leftist activists known as antifa.

In the months since, more information has emerged about Mr. Eastman’s central role in trying to overturn the election, including writing a memo laying out steps he argued Mr. Pence could take to keep Mr. Trump in power.

In March, a federal judge ruled in a civil case that Mr. Eastman and Mr. Trump had most likely committed felonies as they pushed to overturn the election, including obstructing the work of Congress and conspiring to defraud the United States.

The actions taken by Mr. Trump and Mr. Eastman, the judge found, amounted to “a coup in search of a legal theory.”