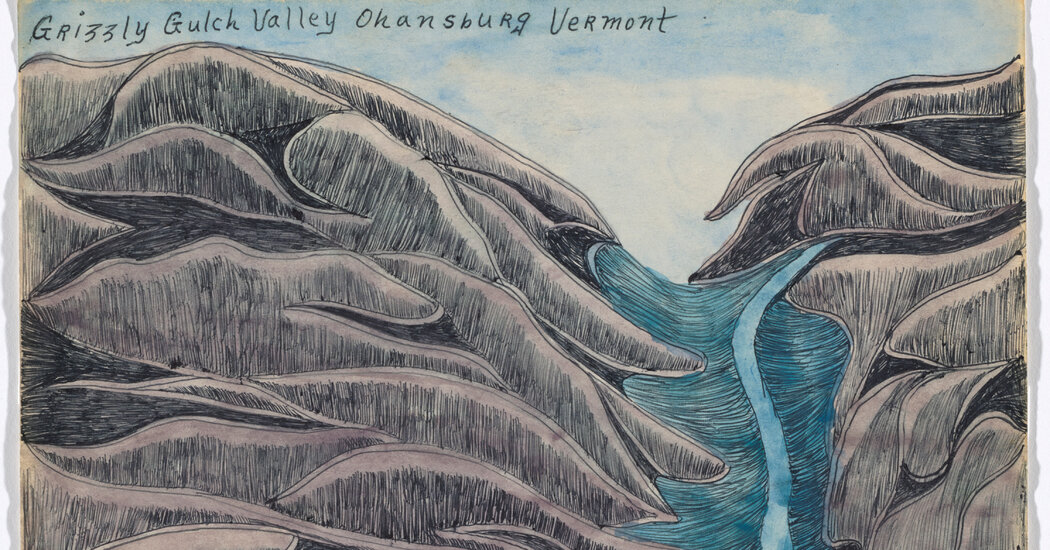 Born around 1891, the self-taught artist Joseph E. Yoakum spent most of his youth as a runaway working for traveling circuses. Before a dream inspired him to start making uncanny landscape drawings at the age of 71, he had already served in World War I, walked away from an early marriage and five children, crisscrossed the country again as a salesman, married again and been widowed, and retired to a storefront apartment in Chicago.

When he displayed the first few drawings in his apartment windows, they quickly caught the eye of a passing anthropology professor who arranged a show for him at a nearby cafe. That show was covered by the Chicago Daily News, with a headline quoting the eccentric but deeply religious artist: “My Drawings Are a Spiritual Unfoldment.” By the time he died, in 1972, at age 81, Yoakum had been exhibited at the Museum of Contemporary Art Chicago, the Museum of Modern Art in New York, and the Whitney.

I’ve seen his drawings before, and you may have, too, in group shows, at art fairs or in reproduction. Made in ballpoint pen and colored pencil, they have an otherworldly palette and unforgettable undulating lines. But “Joseph E. Yoakum: What I Saw,” a substantial new survey organized by the Art Institute of Chicago, the Museum of Modern Art, and the Menil Drawing Institute, is Yoakum’s first major museum show in 25 years. And only as I sank into its more than 100 works did I start to appreciate just how magnificently strange they are. Seen one or two at a time, they were eerie but had a winning grace about them. In quantity, they were absorbing and unsettling in equal measure. In the gallery, I was entranced — but by the time I left I felt thoroughly weird.

Yoakum’s biography can be tricky, too. It’s poorly documented, and the artist himself was not a reliable narrator; he was also an artist of color with — as Faheem Majeed, an artist who formerly directed Chicago’s South Side Community Art Center, points out in the exhibition’s handsome catalog — no evident connection to the Black artistic ferment happening all around him on the South Side of the 1960s. (Majeed is discomfited by Yoakum and says so; others tread more carefully.) Instead he was taken up and championed — or, depending who you ask, romanticized and exploited — by a group of younger, mostly white artists later known as the Chicago Imagists. Yoakum always told them that he wasn’t Black, but Navajo, which seems to have been either a delusion or a joke — he insisted on pronouncing it “Nava-Joe.” He may have had some Cherokee or Cherokee Freedman ancestry, but it isn’t certain, and at this point his childhood circus experiences can’t really be substantiated, either.

It’s hard to know exactly where to put him, and in a moment when racial and ethnic identity are on everyone’s mind — and the art world is struggling to pay overdue attention to artists of color — it’s a little disconcerting to read about a Black artist who used pop culture stereotypes of Native Americans in his drawings, and who once traced over the white model in a shampoo ad to make a portrait of Ella Fitzgerald. But it’s bracing, too, because it pushes back against the temptation, so often lurking behind efforts to diversify museums, to make any artist of color into a one-dimensional hero. It’s important to be reminded that artists like Joseph Yoakum aren’t necessarily who we want them to be.

His drawings aren’t what we expect, either. Are they, in fact, even landscapes? They do depict mountains, rivers, harbors and other natural scenery, sometimes with a severe heraldic sun sitting over the horizon. But often those mountains and rocks are described with a sinuous double line that evokes topographical maps, and if not for the cue of the horizon, you wouldn’t know if you were looking into a scene from the side or from above.

Yoakum inscribed his drawings with highly specific titles — “Great Falls Montana Falls Are in Mission River” is one example — and always insisted that they recalled vistas he’d seen while traveling with the circus, the Army, or on his own. And many of them do match up. But in one case, at least, documented in the exhibition, he seems to have copied his view from a picture postcard, and many scenes — not least the pair that include a low-tech but impossible pink U.F.O. — are completely fantastical.

Tight ballpoint hatching over lightly applied blue pencil, in “Monongahelia River Falls near Riverside West Virginia,” vividly produces the effect of rushing water. But rows of tiny, identical trees, in the same drawing, recede under inexplicable tan loops, exploding any sense of naturalism. With greenish skies and yellow or dark lavender hills, his color choices, too, seem drawn from a real planet but not necessarily this one.

Impossibly smooth mountains branch across paper like so many blood vessels, and the low, nocturnal hills of “Grizzly Gulch Valley Ohansburg Vermont,” the superlative drawing reproduced on the cover of the catalog, look more like piles of leeches than stone. A large rock formation in “Waianae Mtn Range Entrance to Pearl Harbor and Honolulu Oahu of Hawaiian Islands” is unmistakably a face, and, in a 1963 drawing, “Grand Coulee Dam in Columbia River near Olympia Washington,” the ground near Olympia pinches the mouth of the Columbia River like a finger and thumb.

But if you look at an undated drawing of Nat King Cole, there’s something cold about the curve of his jaw — it’s as polished as a statue. There’s something telling, too, about those drawings Yoakum made by tracing the Breck shampoo model. Even when he isn’t working directly from an advertisement or a photograph, Yoakum, as an artist, just doesn’t seem comfortable with the human body. He follows its contours from the outside, like a sailor charting some strange new island.

Under a moving train, Yoakum’s lines buckle as if in violent earthquakes; at the peaks of “Mt Suliwulai in Kunlun Mtn Era near Chiuchuan of East Central China East Asia,” they flicker like flames. Sometimes, noticing how Yoakum’s colors sink under their own weight, I almost thought I was looking at a sand painting tipped up on its side. In all this strange variety, the only constant is instability. But Yoakum’s colors are so vivid, his scenery so vibrant, that the unstable feeling comes across almost subliminally. Standing in front of “Grizzly Gulch Valley Ohansburg Vermont,” you can’t quite imagine yourself in Grizzly Gulch, because the drawing’s evolution across the page is so idiosyncratic that no one but Joseph Yoakum could make it continue. But you may feel the floor move.

“Joseph E. Yoakum: What I Saw”