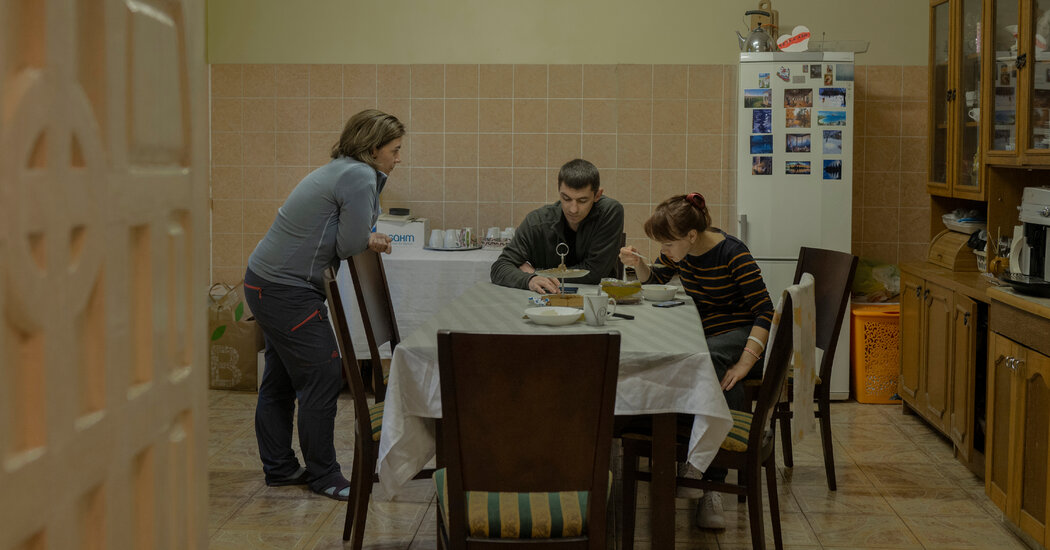 RUKLA, Lithuania — The emigrants hitchhiked overnight to the Dysna River, the border of their native Belarus. They thought they could wade across the frigid waters, but the spot they chose in haste proved to be so deep they had to swim.

On the other side, at dawn two weeks ago, they found a house with a light on and asked for the police. They were fleeing the authoritarian regime of President Aleksandr G. Lukashenko, and seeking asylum in neighboring Lithuania, a member of the European Union. Taken to a makeshift camp at a border guard station, they joined dozens of Iraqis, some Chechens and someone from Southeast Asia.

“We’ve been here for weeks, months,” a migrant told them, according to one of the Belarusians, Aleksandr Dobriyanik. “We know you’ll leave here in just a couple days.”

Two streams of migration, and two forms of human desperation, are converging in the swamps and forests of northeastern Europe. There are the Iraqis and others whom Mr. Lukashenko is channeling through Belarus into Lithuania and Poland, a migration crisis orchestrated by an autocrat eager to provoke the West. And then there are Belarusians fleeing Mr. Lukashenko, amid a wave of repression inside Belarus that has produced thousands of arrests.

Crossing from East to West, the two groups briefly share the same fate, bunking together in border camps and migrant centers. But soon their lives diverge again: Most Belarusians are quickly assured of staying in Lithuania and are allowed to move freely, while the others spend months detained in cramped containers, awaiting near-certain rejection of their asylum claims.

The differing treatment underscores the West’s staunch support for the Belarusian opposition — and illustrates the harsh moral choices being made by European countries determined to resist migration from other continents. Lithuania, a small, ethnically homogeneous nation, is on the front lines of both migrant waves, casting itself as a bulwark of the West, sheltering Belarusian dissidents while refusing entry to others.

“They blend in and society accepts them,” Evelina Gudzinskaite, the head of Lithuania’s migration department, said of Belarusians. “We are quite xenophobic,” she said, adding that she was half-joking, “but also quite rational, I think.”

Lithuania has issued more than 6,700 “humanitarian” visas for Belarusians since the uprising against Mr. Lukashenko’s fraudulent 2020 re-election sparked a crackdown in which anyone who sympathized with the opposition is a potential target. It has approved 71 asylum requests from Belarusians this year. The U.S. State Department commended the country last week for “offering safe haven to many Belarusian democracy advocates,” including Svetlana Tikhanovskaya, the opposition leader.

By contrast, of the 2,639 asylum requests Lithuania processed from non-Belarusians since the start of the influx, Ms. Gudzinskaite said, only 10 were granted. Most of the arrivals came before August, when Lithuania started blocking entry into the country at unofficial crossing points, even by people seeking asylum — a policy of “pushbacks” widely criticized by human rights groups.

Migrants have been prevented from entering the country some 7,000 times since August, according to Lithuania’s border guard service. But Belarusians are not pushed back; when they are caught entering the country illegally, they are allowed to stay and request asylum, the commander of the service, Rustamas Liubajevas, said.

“This is a totally different situation from the migrants coming in,” Gen. Liubajevas said. “In many cases, those people are just looking for a better life.”

Migrant advocates argue that the distinction between economic migrants and refugees is often false, that many people traveling through Belarus are fleeing failed states and violence, and should qualify for international protection. But even Caritas, a Roman Catholic charity supporting detained migrants, said that many may not.

“The big problem with this migrant crisis is that among these migrants there are a lot of economic ones, and they are being used for political purposes,” said Deimante Bukeikaite, the general secretary of Caritas in Lithuania.

Arriving Belarusians benefit from a large diaspora and support groups that work with the authorities on their behalf; at the beginning of the year, meanwhile, there were only 69 Iraqis living in Lithuania.

This summer, Mr. Lukashenko’s government added flights from Middle Eastern destinations and loosened visa requirements in what appeared to be a calculated effort to attract migrants who would then seek to cross into the neighboring E.U. countries, Lithuania, Poland and Latvia. Most seek to travel to countries farther west, like Germany.

Lithuania, a two-hour drive from the Belarusian capital, Minsk, has been a prime destination, though in recent weeks, Western officials have said, Belarus directed most migrants toward Poland, where their clashes with Polish police have made worldwide headlines.

Amid the crush of migration, the paths of Belarusians and other migrants intersect at holding facilities across Lithuania. At one migrant camp, a Syrian barber explained to his Belarusian tentmate that his family spent their life savings to get to Europe and now had “no way back.” Mr. Dobriyanik met men fleeing their native Chechnya region of Russia, who railed against President Vladimir V. Putin.

Lithuania, with a population of less than three million, has struggled to manage the thousands of new arrivals, and this month the government declared a state of emergency. Lithuanian leaders have called the migrants a “hybrid weapon” wielded by Mr. Lukashenko to “attack the democratic world.”

Eyad, a 25-year-old Syrian who made it from Belarus to Lithuania in July, said he does not see himself that way. “On Facebook, it is written that refugees are weapons,” he said in an interview at a migrant center in Rukla, in central Lithuania. “But this doesn’t mean that that is what I am.”

Eyad, who asked that his last name not be published to protect his parents in Syria, fled that country for Russia in 2018. Frustrated at scraping by as an undocumented immigrant in Moscow, where he said he worked at factories and shawarma stands, Eyad read on Facebook over the summer that Mr. Lukashenko had opened his country’s borders with the E.U.

He and two fellow Syrians found a driver to take them to Minsk. Eyad then studied satellite imagery to find what seemed to be a porous spot on the Belarus-Lithuania border, took a cab there from Minsk, and walked across.

Eyad is one of the handful of non-Belarusians whose asylum applications have been approved. He was moved a few weeks ago from a migrant center in a former prison to the center in Rukla, where more than 100 blue, gray and white containers house more than 700 migrants.

When Andrei Susha, a Belarusian, arrived at the Rukla center in April, it held fewer than 100 people. Mr. Susha, facing prison for derogatory online posts about the authorities, made one of this year’s more daring escapes from Belarus: After receiving a summons to the police station, he grabbed his motorized paraglider, got a ride to a field about 10 miles from the border, and took off.

He flew low over the treetops to evade detection, confirmed he was in Lithuania when the language on road signs changed, and went as far into the country as his fuel could take him. After turning himself in, he stayed at the Rukla center because he did not have the money to go elsewhere.

In the summer, the center started filling up. Mr. Susha’s room, home to just him and a roommate at first, housed seven people by August, the beds stacked on top of each other. Some of his new neighbors seemed like genuine refugees: the Uyghur from China, the Kurd from Turkey, the Sikh from Afghanistan, the Muslim from Myanmar.

“My nerves gave out,” Mr. Susha said. “The conditions were unbearable.”

In August, he managed to find a room to rent in the nearby city of Kaunas and moved out.

Mr. Susha’s asylum request was approved last week — a process that has been delayed for many Belarusians because of the crush of applicants. At the Rukla center, several Eritreans were among the small group of non-Belarusian migrants given asylum.

A 21-year-old woman said she had first fled to Ethiopia to avoid indefinite military service in Eritrea, then flew to Belarus as civil war flared in Ethiopia. The woman, who did not want her name used because she feared for her family in Eritrea, stayed in Belarus for months until she found a way to enter Lithuania.