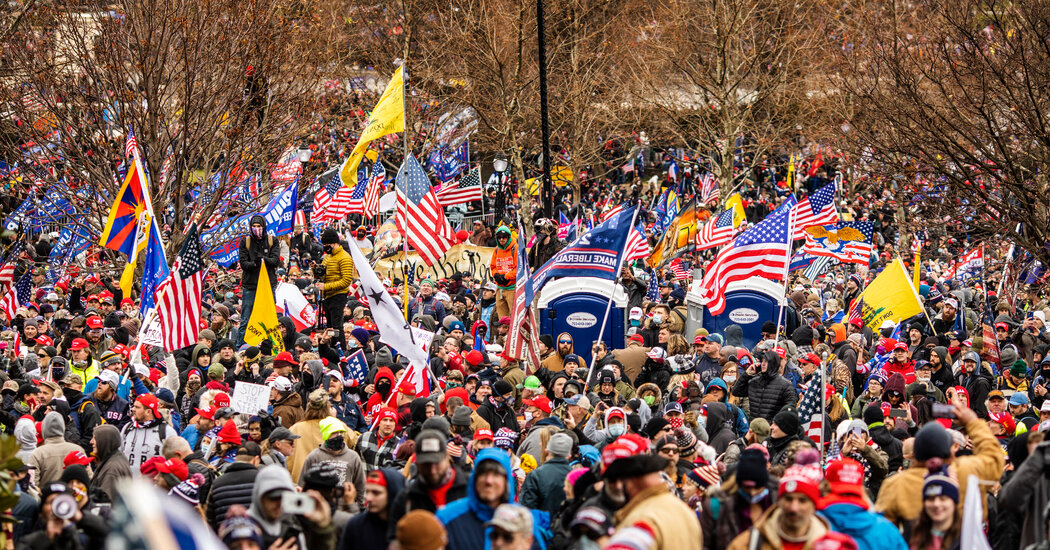 A Florida man who hurled a fire extinguisher at police officers during some of the most ferocious fighting at the U.S. Capitol on Jan. 6 was sentenced on Friday to more than five years in prison, the longest term handed down so far to any of the more than 700 people charged in the attack.

The defendant, Robert Palmer, made his way to the Capitol that day in a distinctive red-white-and-blue flag-styled jacket after listening to President Donald J. Trump address a huge crowd at the Ellipse, a park just south of the White House. Prosecutors say he milled about in the crowd outside the building as violence increasingly broke out between the police and rioters.

By a little before 5 p.m., Mr. Palmer found himself amid the most severe fighting at the lower west terrace, where an almost medieval form of hand-to-hand combat had erupted. There, prosecutors say, he threw a wooden plank-like spear at the police, sprayed a fire extinguisher at officers and then hurled the empty canister at them.

Before his sentencing hearing in Federal District Court in Washington, Mr. Palmer, 54, wrote a letter to Judge Tanya S. Chutkan, saying that he had come to recognize that Mr. Trump and his allies had lied to their supporters by “spitting out the false narrative about a stolen election and how it was ‘our duty’ to stand up to tyranny.”

“Little did I realize that they were the tyrannical ones desperate to hold on to power at any cost,” Mr. Palmer wrote, “even by creating the chaos they knew would happen with such rhetoric.”

At the hearing, Mr. Palmer became emotional describing how he had watched a television news segment about himself while in jail and was “absolutely devastated” to see the “coldness and calculation” with which he had attacked the police. He told Judge Chutkan he was “really, really ashamed” of his behavior that day and said he would never attend a political rally again.

Judge Chutkan, who has consistently taken a tough stance on Jan. 6 defendants, told Mr. Palmer that she wanted to make clear that if people sought “to violently overthrow the government” and “stop the peaceful transition of power,” they would be met with “absolutely certain punishment.”

The 63-month prison term, she went on, was “the consequence of those actions.”

Mr. Palmer is the second person who has pleaded guilty to assaulting the police to face punishment for his crimes. Last month, Scott Fairlamb, a former New Jersey gym owner, was sentenced to 41 months in prison — a term that he has since decided to appeal.

Jacob Chansley, who is better known as the QAnon Shaman, was also sentenced last month to 41 months in prison. Mr. Chansley, who is also appealing his sentence, had pleaded guilty to a single felony count of obstructing an official proceeding before Congress.