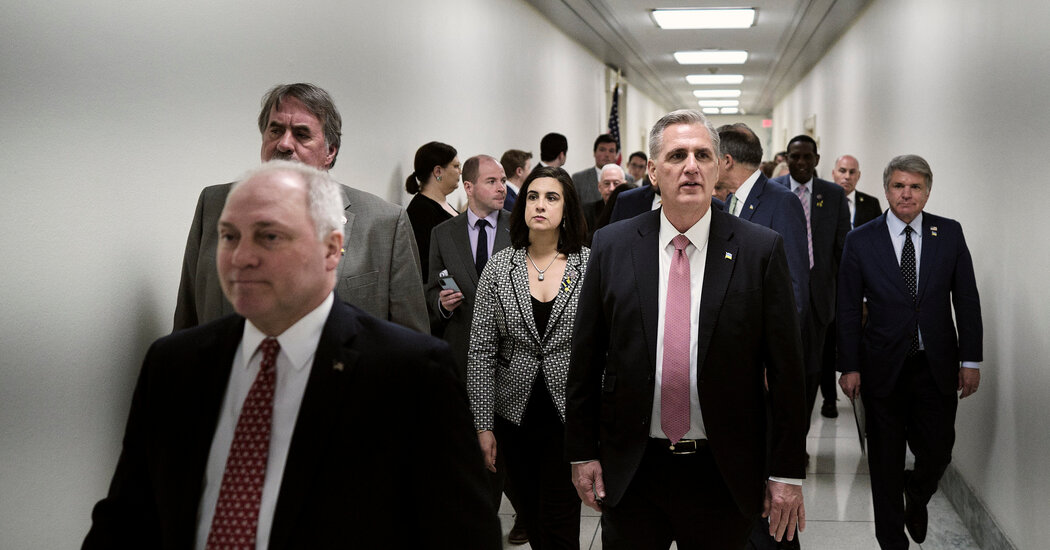 Representative Kevin McCarthy, the House Republican leader, told G.O.P. lawmakers in the days after the Jan. 6, 2021, attack on the U.S. Capitol that former President Donald J. Trump acknowledged he bore “some responsibility” for what happened that day, new audio revealed on Friday.

The audio obtained by The New York Times is part of a series of revelations about Republican leaders’ private condemnations of Mr. Trump in the days after his supporters stormed the Capitol.

Mr. McCarthy’s assertion would be the clearest indication yet that Mr. Trump may have admitted some measure of culpability for the deadly mob. The revelation comes as congressional investigators scour for evidence of Mr. Trump’s involvement in his supporters’ failed attempt to block the official certification of his loss in the 2020 election.

“Let me be very clear to all of you, and I have been very clear to the president: He bears responsibilities for his words and actions,” Mr. McCarthy told House Republicans on a Jan. 11 conference call. “No if, ands or buts.”

Mr. Trump did not respond to a request for comment, but in an interview with The Wall Street Journal on Friday he said Mr. McCarthy’s claim that he had accepted some responsibility for the attack was “false.”

The recording of the meeting was obtained in reporting for the upcoming book “This Will Not Pass: Trump, Biden and the Battle for America’s Future.” The book, which details several private conversations between Republicans talking derisively about the former president, has quickly become an embarrassment and a potential political problem for Mr. McCarthy.

Mr. McCarthy on Thursday called the report “totally false and wrong,” but the claim was swiftly disproved when The Times published a recording of the call hours later. On Friday, he repeated the falsehood, telling reporters in Ridgecrest, Calif., “I never thought that he should resign.”

The exposure of Mr. McCarthy’s dishonesty comes at a pivotal moment in the 57-year-old Republican leader’s long-plotted rise to power. The Californian is widely expected to become the next speaker of the House of Representatives if Republicans take control of the chamber after the midterm elections, an outcome seen as highly likely by strategists in both parties. But he has long faced questions about his capacity to manage the unruly, ideologically fractious flock of lawmakers who make up the House Republican conference.

Those lawmakers were looking to Mr. Trump on Friday to guide their response. Mr. Trump and Mr. McCarthy spoke on Thursday evening, a conversation first reported by The Washington Post.

In private, Mr. Trump enjoyed watching Mr. McCarthy’s misfortune, according to four people who had spoken to him about the episode and asked for anonymity to discuss private conversations. In his view, the fact that Mr. McCarthy never asked him to resign, and instead reaffirmed his devotion, only illustrated the former president’s grip on his party, they said.

The once, and perhaps future, Republican standard-bearer has often been privately dismissive of Mr. McCarthy. And it could serve Mr. Trump’s purposes if Mr. McCarthy continues as House Republican leader — but as a weakened figure even more closely dependent on Mr. Trump’s approval.

Mr. McCarthy is already a fragile figure atop the House Republican conference, embraced by the party’s various factions more out of convenience than fierce loyalty. Still, few lawmakers used the moment to criticize him on Friday.

“He has wide support from the conference,” said Representative Patrick McHenry of North Carolina, a former member of the House G.O.P. leadership.

Many lawmakers, lobbyists and aides in Washington, however, were surprised at Mr. McCarthy’s carelessness, disapproving of, if not exactly disbelieving, the notion that he would flatly deny comments he had made in group settings.

Signs of progress. The federal investigation into the Jan. 6 attack appears to be gaining momentum. The Justice Department has brought in a well-regarded new prosecutor to help run the inquiry, while a high-profile witness — the far-right broadcaster Alex Jones — is seeking an immunity deal to provide information.

Weighing changes to the Insurrection Act. Some lawmakers on the Jan. 6 House committee have begun discussions about rewriting the Insurrection Act in response to the events that led to the Capitol riot. The law currently gives presidents the authority to deploy the military to respond to a rebellion, and some fear it could be abused by a president trying to stoke one.

Debating a criminal referral. The House panel has grown divided over whether to make a criminal referral of former President Donald J. Trump to the Justice Department, even though it has concluded that it has enough evidence to do so. The debate centers on whether a referral would backfire by politically tainting the expanding federal investigation.

Continuing election doubts. More than a year after they tried and failed to use Congress’s final count of electoral votes on Jan. 6 to overturn the election, some Trump allies are pushing bogus legal theories about “decertifying” the 2020 vote and continuing to fuel a false narrative that has resonated with Mr. Trump’s supporters.

Even his allies were uneasy about how breezily Mr. McCarthy disregarded the truth.

“You either say you don’t recall the conversation or that you don’t discuss private conversations and are disappointed in those who leak them,” said Representative Tom Cole of Oklahoma, who noted he did not think Mr. McCarthy was peril.

Mr. McCarthy made the recorded remarks in the chaotic days after the attack, as he plotted a path forward with this team and sought to calm Republicans panicked about the potential political fallout.

“I know this is not fun, I know this is not great. … I don’t want to rush things, I want everybody to have all the information needed,” Mr. McCarthy said, according to an audio clip of a Jan. 10 meeting with a small group of lawmakers. “I’ve had it with this guy. What he did is unacceptable. Nobody can defend that, and nobody should defend it.”

The next day, speaking to a larger group, Mr. McCarthy seemed to be trying to reassure Republicans that Mr. Trump understood the gravity of the moment and might emerge conciliatory. It is difficult to gauge the accuracy of Mr. McCarthy’s claim about Mr. Trump.

In the 15 months since the attack, Mr. Trump has largely sought to deflect criticism when asked publicly about his role. Earlier this month, he told The Washington Post that House Speaker Nancy Pelosi and Muriel Bowser, the mayor of Washington, were to blame for failing to secure the Capitol.

In that interview, Mr. Trump disclosed that he had wanted to march to the Capitol on Jan. 6.

“Secret Service said I couldn’t go,” he said. “I would have gone there in a minute.”

This week was not the first time Mr. McCarthy had not been fully truthful about his private remarks.

Earlier this year, he was asked in a news conference about the call with House Republicans after the attack. He sidestepped the question: “I’m not sure what call you’re talking about.”