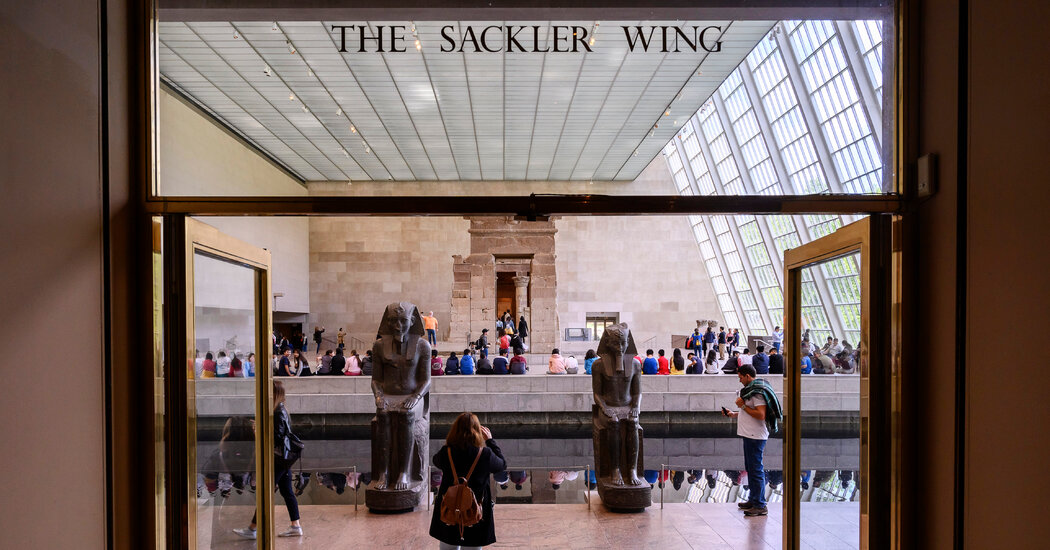 In the wake of growing outrage over the role the Sacklers may have played in the opioid crisis, the Metropolitan Museum of Art and the Sackler family jointly announced on Thursday that the Sackler name would be removed from seven exhibition spaces, including the wing that houses the Temple of Dendur.

“Our families have always strongly supported the Met, and we believe this to be in the best interest of the museum and the important mission that it serves,” the descendants of Dr. Mortimer Sackler and Dr. Raymond Sackler said in a statement. “The earliest of these gifts were made almost 50 years ago, and now we are passing the torch to others who might wish to step forward to support the museum.”

The announcement marks a significant break between the world’s largest museum and one of the world’s biggest benefactors, a potent symbol of the upheaval underway at cultural institutions over where their donations come from.

“We are seeing museums transition from gatekeepers of the elite to arbiters of social change,” said Dr. Rebekah Beaulieu, an editor of “The State of Museums: Voices from the Field,” a book published in 2018. “There is an increasing expectation that museums are institutions held in the public trust, and therefore accountable to the general public.”

Other museums have refused Sackler money, such as the Serpentine Gallery in London, and some were quicker to remove the Sackler name, including the Louvre in Paris. But since the Met is a leader in the field, its announcement is likely to make more institutions reconsider their own Sackler galleries.

“The Met is a bellwether,” said Patrick Radden Keefe, whose book about the Sacklers and the opioid crisis, “Empire of Pain,” was published this year. “It is in some ways the institution that is most linked with the Sacklers in the public mind because the Sackler Wing is so iconic and because it was one of the early recipients of their very significant philanthropy. Institutions have been kind of watching the Met.”

The museum had already severed ties to the family’s funding, announcing in 2019 that it would no longer accept gifts from the Sacklers, given their links to the maker of OxyContin.

While the Met would not explain this, both galleries are associated with the family of Arthur Sackler, who died in 1987 before OxyContin’s creation. His side of the family, which has supported institutions like the Smithsonian and the Brooklyn Museum, sold his stake in the pharmaceutical business after his death.

“The Met has been built by the philanthropy of generations of donors — and the Sacklers have been among our most generous supporters,” said Dan Weiss, the Met’s president and chief executive officer. “This gracious gesture by the Sacklers aids the museum in continuing to serve this and future generations. We greatly appreciate it.”

In the immediate aftermath of the Met’s announcement, several other museums with Sackler-named spaces said they currently had no similar plans, including the National Gallery in London — where the Sackler Room contains some of the museum’s most prized works — and the Victoria & Albert Museum, whose entrance is named the Sackler Courtyard.

As the founders of Purdue Pharma, which produced the opioid painkiller OxyContin, the Sackler family has come under increased scrutiny in recent years for the company’s role in the marketing of the drug, and in the opioid crisis.

Though its total cultural contributions over the years have not been quantified, the Sackler family has been named among the richest in the country by Forbes, which in 2020 put its net worth at $10.8 billion. And Keefe has written that the art scholar Thomas Lawton once likened Arthur, the eldest Sackler brother, to “a modern Medici.”

The Sackler family contributions to the Met date back decades. At the 1978 dedication of the Sackler Wing — hosted by the Met and three Sackler brothers — the Martha Graham Dance Company performed a new work at the Temple of Dendur, which was a gift from Egypt to the United States.

Nan Goldin, a photographer who overcame an OxyContin addiction, has led demonstrations at institutions that receive Sackler money; in March 2018, she and her supporters dumped empty pill bottles into the Sackler Wing’s reflecting pool.

Goldin, who in 2017 founded the anti-Sackler advocacy group PAIN with a group of artists, activists, and people living with addiction, on Thursday said she was “gratified” by the Met announcement. “This doesn’t actually help the overdose crisis, but at least it holds the source accountable,” she said in a telephone interview. “This is part of the change that needs to be coming.”

Other New York cultural beneficiaries of the Sacklers have included the Guggenheim, the American Museum of Natural History, the Metropolitan Opera and the Dia Art Foundation.

In recent years, there has been a growing chorus of protest around the business ties of trustees and donors. In 2019, a vice chairman of the Whitney Museum of American Art, Warren B. Kanders, resigned from the board after months of protests over his company’s sale of tear gas.

Thursday’s announcement was noteworthy for having been issued by Sackler family members as well as the Met.

Similarly, when the American Museum of Natural History announced last year that its equestrian memorial to Theodore Roosevelt — which had long prompted objections as a symbol of colonialism and racism — was coming down, a Roosevelt family member released a statement approving the removal. The statue is heading to a presidential library in North Dakota as a long-term loan from New York City.