NASA-Russia Alliance Is Shaken by Events on Planet Earth 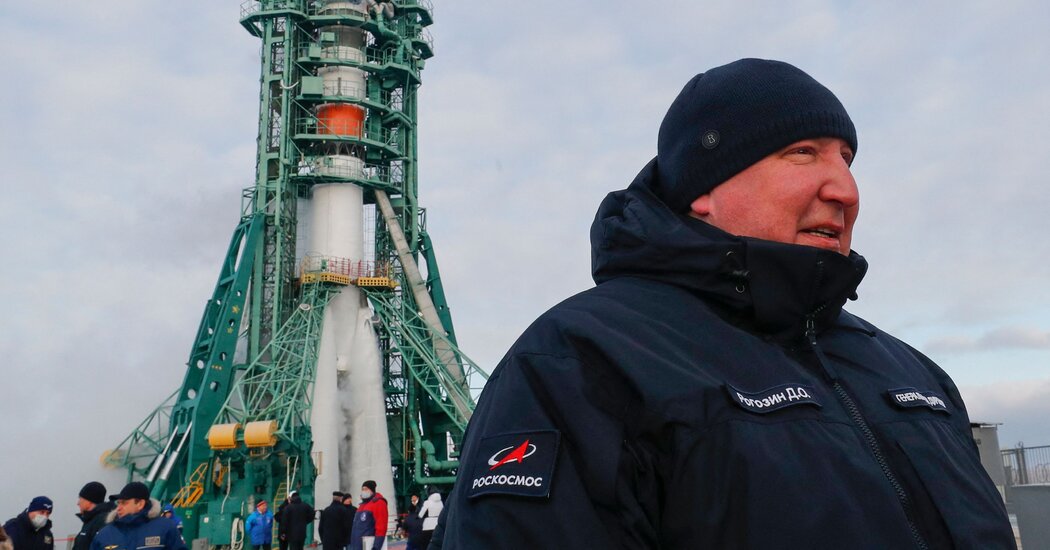 When Russia’s military blasted an old satellite to smithereens last month with an antisatellite missile, American officials reacted angrily, warning that thousands of tiny pieces of new orbital debris could endanger astronauts on the International Space Station. Dmitry Rogozin, the head of Roscosmos, Russia’s space agency, seemed to share some of that frustration.

“No, I don’t like it,” Mr. Rogozin, who initially downplayed the threat of the debris, said in a recent interview. He noted his concern “that there is a lot of debris scattered across the orbit.”

While the danger to the space station’s astronauts has waned, the diplomatic impact of Russia’s military action in orbit looms large. The Nov. 15 weapon test prompted a rare intersection of two components of bilateral ties between the U.S. and Russia: on the one hand, the bravado and provocations that define their testy military relationship; on the other, longstanding amity between NASA and the Russian space agency.

For two decades, the space station has been a symbol of diplomatic triumph between the U.S. and Russia, typically insulated from tensions on Earth. Russian astronauts traveled to orbit on the space shuttle, and when it stopped flying, the Russian Soyuz spacecraft became NASA’s only ride to orbit for nearly a decade. The station also requires the two space powers’ cooperation to function: The Russian segment depends on electricity generated by American solar panels, while the station as a whole depends on Russian equipment to control its orbit.

But now, the antisatellite test, as well as mounting tensions between the U.S. and Russia over Ukraine and other matters, are complicating the decades-old friendship between NASA and Roscosmos. As the two agencies try to secure a pair of agreements that would sustain their relationship for years to come, they are finding that affairs in orbit cannot avoid being linked to conflict on the ground.

The agreements have been in the works for years. One would allow Russian astronauts to fly on SpaceX’s Crew Dragon capsule for trips to the space station, in exchange for seats on Russia’s Soyuz spacecraft for American astronauts. The other would cement the NASA-Roscosmos space station alliance through 2030.

Both agreements require sign-off from officials in the White House whose chief concern is defusing military conflict with Russia over Ukraine. They must also go through the U.S. State Department, where officials are mulling options to deter Russia from launching antisatellite weapons in the future. Agreements to further space cooperation are becoming entangled with reactions to these other matters.

“I hope this project will not be politicized,” Mr. Rogozin said of the agreements, “but you can never be sure.”

Mr. Rogozin seemed to acknowledge that the future of the space relationship is in the hands of the nations’ leaders.

“In the sense of getting this program approved,” he said, “Roscosmos has full trust in the Russian president and the Russian government.”

Mr. Rogozin, a former deputy prime minister who oversaw Russia’s arms industry, has direct experience with the fractious side of the U.S.-Russia relationship. The U.S. sanctioned him personally in 2014 after Russia annexed Crimea. That has precluded him from entering the United States and complicated his ability to meet with his American counterparts.

Bill Nelson, the former senator from Florida serving as NASA administrator under President Biden, called Russia’s missile test “pitiful” at the time. But he softened his tone during later talks with Mr. Rogozin, voicing concerns about the new cloud of space debris but assuming his counterpart did not know in advance that Russia’s military would launch the antisatellite test.

Mr. Nelson said in an interview that he thinks Mr. Rogozin “is between a rock and a hard place, because there’s only so much that he can say” about the weapon test. “He’s had to be quite demure, which I understand completely,” Mr. Nelson added.

The day before the missile test, a delegation of senior NASA officials, including the agency’s associate administrator, Bob Cabana, flew to Moscow for face-to-face negotiations with their Russian counterparts. Through days of meetings after the test, and over dinner with Mr. Rogozin, they affirmed their desire to lock in the agreement to barter astronaut flights and extend the space station partnership beyond 2024 through 2030.

“We have an intent to do both of those. We didn’t sign any agreements, but it was a very productive discussion,” said Mr. Cabana, who was dispatched to Moscow for the talks in part because he is well known to Russian space officials as a former NASA astronaut.

Mr. Rogozin gave NASA no hint that the test was coming. He said during the recent interview that the Ministry of Defense did not consult Roscosmos beforehand, which he chalked up to the Russian military having its own space-tracking capabilities to determine whether the missile strike would endanger the space station.

But he added: “I’m not going to tell you everything I know.”

With tensions over the weapon test looming, Mr. Rogozin announced earlier this month that Anna Kikina, the only woman in Russia’s astronaut corps, would be the first Russian under the agreement to fly in SpaceX’s Crew Dragon capsule next fall. He said in the interview that under the coming agreement, he expects to fly “at least one integrated crew a year” from 2022 through 2024. Ms. Kikina and other Russian astronauts have already visited sites in the U.S. for training while the negotiations continue.

Ultimately, though, Mr. Rogozin said Roscosmos could not agree to an extension of Russia’s presence on the space station unless the U.S. removes sanctions on two Russian companies added to a U.S. blacklist last year because of their suspected military ties. The sanctions, he says, prevent Russia from building parts needed to allow the space station to survive through 2030.

“There really is no politics behind what I’m saying,” said Mr. Rogozin. “In order to give us a technical capability to produce whatever is needed for this extension, these restrictions need to be lifted first.”

Mr. Nelson of NASA says he has talked to the White House about the agreements to swap astronaut seats with the Russians and extend the space station. With the antisatellite test and other geopolitical tensions in the foreground, he indicated little progress had been made in getting the deals approved.

“All of this is to be determined,” he said.

The agreement to swap astronauts also must be reviewed by the State Department, which is weighing options for a broader response to Russia’s weapon test.

A State Department spokesman declined to discuss the potential measures, saying “we do not preview our response options.” But he pointed to remarks this month from Kathleen Hicks, the deputy defense secretary: “We would like to see all nations agree to refrain from antisatellite weapons testing that creates debris.”

Two U.S. officials, who spoke on the condition of anonymity to discuss tentative plans, said that could mean calling for an international moratorium on testing destructive antisatellite weapons, perhaps during the Conference on Disarmament in Geneva next year, rather than inserting antisatellite weapon-related language into NASA’s agreements with Russia.

Mr. Rogozin said he did not think Russia would conduct another antisatellite test.

“Whether there will be other tests of a similar kind? More likely no rather than yes,” he said.

But even if the antisatellite weapon irritant fades, NASA and Roscosmos’s alliance has been gradually scaled back, with the relationship now focused primarily on the space station.

In the 1990s and 2000s, the U.S. saw the space station as a crucial place “to reach out to Russia to build new relationships with them post-Cold War, and to keep their aerospace industry gainfully employed doing good things, and not making bad things” for countries like Iran and North Korea, said Brian Weeden, an analyst at the Secure World Foundation, a think tank.

Those conditions have changed.

NASA stopped paying up to $90 million per astronaut seat on Russia’s Soyuz capsule when SpaceX’s Crew Dragon started flying Americans to space in 2020, severing a key source of revenue for the Russian agency. Acting on orders from Congress to wean the U.S. space sector off Russia’s space industry, an American rocket company this year stopped buying Russian-made rocket engines, eliminating another source of income. And Russia is not among the cadre of U.S. allies working with NASA to send astronauts back to the moon in the next decade. It has partnered instead with China on its moon program.

Although cooperation on the space station could be extended, it would likely codify the final chapter in the civil U.S.-Russia space relationship, Mr. Weeden said. NASA is aiming to stimulate a market for privately built orbital research outposts that would eventually replace the space station, a move that could pluck one of the last strings binding the two partners together.

“The I.S.S. relationship,” Mr. Weeden said, “came out of a unique set of circumstances that I think have passed.”