New Books to Read in July 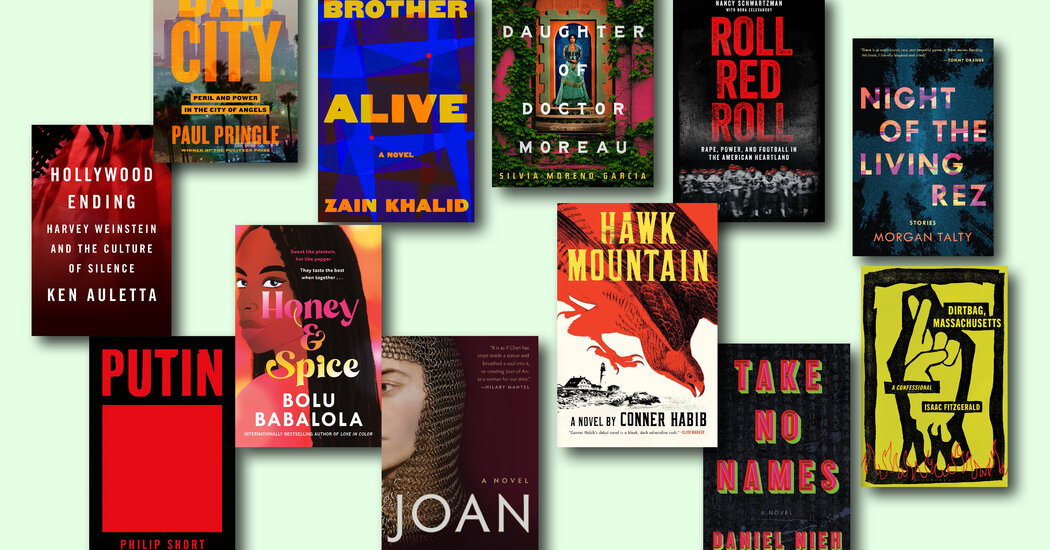 In 2016, Pringle, an investigative journalist for The Los Angeles Times, received what turned out to be a career-changing tip: The dean of University of Southern California’s medical school was linked to a drug overdose. As he continued reporting, Pringle, a Pulitzer-winning journalist, realized that the scandal was only the beginning and would result in a bombshell investigation.

In a story that leaps from the U.S. to Saudi Arabia, three adopted brothers raised by an imam on Staten Island grapple with faith, fate and a legacy of secrets. One of the boys, Youssef, has a shapeshifting double named Brother who is “more than incorporeal but less than living” and follows along as each member of the family determines his place in the world.

A riff on H.G. Wells’s “The Island of Doctor Moreau,” this book takes place in 1800s Mexico and follows the only daughter of an eccentric researcher who attempts to create animal hybrids: pigs that walk upright, dogs that can speak. She, too, is subject to his experiments — her father injects her with essences of jaguar — but that’s only the beginning of the horror.

You may recognize Fitzgerald from his book recommendation segments on the Today Show or his role as a founding editor of Buzzfeed Books, but those are only two in a long history: He’s been everything from an altar boy to a bartender. In this memoir-in-essays, he grapples with his past and describes his journey to becoming a better man.

In this psychological thriller, Todd is newly separated from his wife, about to begin a new job as a teacher and cautiously raising his young son alone when a chance encounter with an old high school bully upends his life.

How was Weinstein able to amass so much power, and what allowed him to escape consequences for so long? Auletta, who has covered Hollywood and the media for decades, places Weinstein’s crimes in a broader context.

Kiki has a following at her university for her radio show, “Brown Sugar,” which helps fellow students avoid romantic pitfalls. But once she’s spotted around campus with a man she warned her listeners to avoid, she has to work overtime to salvage her reputation.

There’s no shortage of fiction inspired by Joan of Arc, but in Chen’s telling, the saint found the fuel to fight the English in her traumatic childhood. “What choices does a woman have for vengeance, for justice?” Joan says. “When I spoke to God that morning, I decided, if I am to scream, let it be in battle.”

This debut collection of interconnected stories unfolds in a Native community in Maine, where Talty grew up as a member of the Penobscot Indian Nation.

A biography years in the making offers a thorough look at the Russian president’s life, career and concentration of power. Short, who has also written biographies of Mao and Pol Pot, draws on hundreds of interviews for this portrait, charting Putin’s transformation into a ruthless autocrat.

In Steubenville, Ohio, in 2012, a 16-year-old was sexually assaulted by members of the local football team, who spread footage and photos of the incidents on social media. Two of the players were found guilty of rape, and the case ushered in a reckoning about how the internet can exacerbate real harm — but be a tool for justice, too. Schwartzman, who spent years in the town for a documentary, brings together new reporting, impressions of the consequences and a broader look at masculinity and accountability.

Readers first met Victor Li in “Beijing Payback” as he avenged his father’s death in China. Now, trying to start over, he finds anonymous, if immoral, work: robbing storage units that belong to people who have been deported and setting in motion an international scheme more twisty than you could imagine.