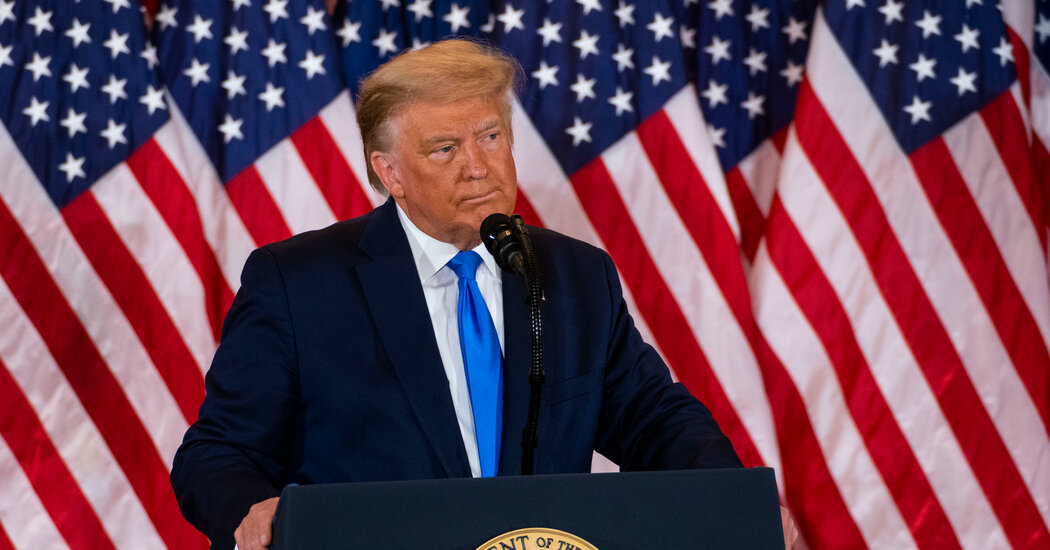 The New York State attorney general, Letitia James, is seeking to question former President Donald J. Trump under oath in a civil fraud investigation, according to two people with knowledge of the matter, an unusual move that comes at a critical juncture in a parallel criminal investigation into the former president.

Ms. James, whose office is also participating in the criminal investigation being run by the Manhattan district attorney, Cyrus R. Vance Jr., wants to question Mr. Trump on Jan. 7 as part of her separate civil inquiry into his business practices.

If Ms. James finds evidence of wrongdoing in the civil inquiry, she could file a lawsuit against Mr. Trump, but she could not file criminal charges.

Her request comes as Mr. Vance is pushing to determine whether Mr. Trump or his family business, the Trump Organization, engaged in criminal fraud by intentionally submitting false property values to potential lenders. Mr. Vance, a Democrat, did not seek re-election and is leaving office at the end of the year. He will be succeeded by Alvin Bragg, a former federal prosecutor elected in November.

And because the two investigations overlap — both Ms. James and Mr. Vance have been focused on whether Mr. Trump inflated his property values to secure financing, and their offices are working together on the criminal inquiry — Mr. Trump could refuse to sit for a deposition once Ms. James formally subpoenas him. Ronald P. Fischetti, a lawyer for Mr. Trump, said in a brief interview on Thursday that he would ask a judge to quash the subpoena.

Mr. Trump’s lawyers are likely to argue that the former president’s testimony could be unfairly used against him in the criminal investigation, violating the constitutional right against self-incrimination. If a judge sided with Ms. James, Mr. Trump could invoke his Fifth Amendment right and decline to respond to questions.

Still, while that decision could not be used against Mr. Trump in the criminal investigation, it might harm him in Ms. James’s civil inquiry. Jurors are barred from inferring anything from a defendant’s refusal to testify in a criminal case, but the same is not true in a civil inquiry, where Mr. Trump’s silence could be used against him.

News of the move came just hours before Ms. James, a Democrat who had announced a run for governor in New York, said that she would instead seek re-election as state attorney general.

“I have come to the conclusion that I must continue my work as attorney general,” she said in a statement. “There are a number of important investigations and cases that are underway, and I intend to finish the job.”

Mr. Trump has repeatedly referred to both the criminal and the civil investigations as politically motivated witch hunts and has denied all wrongdoing.

Mr. Fischetti said that the news of Ms. James’s request had not come as a surprise.

“This is what the A.G. has been doing, working hand in glove with the D.A.’s office,” he said, implying that Ms. James’s decision was political and noting that she intended to seek re-election.

Danny Frost, a spokesman for Mr. Vance, said that Ms. James’s request was “not part of the criminal investigation.” He declined to elaborate and would not say whether Ms. James’s office had notified Mr. Vance’s prosecutors about the request to question Mr. Trump.

A spokesman for Ms. James, whose attempt to question the former president was first reported by The Washington Post, declined to comment.

Bruce Green, who directs a center for legal ethics at Fordham University, said in an interview that it was typical for civil investigations to defer to criminal inquiries. Ms. James’s actions, he said, might suggest she wants to put her investigation on a firm footing in case the criminal inquiry does not result in charges.

“You don’t want to forgo doing the civil investigation on the theory that the prosecutors are going to indict, and then they don’t,” Mr. Green said.

Numerous inquiries Since former President Donald Trump left office, there have been many investigations and inquiries into his businesses and personal affairs. Here’s a list of those ongoing:

The criminal investigation, which is focused on Mr. Trump’s statements about the value of his assets, has proceeded in fits and starts for more than three years and is reaching a crucial phase toward the end of Mr. Vance’s tenure.

Over the last several months, the investigators have issued subpoenas for records about Mr. Trump’s properties, and interviewed a banker employed by the former president’s top lender, Deutsche Bank.

Ms. James’s civil investigation into Mr. Trump, which has been underway since March 2019, is focused on some of the same strands as the criminal investigation being overseen by Mr. Vance, and has included scrutiny of similar properties, including Mr. Trump’s Seven Springs Estate in Westchester County.

Last winter, Ms. James was able to obtain a number of documents relating to the inquiry after a judge twice rejected Mr. Trump’s attempts to block their release. Some of the documents were relevant to a conservation easement at the Seven Springs property.

Ms. James was examining then whether the easement — a legal agreement meant to protect a land’s conservation value — was legitimate and whether the Trump Organization had improperly valued the estate, allowing it a $21 million tax deduction to which it should not have been entitled.

Over the course of the investigation, Ms. James’s prosecutors have also scrutinized some of Mr. Trump’s other financial transactions, including the restructuring of the Trump International Hotel & Tower in Chicago in 2010.

If Mr. Trump is deposed next year, it would be the second time he has been questioned under oath since leaving office. In October, he was questioned for hours in connection with a lawsuit filed by a group of demonstrators who said Mr. Trump’s bodyguards had attacked them outside Trump Tower in 2015.

That deposition has not yet been released, and it is not clear when it might become public.