Oilers and Flames in Battle of Alberta: Bedlam on the Ice, Torn Loyalties Off It 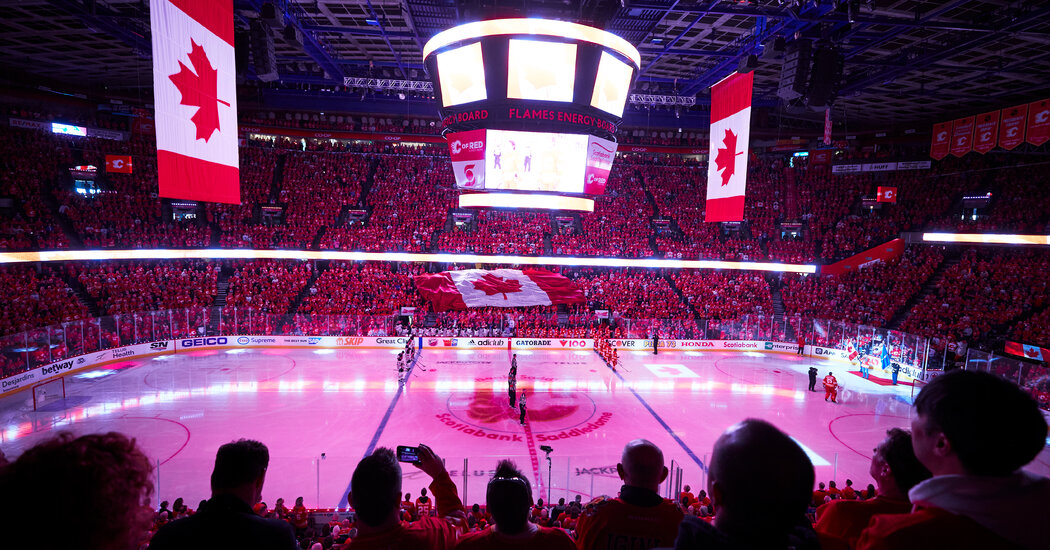 ON THE ROAD BETWEEN CALGARY AND EDMONTON, Alberta — A white sedan trundled down a quiet road in Gasoline Alley, a tiny hamlet alongside Highway 2, with two flags flapping in a Saturday breeze. One fluttered for the Edmonton Oilers hockey club and the other for the Calgary Flames, two of the fiercest rivals in sports, waving from the windows of the same car.

Red Deer is the geographical midpoint between Alberta’s two major cities — Edmonton to the north and Calgary due south — and loyalties can be split “about 52-48 for the Oilers,” as calculated by a server at a local Tim Hortons doughnut shop. For some families — and their cars — it can be more like 50-50.

Carl Dies, a structural engineer who grew up in northern Alberta cheering passionately for the Oilers, was not surprised to hear about the car with divided loyalties as he took a break at a Gasoline Alley indoor climbing facility.

Now they are both good, and those colors are running white hot again. For the first time in 31 years, the Battle of Alberta is re-engaged in the Stanley Cup playoffs, and the provincial adversaries are rumbling in a second-round encounter, boiling over with the heavy hits, trash talk, deafening arenas, bragging rights and bountiful goal scoring that defined hockey in the 1980s, when the Flames and Oilers played four postseason series.

“The intensity is as high as it gets,” said Lanny McDonald, the Hall of Fame winger, who grew up on a farm in Hanna, Alberta, east of Calgary, and played eight seasons with the Flames. “It’s bragging rights in sports, politics, culture, north vs. south, which side is better. We always think the South is better.”

The two cities quarrel over which has the better team, the juicier steak, the hipper restaurant row — even the superior library. At the moment, the meter tilts slightly toward Edmonton after the Oilers comfortably won Game 3 on Sunday, to take a 2-1 series lead.

After the game, Oilers fans poured onto the streets of Edmonton chanting, “We want the Cup,” while some climbed atop a statue of Wayne Gretzky, waving flags while car horns honked for over an hour afterward. Only the third game of the second round and it was hopping. This is the Battle of Alberta.

For decades, before the Flames and the Oilers even existed, the Alberta sports competitions were played out by club and lower-level professional hockey teams, in the local rodeos and through the Canadian Football League.

But this is the Stanley Cup playoffs and this is Canada, where five-dollar bills depict children playing pond hockey, and where the Battle of Alberta stamped the ’80s with thrilling games and rollicking punch-ups.

“On the ice, there was a lot of blood, sweat and tears in that rivalry,” said Wayne Gretzky, the Hall of Fame forward and a member of the dominant Oilers from 1979 to 1988. “There was just an incredible desire to win on both sides.”

Gretzky led the Oilers to four Stanley Cups in the 1980s — and almost as satisfying, won three playoff series against the Flames, starting in 1983. Originally a member of the World Hockey Association, the Edmonton Oilers joined the N.H.L. in 1979.

They also went by the name Alberta Oilers for one season in 1972-73, but that was before the N.H.L. came to Calgary. When the Flames moved there from Atlanta in 1980, it was on.

The rivalry was fierce enough in the regular season, but once the teams met in the playoffs games grew furious, captivating and sometimes vicious. Even a superstar like Gretzky had to be extra aware of what elbows and hips might be thrown his way.

“That’s a big part of it, and you knew it was coming,” Gretzky said in a telephone interview. “It’s a battle and it’s a war, but there is tremendous respect on both sides.”

Gretzky scored an incredible 19 goals and assisted 27 others in 23 playoff games against the Flames. McDonald scored 10 with 13 assists. The teams faced one another four times in the playoffs between 1983 and 1988, and again in 1991, with Calgary’s only win coming in 1986. In eight consecutive seasons through 1990, one of the two teams went to the Stanley Cup finals, with Calgary finally winning in 1989.

Both teams were so good that winning the Stanley Cup in that era required a trip to Alberta — and it was not for the timid. McDonald said that in those days, if you were playing some random team and saw one of their players in the corridors of the arena, you would smile, say hello and perhaps chat.

“But when we passed the Oilers in the hallway, we wouldn’t even look at the guy,” he said. “Nope, not doing that. We’ll make eye contact on the ice.”

McDonald, who spoke via telephone from Tampere, Finland, where he was watching the men’s world championships, recalled two particular five-on-five brawls. In one, he found himself paired against Keith Acton, the 5-foot-8, 170-pound Edmonton center. In the other, he tangled with the bruising Marty McSorley.

“I liked the one with Acton a lot better,” McDonald said with a laugh. “But you accepted the challenge, and you couldn’t wait for the games.”

Fighting in hockey, while extant, is an echo of what it was in the 1980s. In recent years, as the rivalry erupted again, several frightening bouts erupted between the teams in the regular season, most notably between Matthew Tkachuk of the Flames and Edmonton’s Zack Kassian, and an old-fashioned goalie fight between Cam Talbot and Mike Smith, in 2020.

So, it was no surprise that once the puck dropped in Game 1, the checking, elbowing and chirping spiked accordingly. In Game 1, Tkachuk taunted Edmonton’s Evander Kane over a personal bankruptcy case Kane filed, by rubbing his gloved fingers together after a skirmish and asking Kane if he needed money. Kane responded with a hat trick in Game 3.

The penalty boxes have been overcrowded at times and Milan Lucic, Calgary’s meaty winger, set the tone in Game 1 by leveling Connor McDavid, Edmonton’s transcendent star. In Game 3, Lucic received 15 penalty minutes, including a game misconduct, for ramming Smith into the boards. This, too, is the battle of Alberta.

With each hit, each shot and every extra effort made to push the puck out of the defensive ends, both arenas pulsated under the din, but Edmonton’s seemed more thunderous.

“That building was quite, quite loud tonight,” Oilers Coach Jay Woodcroft said after Game 3. Game 4 on Tuesday is expected to bring more of the same.

The shimmering Rogers Place, home of the most northern major sports team in the Americas, lies 186 miles north of the outdated Saddledome in Calgary, with Red Deer about 90 miles from each. But from every corner of Alberta, a stunning province of glacial lakes and the Rocky Mountains known for oil production, rolling prairies and cattle ranches, loyalties are torn, sometimes even within families.

For Game 1, Riaz Hamir wore a crisp, blue-and-orange Oilers jersey to the Saddledome, as did his 12-year-old daughter, Laila. But his wife, Shafali, and their 15-year-old son, Junyard, both wore Calgary red. A house divided.

“There is lots of good trash-talking at breakfast,” said Shafali Hamir, who danced and pointed at her husband in their seats behind the glass when Calgary scored a key goal in its wild 9-6 Game 1 victory.

Before both games in Calgary, thousands of fans in Flames jerseys marched along the so-called Red Mile of 17th Ave., turning the boulevard into its usual game-day sea of red. But with the Oilers in town, a good number of blue jerseys stood out, and many groups included fans of both teams, chatting amiably on their way to the Saddledome.

Eric Eyolfson, who earned his doctorate in neuroscience on the afternoon of Game 1, went with his good friend, Grayson Magnus, a real estate agent and Oilers fan. They sat in a corner of the Saddledome, in different jerseys, and needled one another, but without rancor.

“Well, it’s Canada,” Gretzky said, “so, everyone is nice. But it divides homes and families. It’s different from Islanders-Rangers, or Montreal-Toronto. It has its own flavor.”

McDonald, who recalled the atmosphere in the 1980s as a lot more menacing than it is now, was at the Saddledome for Game 1. He is itching to get back to Calgary for Game 5, but he could not believe that after all those years grappling with Gretzky, his Flames must now contend with another superlative Oilers superstar in McDavid, who looks possessed with the magical touch of a Gretzky or Mario Lemieux.

McDavid has nine points in the first three games (two goals and seven assists) for a total of 23 points in the playoffs so far, as he carves abstract patterns across the ice while Calgary defenders flail trying to catch him. He has been invigorated in his first foray into the historic provincial fray.

The current Flames are struggling to find a way to stop McDavid and his teammates, just as the old Flames did with Gretzky and his. And to capture all the spirited moments, the games have been shown on the large video screen of Red Deer’s Centrium arena, where the Rebels, a major junior team, play. A ticket seller, who said she was not permitted by company rule to give her name, is a genuine Red Deer neutral.

“The people all ask me which side I’m on,” she said. “I always tell them, ‘I’m rooting for Alberta.’”