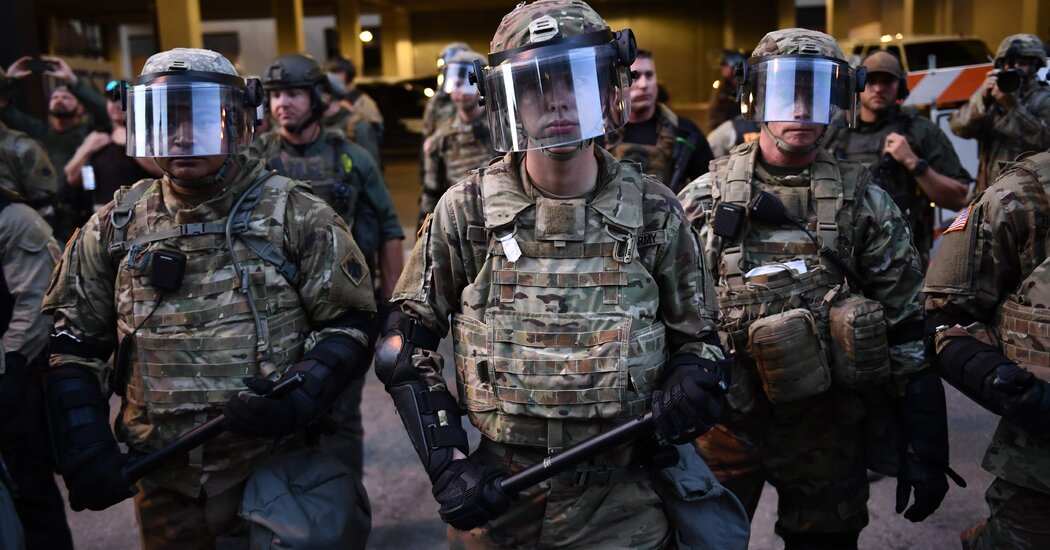 WASHINGTON — A standoff between the governor of Oklahoma and the Pentagon over a coronavirus vaccine mandate for troops has turned into a stormy test of federal power, as President Biden moves to require vaccinations for a broad swath of the American work force.

Last week, Oklahoma’s newly appointed adjutant general for the National Guard, Brig. Gen. Thomas H. Mancino, announced on behalf of the governor, Kevin Stitt, that guardsmen in the state would not be required to get the Covid-19 vaccine, defying a Pentagon directive issued in August that makes vaccinations mandatory for all troops, including the National Guard, by deadlines set by each service branch.

“The order I issued came directly from the governor. That is the lawful order to the men and women of the Oklahoma National Guard,” General Mancino said in an interview, adding that he had been vaccinated.

Pentagon officials said Wednesday that a failure to follow “valid medical readiness requirements” could “jeopardize” the status of troops.

The officials insist that Mr. Stitt has no legal standing to obviate the mandate, though experts on the obscure laws governing the Guard disagree. They note that unless federally deployed, National Guard members are under the jurisdiction of the governor of their state and therefore not subject to federal mandates. “Guard members can only serve one boss at a time,” said John Goheen, a spokesman for the National Guard Association of the United States.

“Oklahoma may be able to take this step as a legal matter, but there are definitely things the federal government can do in response that might make it a painful Pyrrhic victory,” said Eugene Fidell, an adjunct professor of law at the New York University Law School. “The governor and state adjutant general thus might find themselves commanding some very unhappy personnel.”

The Pentagon is bracing for other states to follow Oklahoma’s lead. So far none have, but many are believed to be closely watching the situation, which could become the subject of lawsuits. “This could be contagious,” Mr. Fidell said.

National Guard troops have been caught in the political cross hairs over the years, including in 2018, when several governors said they would withhold or recall their troops from the border with Mexico as the Trump administration separated adults who illegally crossed into the United States from their children. In 1986, several governors balked at sending Guard troops for maneuvers in Honduras ordered by President Ronald Reagan.

But these rare conflicts in the military have never centered on vaccine mandates, which have existed for decades.

The standoff, while so far limited in scope, demonstrates the headaches Mr. Biden faces as he pushes the Jan. 4 deadline for large companies to mandate coronavirus vaccinations or start weekly testing of their workers. The new rule, applying to companies with 100 or more employees, would cover roughly 84 million workers, and is already meeting fierce resistance.

Mr. Stitt is one of several Republican state officials who have been resisting Mr. Biden’s vaccine mandates covering federal employees and contractors.

Some governors who have been more resistant to mandates have so far declined to join Mr. Stitt.

“I took an oath, and I intend to do what I promised the country I would do,” General Thomas Carden, the head of the Georgia National Guard, told a local reporter last week. “It’s cut and dry for us.”

The State of Vaccine Mandates in the U.S.

A growing number of employers, universities and businesses are now issuing some form of a vaccine requirement. Here’s a closer look.

Spokesmen for the Guards in North Dakota and Florida — two other states whose governors oppose vaccine mandates — said they were following the Pentagon order, while Texas officials were more vague.

“The decision whether or not to receive a vaccination is a personal matter each Soldier and Airman must weigh. The Texas National Guard provides the resources necessary for each Service member to make informed decisions,” an unidentified spokesperson said in response to an email query.