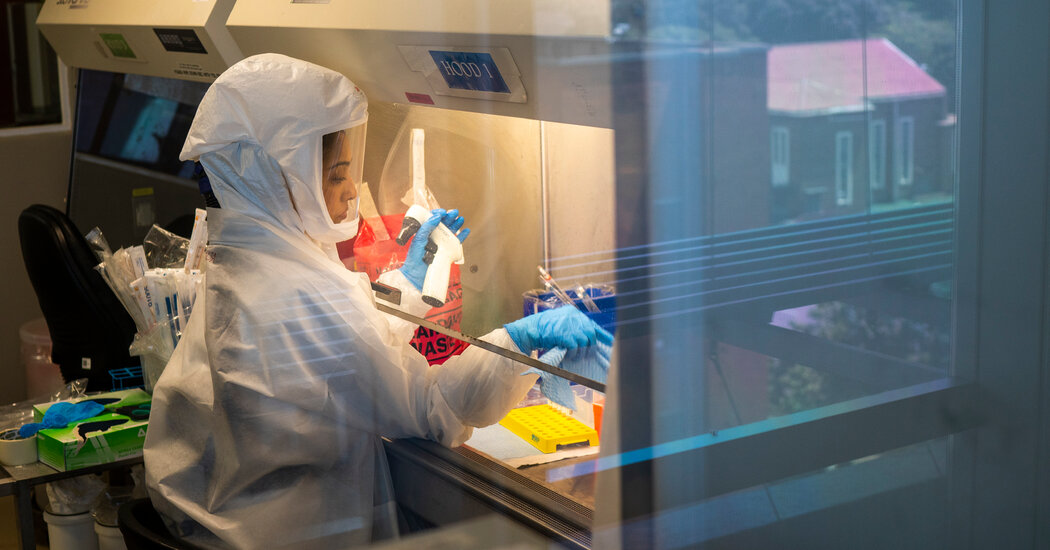 People who have recovered from an infection with the new Omicron coronavirus variant may be able to fend off later infections from the Delta variant, according to a new laboratory study carried out by South African scientists.

If further experiments confirm these findings, they could suggest a less dire future for the pandemic. In the short term, Omicron is expected to create a surge of cases that will put a massive strain on economies and health care systems around the world. But in the longer term, the new research suggests that an Omicron-dominated world might experience fewer hospitalizations and deaths than one in which Delta continues to rage.

“Omicron is likely to push Delta out,” said Alex Sigal, a virologist at the Africa Health Research Institute in Durban, South Africa, who led the new study. “Maybe pushing Delta out is actually a good thing, and we’re looking at something we can live with more easily and that will disrupt us less than the previous variants.”

He posted the new study on the institute’s website on Monday. It has not yet been published in a scientific journal.

Independent scientists said that the results of the South African experiment, though preliminary, were sound. Carl Pearson, an epidemiologist at the London School of Hygiene & Tropical Medicine, said the findings were consistent with what is now happening in England.

“Omicron arrives and grows rapidly, and the Delta trend switches to declining,” he said.

And Nathan Grubaugh, an epidemiologist at the Yale School of Public Health, said he was observing the same pattern in Connecticut. “We are seeing Omicron exponentially rise while Delta cases are falling,” he said. “This suggests to me that Omicron is outcompeting Delta for susceptible individuals, leaving them less susceptible to Delta in the aftermath, and driving down Delta cases.”

When people began getting infected with the coronavirus two years ago, they produced antibodies and immune cells that could provide protection against it. As a result, it was very rare for a person to be reinfected in the months that followed.

But starting in late 2020, new coronavirus variants emerged. Some of them, like Alpha, had mutations enabling them to spread rapidly. Others, like Beta, had adaptations that allowed them to evade antibodies — whether they were produced during a prior infection or in response to a Covid-19 vaccine.

Delta, which came to prominence in the summer of 2021, had mutations that gave it both a superior ability to spread and a moderate ability to evade antibodies. Vaccines still remained effective against Delta, but not quite as much as they had been earlier in the pandemic.

When Omicron emerged in November, it spread faster than even Delta had. Researchers suspected that its speed had two sources. Somehow it was able to transmit quickly — perhaps by replicating in large numbers or by spreading more easily from one person to the next. Omicron was also able to infect vaccinated people and those who had gotten sick with earlier variants.

In an earlier study this month, Dr. Sigal’s team, as well as a number of other research groups, confirmed Omicron’s ability to dodge antibodies from vaccines and earlier variants. To do so, they analyzed blood from people who were either vaccinated or had recovered from Covid, and mixed it with different variants.

Time and again, antibodies that were very potent against Delta and other variants did a poor job against Omicron. This helped to explain why so many vaccinated and previously infected people were coming down with bouts of Omicron, albeit milder than Delta infections.

“This was very difficult because of the holiday period,” he said. “Nobody really wants to stick around and be part of a study.”

Seven of the patients were vaccinated and six were not. The scientists did not determine which volunteers had been previously infected with other variants of Covid. But given that the vast majority of South Africans had Covid before Omicron, it’s likely that most of the volunteers had not been infected for the first time with Omicron.

The researchers found, unsurprisingly, that the patients’ blood contained a high level of antibodies potent against Omicron. But those antibodies proved effective against Delta, too.

This was particularly surprising because the team’s study from earlier this month showed that the converse was not true: Antibodies produced after a Delta infection offered little protection against Omicron.

As Omicron races through country after country, Dr. Sigal speculated that it would leave people with immunity not just to itself, but to Delta as well. That would mean that people who get infected with Delta will have fewer opportunities to pass on the virus to others. At the same time, Omicron will readily infect people who have recovered from Delta. That competitive edge could spell doom for Delta.

Of course, that’s a lot of speculation about the future health of billions of people based on only 13 volunteers. What’s more, Dr. Sigal can’t say exactly what accounts for the benefit Omicron provides against Delta. It’s possible that the antibodies it produces act more broadly against other variants as well.

New C.D.C. guidelines Hoping to prevent further disruptions to daily life, the C.D.C. reduced the period that certain infected Americans must sequester to five days from 10. This change applies only to those without symptoms, or those without fevers whose other symptoms are improving.

Alternatively, it’s also possible that the Omicron infections simply roused the existing immunity in volunteers, provided either by vaccinations or previous infections. If that’s true, then it remains to be seen what will happen to unvaccinated people who get infected for the first time with Omicron — a fate that millions of Americans may experience in the weeks to come.

Even if Omicron does wipe out Delta, that doesn’t mean that Omicron will reign supreme for generations. Once people gain immunity to Omicron, natural selection may favor mutations that produce a new variant that can evade that immunity.

Depending on the particulars of the coronavirus, Dr. Pearson said he could foresee three different futures.

In one, Covid mimics the flu, with one seasonal variant pushing out the previous one, year after year.

In a second, Covid mimics dengue fever, with several variants coexisting that evade different antibodies, leading people to get sick every few years from one of them.

The third possibility is the most desirable: One variant wins out and becomes an easily prevented pathogen. But Dr. Pearson considers that the least likely scenario.

“I’d bet we can rule out that it’s trending to a place where it locks into a single variety that’s long-term immunizing and becomes a childhood infection like measles,” he said. “But that’s also still possible.”