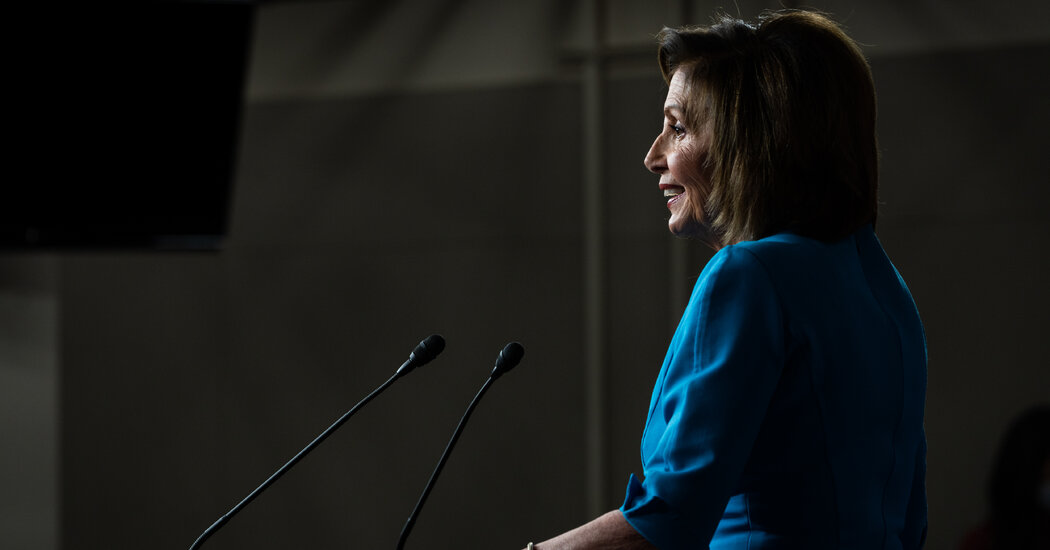 WASHINGTON — House Democrats, increasingly confident that they have the support to pass their $1.85 trillion social policy and climate change bill, drove toward a vote on the package as early as Thursday evening, with Speaker Nancy Pelosi expressing optimism that the measure would ultimately reach President Biden’s desk.

“It’s pretty exciting. This is historic; it is transformative,” Ms. Pelosi said on Thursday morning, telling reporters that the final pieces should fall together later in the day to allow for a vote on legislation known as the Build Back Better Act.

Democrats can afford to lose only a few votes given their slim margin of control. But the speaker was leaving nothing to chance.

Technical changes will have to be made to the bill before the vote to ensure that it can be considered under special rules known as reconciliation, which shield it from a filibuster, allowing Democrats to push it through over unified Republican opposition in the Senate. And some moderate Democrats are still waiting on a final cost estimate from the Congressional Budget Office which Ms. Pelosi said should arrive by 5 p.m.

So far, the committee-by-committee judgments from the budget office, Congress’s official scorekeeper, have not raised fiscal concerns. And House Democrats appear eager to pass the measure — the broadest intervention in the nation’s social safety net in 50 years and by far the largest ever effort to combat climate change — and go home for their weeklong Thanksgiving recess.

Ms. Pelosi talked up the areas of agreement that Democrats had reached in both the House and Senate: universal prekindergarten, generous assistance with child care costs, prescription drug price controls and home health care for older Americans.

But if the bill clears the House, it faces a difficult road in the Senate, where Republicans will have a clear shot to offer politically difficult amendments, any one of which could unravel the delicate Democratic coalition behind it. Two Democratic centrists, Senators Kyrsten Sinema of Arizona and Joe Manchin III of West Virginia, have not committed to supporting it, and a single defection would bring the measure down in the evenly divided chamber.

Some significant provisions remain in play, including a measure to grant work permits and legal protection to many undocumented immigrants; funding for four weeks of paid family and medical leave; and a generous increase in the federal tax deduction for state and local taxes paid, from $10,000 a year to $80,000.

Liberals like Senator Bernie Sanders, the Vermont independent who is the chairman of the Budget Committee, and some populist conservatives such as Representative Jared Golden, Democrat of Maine, have raised strong objections to that tax measure, which would amount to a major tax cut for wealthy homeowners who itemize their deductions. But Democrats from high-tax states like New Jersey and New York have demanded the provision as the price for their vote.

Ms. Pelosi, who pronounced herself a supporter of the tax provision, defended it on Thursday, saying that it was “not about tax cuts for wealthy people,” but ensuring that state and local governments have the tax revenues they need to provide education, fire and rescue services.

A proposal in flux. President Biden’s social safety net and climate bill is back on hold, though the House plans to vote on the $1.85 trillion spending plan the week of Nov. 15. The details are still being worked out, but here’s a look at some key provisions:

She repeatedly said she had no fear that the bill would be brought down in the Senate or altered substantially.

“The Senate will act its will on it, but whatever it is, it will still be transformative and historic,” she said.

Senator Chuck Schumer of New York, the majority leader who will have to take up the mantle if and when the measure clears the House, promised Thursday to finish the task.

“Creating jobs, lowering costs, fighting inflation, keeping more money in people’s pockets — these are things Americans want and what Americans need and it’s what Build Back Better does,” he said on the Senate floor. “We are going to keep working on this important legislation until we get it done.”