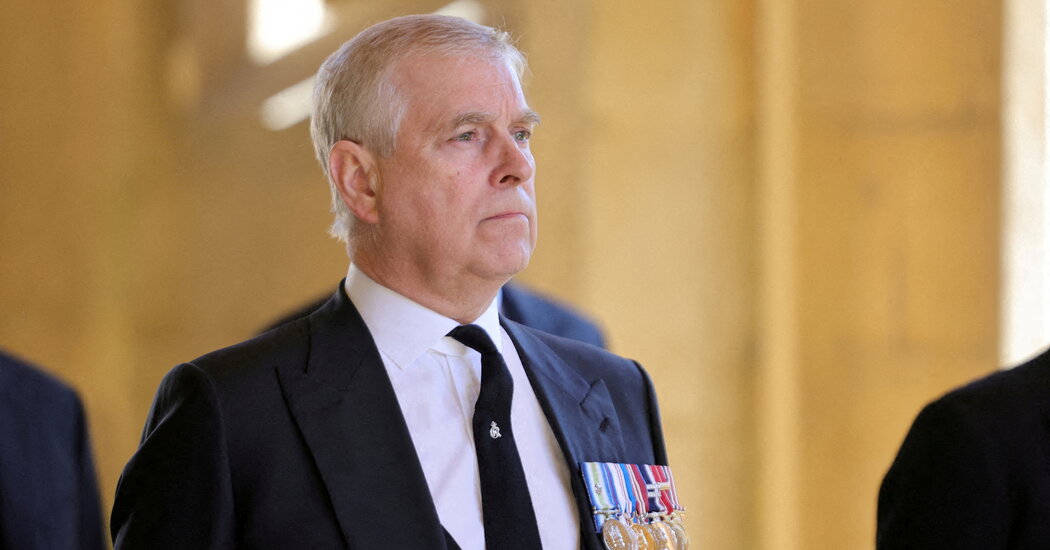 Prince Andrew, the disgraced second son of Queen Elizabeth II, has settled a lawsuit brought by Virginia Giuffre, a woman who had accused him of raping her when she was a teenage victim of Andrew’s friend, the notorious sex offender Jeffrey Epstein, according to a new court filing in Manhattan on Tuesday.

The amount that Andrew, 61, will pay Ms. Giuffre is confidential, the parties said in a joint statement attached to the filing.

Andrew also “intends to make a substantial donation” to a charity “in support of victims’ rights,” the statement says.

The deal comes just weeks before Andrew was scheduled to sit for a deposition, in which he would have been questioned under oath by Ms. Giuffre’s lawyers. Andrew did not admit to any of Ms. Giuffre’s accusations against him in the statement announcing the settlement.

The lawsuit by Ms. Giuffre, one of the most prominent of Mr. Epstein’s accusers, had cast a shadow over the royals at a time when Queen Elizabeth, the 95-year-old British monarch, was marking her 70th year on the throne. Andrew was forced to relinquish his military titles and royal charities, no longer was to use the title “His Royal Highness,” and was “not to undertake any public duties,” Buckingham Palace said in a statement last month.

In her lawsuit, Ms. Giuffre claimed that Andrew, known as the Duke of York, sexually abused her when she was under 18 at Mr. Epstein’s mansion in Manhattan and on his private island, Little St. James, in the U.S. Virgin Islands.

The suit also claimed that Andrew, Mr. Epstein and his longtime companion, Ghislaine Maxwell, had forced Ms. Giuffre to have sexual intercourse with Andrew at Ms. Maxwell’s home in London. Ms. Giuffre had feared repercussions if she disobeyed the three because of “their powerful connections, wealth and authority,” the lawsuit said.

Mr. Epstein, 66, was found dead in August 2019 in a Manhattan jail cell while awaiting trial on sex-trafficking charges. Ms. Maxwell, 60, was convicted of sex trafficking and other counts in a trial in December.

The settlement may serve as a capstone to the years of investigations and litigation that has surrounded Mr. Epstein and his associates. The Epstein saga implicated or involved people at the highest levels of celebrity and politics — including Andrew — on both sides of the ocean, spawning court cases and conspiracy theories.

Andrew B. Brettler, a lawyer who has represented Andrew in the lawsuit, did not respond to a request for comment.

Although Andrew never faced criminal charges, his efforts to put an end to the lingering questions about his links to Mr. Epstein backfired. An interview he gave to the BBC in November 2019, several months after Mr. Epstein’s death, drew a storm of negative reaction and led him to step down from public duties.

After he issued a statement saying he was ready to help “any appropriate law enforcement agency with their investigation, if required,” Geoffrey S. Berman, then the U.S. attorney in Manhattan, who was overseeing the sex-trafficking investigation, repeatedly called out Andrew for failing to live up to that pledge.

A spokesman for the U.S. attorney’s office declined to comment on Tuesday when asked whether Andrew was under investigation by the office.

David Boies, a lawyer for Ms. Giuffre, said the settlement with Andrew “does not in any way insulate him from any criminal liability that would otherwise exist.”

In the joint statement on Tuesday, Andrew said it was “known that Jeffrey Epstein trafficked countless young girls over many years,” and that he “regrets his association with Epstein and commends the bravery of Ms. Giuffre and other survivors in standing up for themselves and others.”

Understand the Allegations Against Prince Andrew

The sexual-misconduct allegations. The accusations against Prince Andrew first surfaced in 2019, after Mr. Epstein was arrested on federal charges. One accuser, Virginia Roberts Giuffre, claimed that Mr. Epstein had trafficked her to Prince Andrew, and that the prince had raped her when she was 17.

The settlement. Prince Andrew settled the lawsuit for an undisclosed amount on Feb. 15, just weeks before he was scheduled to sit for a deposition. He did not admit to any of the accusations against him in the statement announcing the deal.

Most of the settlements reached by accusers of Mr. Epstein have been kept confidential, although the four women who testified at Ms. Maxwell’s trial each said they had received payouts, as high as $5 million before legal fees, from a victims’ compensation fund drawn from Mr. Epstein’s estate.

Mr. Boies said the entire amount of Ms. Giuffre’s settlement with Andrew, as well as any charitable contribution Andrew makes, will go to her and the charity, noting that his firm had represented her pro bono, without a fee.

The joint statement’s depiction of Ms. Giuffre as courageous contrasts sharply with the way Andrew’s lawyers described her in October, when they asked Judge Lewis A. Kaplan of Federal District Court to dismiss her lawsuit.

Andrew’s lawyers claimed at the time that the lawsuit was part of a longstanding effort by Ms. Giuffre to profit from allegations she had made against Mr. Epstein and others. They also claimed that Ms. Giuffre had sold articles and photographs to news outlets and reached secret deals to resolve abuse claims.

“Giuffre has initiated this baseless lawsuit against Prince Andrew to achieve another payday at his expense and at the expense of those closest to him,” Andrew’s lawyers wrote then. “Most people could only dream of obtaining the sums of money that Giuffre has secured for herself over the years.”

In the statement on Tuesday, Andrew said that he had never intended “to malign Ms. Giuffre’s character and he accepts that she has suffered both as an established victim of abuse and as a result of unfair public attacks.”

The settlement came relatively quickly — just six months after Ms. Giuffre filed her suit and one month after Judge Kaplan denied Andrew’s motion to dismiss it.