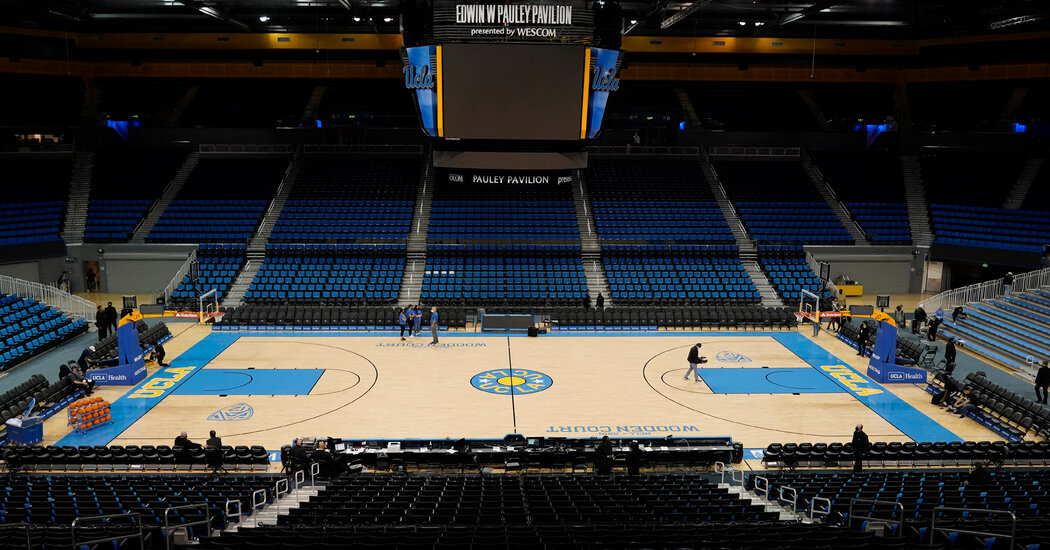 In the midst of a new wave of coronavirus infections sweeping the globe, sports officials are scrambling to figure out how to keep their seasons going with schedules intact, to maintain the normal churn of competition and revenue.

They shouldn’t dither with such foolishness.

It’s time to press pause on games, matches and meets. If we’re genuinely interested in public health, genuinely invested in slowing the virus and saving lives, we need to look at the storm that has gathered and take shelter from it.

Come back in February, or later. By then, if we play this right and we’ve collectively worked to slow the spread and proliferation of variants, we can get back to the games. Only this time with a renewed sense of diligence and tighter restrictions.

There’s an inescapable feeling of déjà vu right now in the sports world, where fear and uncertainty about the coronavirus rage again.

Just look at what’s happened over the last few days.

Scores of N.F.L. players have been placed on the league’s Covid-19 reserve list this week after positive tests, including double-digit numbers of players from the Cleveland Browns and Washington Football Team, prompting the league to go back to the mask mandates and prohibitions on indoor meetings of 2020.

Dozens more players have been sidelined in the N.B.A., including most of the Chicago Bulls and almost half the Nets’ roster.

The coronavirus sent a formidable chill across the N.H.L., causing the Carolina Hurricanes and Minnesota Wild to cancel their game and Calgary Flames to temporarily shutter.

With the virus proliferating in Canada, Ontario-based teams like the Toronto Maple Leafs and Raptors and the Ottawa Senators will limit capacity at their games thanks to new local ordinances.

In the heart of college basketball season, men’s and women’s programs have postponed a litany of games since Wednesday, some within hours of tipoff.

In Europe, several Premier League games in the world’s richest soccer league were postponed after multiple outbreaks on multiple teams.

We all remember March 2020, when the cancellation of college and N.B.A. basketball games signaled that the coronavirus was about to turn inside out life as we knew it?

It’s been 20 months and most everyone has relaxed their vigilance. In sports, where the proximity of competition and camaraderie make viral spread even easier, players, fans, and officials have let up as if the war against the pandemic were over. But now we’re hit with a new hard reality: Yet another wave, propelled by the highly transmissible Omicron variant, adds another layer of danger.

“It’s a wildfire right now,” says Ali Mokdad, professor of health metrics sciences at the University of Washington. His institute analyzed data to predict the virus’s course and its effects. All throughout the pandemic, those predictions have been remarkably accurate.

Mokdad, like most other experts, is fearful about what the United States will see over the next few weeks, when the holidays will compel more travel and indoor gatherings and millions will be susceptible to the aggressive Omicron variant, the dangerous Delta variant and the seasonal flu.

“During the holidays,” Mokdad continued, “I expect the wildfire to run rampant.”

What should the sports world do?

Take the holidays off. No games. No practices. No fans jammed in stands mask-less, passing along Omicron with every high-five and throaty cheer.

Regather in February or later, assess where we are and what we need to do to better, then consider coming back. If that means shorter seasons and games lost and careers put on hold, so be it.

We’re in now-familiar territory, feeling now-familiar tension: How do we balance our need for entertaining sports with a public health crisis the sports world has yet to come to grips with? Millions have died across the globe, including roughly 800,000 in the United States. Then there’s the incalculable damage in severe illness, cases that linger for months, and the hospitals stretched to the breaking point.

We’re at war with the virus, and the sports world is among the most powerful social forces in the world. It should take the lead in doing the prudent thing and pausing schedules.

Players won’t like it. Mostly, they’re too competitive and too armed with a sense of physical invulnerability. They aren’t inclined to slow their roll, even for a while.

Leagues and team owners and sponsors will bray against it, because of their insatiable desire to make money, money and more money. Notably, in the Premier League, where five games in the last 10 days have been called off, several teams are now known to favor a suspension of the league’s schedule. But such sentiments are in the minority so far.

Fans won’t like it. No one wants to miss out on more athletic spectacle — especially now, sick as we are of worrying about sickness, needy as we are for the balm games can provide.

Miss the holiday season, all that football, basketball, hockey and international soccer?

Well, at this rate of infection, there’s a chance there won’t be enough players to field competitive teams for those big-splash games.

Assuming we weather the storm, we can get back to our games later. And when we do, changes are in order.

The N.F.L. and N.B.A., for example, both foolishly scaled back on their testing of players and team staff members compared to last season. Neither league required players to be vaccinated, both nudging unvaccinated players to inoculate by offering a carrot: Get your shots and you get less testing, fewer nettlesome restrictions like wearing masks or being separated from teammates at team headquarters.

The time for nudging is over. Most players and team personnel are vaccinated, which remains, by far, the best way to keep severe illness and hospitalization tamped down. Now it’s time to get everyone on board.

It’s time for sports leagues to mandate vaccination for every player. No shot, no games or practices or hanging at team headquarters.

Time to get back to the rigor of daily testing.

Time that all teams require proof of vaccination from fans and, yes, the wearing of masks. When we see 100,000 fans packed shoulder-to-shoulder at the biggest stadiums, a sea of unmasked multitudes, everyone screaming at the top of their lungs, what message does that send?

It sends this message: Everything is fine. We can relax. No need to worry.

But we should be plenty worried because, once again, a wildfire is bearing down. And that’s cause enough for a holiday break for sports.