Public Displays of Resignation: Saying ‘I Quit’ Loud and Proud 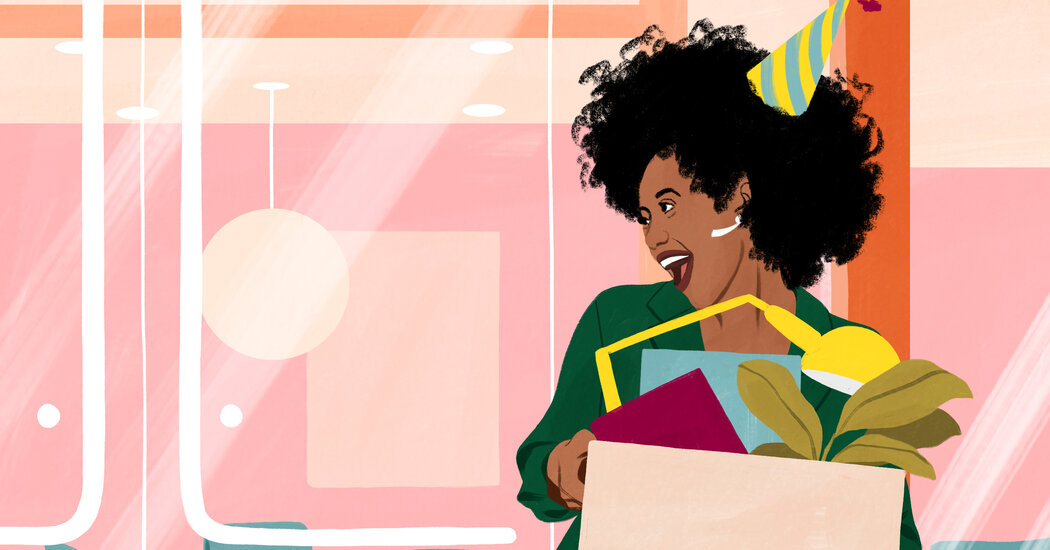 For Gabby Ianniello, it was the blisters from putting on stilettos every morning for her real estate job, which had called employees back to the office last fall. For Giovanna Gonzalez, it was those three little letters, R.T.O., coming from her investment management boss. For Tiffany Knighten, it was finding out that a teammate’s annual salary was over $10,000 higher than hers for a role at her level.

They were fed up. They were ready to resign. And they wanted their TikTok followers to know.

“My mental health welcoming me back after leaving c*rporate america,” read the caption on Ms. Knighten’s video posted in September, which featured her wearing a hat that said “I hate it here” and dancing to Ariana Grande’s “Thank U, Next.”

America’s quitting rate — the percentage of workers voluntarily leaving their jobs — is historically high, reaching 3 percent this fall. It is also exceptionally visible. People are celebrating their resignations in Instagram reels or “QuitToks.” They’re turning to the Reddit forum R/antiwork, where subscriptions ballooned this year, to gloat about being free from their 9-to-5 jobs. They’re tweeting screenshots of texts to their bosses declaring they have quit.

“People have told me, ‘Sis, I quit my job. Let’s go get drinks,’” Ms. Knighten, a 28-year-old Black woman, said. She said she faced persistent microaggressions in her previous workplace and left to run her own communications agency called Brand Curators. “Everyone is loud and proud to say they let go of what wasn’t serving them.”

Even chief executives are joining in on the public displays of resignation. The head of Twitter, Jack Dorsey, this week shared on his own platform that he was stepping down. “Not sure anyone has heard but, I resigned from Twitter,” Mr. Dorsey wrote, posting a screenshot of an email that concluded, “PS I’m tweeting this email. My one wish is for Twitter Inc to be the most transparent company in the world. Hi mom!”

There once was a time when broadcasting the decision to quit a job might have seemed unwise, or at least uncouth. Career coaches traditionally advised their clients not to disparage former employers online. Though there was always a subset of workers who quit loudly on principle, recruiters often raised their eyebrows at candidates who’d gone public about negative experiences in their previous roles. But after over a year of laboring through a pandemic, protests over racial justice and all the personal and societal tumult that followed those events, some workers are ready to reject stale professional norms and vent.

“People are frustrated, exhausted, triggered,” J.T. O’Donnell, founder of the career coaching platform Work It Daily, said. “When people are triggered, you see fight or flight responses. This is a fight response.”

If quitters think they can punch back at their old bosses without fear of alienating potential future employers, they might be right. The supply-demand curve of the labor market is working in their favor, and employers are growing less choosy. The share of ZipRecruiter posts that require “no prior experience” has jumped to 22.9 percent this year from 12.8 percent in 2020. The share requiring a bachelor’s degree fell to 8.3 percent from 11.4 percent. Some parts of the United States are seeing significant gaps between job openings and job seekers — Nebraska, for example, has 69,000 positions unfilled and 19,300 unemployed people. Experiences that might have once hurt a job seeker’s prospects, like having taken time off for child care, are being forgiven.

“I’ve been doing this for 25 years, and it’s the tightest labor market I’ve ever seen,” Tom Gimbel, head of LaSalle Network, a national staffing firm, said. “I have clients that are in such need of people that if they weren’t looking at people who had résumé gaps before, now they are.”

Some hiring managers have come to feel that making what they previously considered a dicey hire — say, someone who blasted a former chief executive online — might be safer than letting a staffing shortage persist for too long, resulting in burnout.

“In the past, it might have caused people a moment of pause, in terms of what it would mean for their organization, if a working relationship didn’t end on wonderful terms,” Melissa Nightingale, co-founder of Raw Signal Group, a management training firm, said. “Now the big focus for organizations is less on the individual risk of that one post and more on the broader risk of an understaffed work force.”

Executives are also more sympathetic to the quitters within their own ranks. Bosses used to see departures as a betrayal, like “being dumped in high school,” according to Anthony Klotz, an organizational psychologist at Texas A&M University. Now, they understand that employees are restless. Mr. Klotz noted an increase in employers who offer a one-year leave of absence to workers who resign, meaning the quitters can choose to return at any point with all their prior benefits in place.

But some people aren’t concerned about slamming the door behind them on their way out.

Ms. Ianniello, 28, has a lengthy list of quibbles with her old corporate lifestyle. When she worked as a marketing coordinator in Manhattan, she used to wake up at 4:45 a.m. to an iPhone alarm that she labeled “you got this babe,” then blow out her hair before starting a 45-minute commute. Her days were composed of sad desk lunches and “per my last email”s.

She quit in February, with about $10,000 in savings, and posted a TikTok over the summer telling her followers that she’d found a new sense of bliss. “Right now, quitting is the hot thing to do,” Ms. Ianniello, who started a podcast called Corporate Quitter, said. “It’s almost like the dot-com bubble, when you made your AIM name and you were an early adopter. You get to be part of the Great Resignation.”

Some career coaches are cringing at the rush to take resignation stories public. Many warned that hiring managers, even desperate ones, search candidates on social media and consider posts about former employers to be a red flag. Others noted that the current labor shortage, with the work force down by about 3 million people, won’t be permanent and that at some point, jobs will be in higher demand than workers.

“This kind of thing pendulums back and forth,” Ms. O’Donnell said, adding that she was alarmed by some of the breaches in etiquette she had seen from people leaving their jobs in the current market, where the standard of giving two weeks’ notice has shifted: “You have some people who ghost. They just don’t ever go back in. They won’t take any phone calls.”

While workers might be tuning out career advice from coaches, they’re finding guidance elsewhere, especially in online communities. TikTok has hundreds of videos with the hashtag #quitmyjob,including some with advice or moral support for people considering a resignation.

Ms. Gonzalez, 32, who left her investment management role in Phoenix last June, said she was hesitant to publicize the experience because she didn’t want former colleagues to see the video and feel judged. But she also thought her followers might feel motivated hearing about a first-generation American who saved judiciously, putting aside about $20,000 so she could afford to leave a secure position.

“I feel like I sound like Kourtney Kardashian, but I need some time off the hamster wheel to focus on myself,” Ms. Gonzalez told followers on her TikTok account, adding: “I share this with you guys not to brag, but to show you this is possible.”

It’s decades of motivational posters, but in reverse: Anyone can be a quitter.