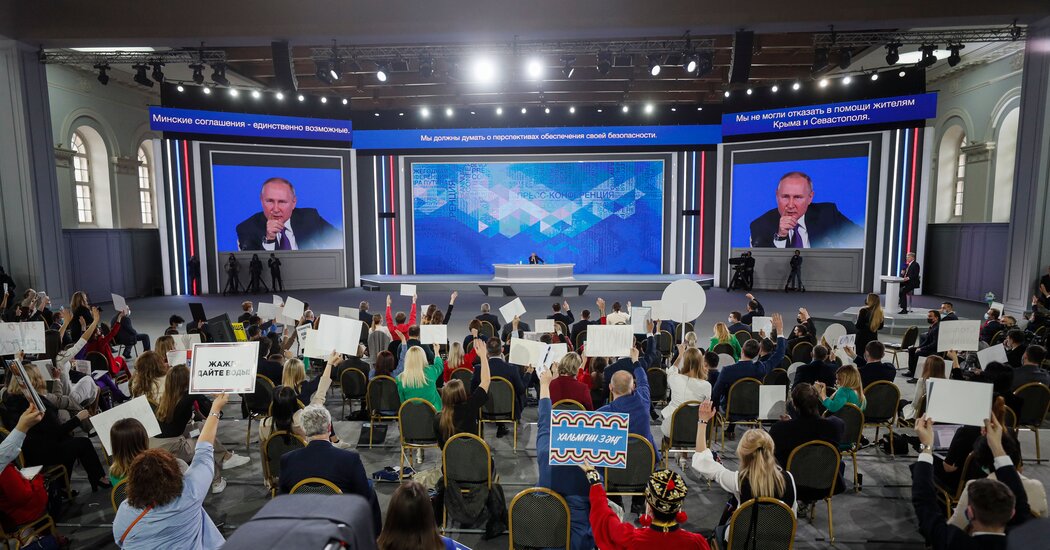 MOSCOW — President Vladimir V. Putin of Russia delivered sharp criticism of the West on Thursday for rising military tensions in Eastern Europe, saying that Moscow was not to blame for talk of “war, war, war” because it was merely defending historically Russian territories.

He said that the Biden administration had agreed to hold talks with Russia on Moscow’s security concerns starting in January, calling it a positive sign, but added that Russia would expect quick answers on its demands.

“It was the United States that came with its missiles to our home, to the doorstep of our home,” he said, referring to NATO expansion. “And you demand from me some guarantees. You should give us guarantees. You! And right away, right now.”

Mr. Putin’s comments, at a traditional year-end news conference, were being closely watched after a drumbeat of warnings from Moscow about a potential escalation of military conflict in Ukraine. Two days earlier, Mr. Putin told a gathering of security officials that he was ready to take “military technical measures,” a reference to a possible use of force, if Russia’s security requests went unmet.

Still, after weeks of ominous rhetoric, Mr. Putin did not seize the opportunity of his marquee annual appearance to markedly escalate things further. His comments largely echoed a list of demands laid out last week by Russian diplomats as Russian troops mass near the border with Ukraine.

What distinguished his appearance on Thursday was its appeal to a domestic audience watching live on Russian television, as he focused on what he described as threats to Russians and Russian speakers inside Ukraine.

“Now, they tell us, ‘war, war, war,’” Mr. Putin said of the West, conveying the sense that a Western-aligned Ukraine, not Russia, intended to set off conflict. “The impression is they are planning” a military operation, he said. “And we are warned in advance, ‘Don’t get involved, don’t meddle, don’t defend these people.’ If you defend, these sanctions will follow.”

Russia has already intervened militarily in Ukraine. After street protesters deposed a pro-Russia president in 2014, Russia annexed the Crimean Peninsula and fomented a separatist uprising in two provinces in eastern Ukraine. At least 13,000 soldiers and civilians on both sides have died in a conflict that has continued on Ukraine’s eastern border.

Mr. Putin began his appearance by focusing on domestic issues like the economy and the coronavirus. He asserted that Russia had handled the economic challenges of the virus better than other major economies, though he acknowledged a cost in lives lost and a drop in life expectancy last year. He also noted what he said were positive economic indicators, including good results in construction and a good harvest.

When finally asked for a “realistic prognosis” of whether Russians could expect a war this winter, Mr. Putin said he would try to answer “in a maximally short way,” but nonetheless laid out a historical justification for possible use of force, going back more than 100 years.

He argued that lands that should be seen as historically part of Russia were included in the Soviet-era boundaries of Ukraine. After the Soviet breakup, Mr. Putin said, Moscow acquiesced to their loss, so long as Ukraine was neutral. But he said Russia could not tolerate the basing of foreign militaries in these areas.

“They are creating on this territory an anti-Russia, with the constant sending over of contemporary weapons, brainwashing the population,” Mr. Putin said. “Imagine the historical perspective of Russia for living from now on, to be always looking over our shoulders, what is going on over there?”

United States intelligence agencies have said that Russia has tens of thousands of troops near the Ukrainian border, with plans to amass an invasion force of up to 175,000 soldiers. They have also said it is not yet clear whether Mr. Putin has decided to invade.

Russian diplomats detailed their demands on Eastern Europe — including a written pledge from NATO not to expand east — in two ultimatums last week directed at the United States and the alliance.

The proposals suggested establishing a Cold War-style security arrangement in Europe based on spheres of influence. While NATO rejected the demand to close its doors to new members, the Biden administration has agreed to negotiate broadly, offering a possible path to unwinding the tensions.

Analysts have also weighed the possibility that Mr. Putin is looking for concessions on a range of issues, even some not directly tied to security. These include energy and pipeline negotiations in Europe.

That means that what Russia wants, exactly, has become something of a guessing game — leaving diplomats and security analysts hanging on every word from Mr. Putin this winter.

Mr. Putin’s marathon year-end news conferences are a longtime tradition, meant to demonstrate his stamina and authority as he answers questions for hours on end. They have also been a stage for policy pronouncements.

In his remarks on the pandemic, Mr. Putin said he had no plans to impose fines on or to criminally prosecute people hesitant to be vaccinated, though Russia has one of the lowest levels of vaccination in Europe, at 56 percent of the population. The government has not introduced vaccine mandates, and Mr. Putin said on Thursday that mandates would be counterproductive.

“We need to relate to people with respect, despite their positions,” he said, “and to patiently explain” the need to inoculate.

“What they are now doing on the territory of Ukraine, or trying to do, or planning to do, is not thousands of kilometers from our national borders,” Mr. Putin said. “It’s on the doorstep of our home. They just have to understand that we have nowhere left to retreat.”