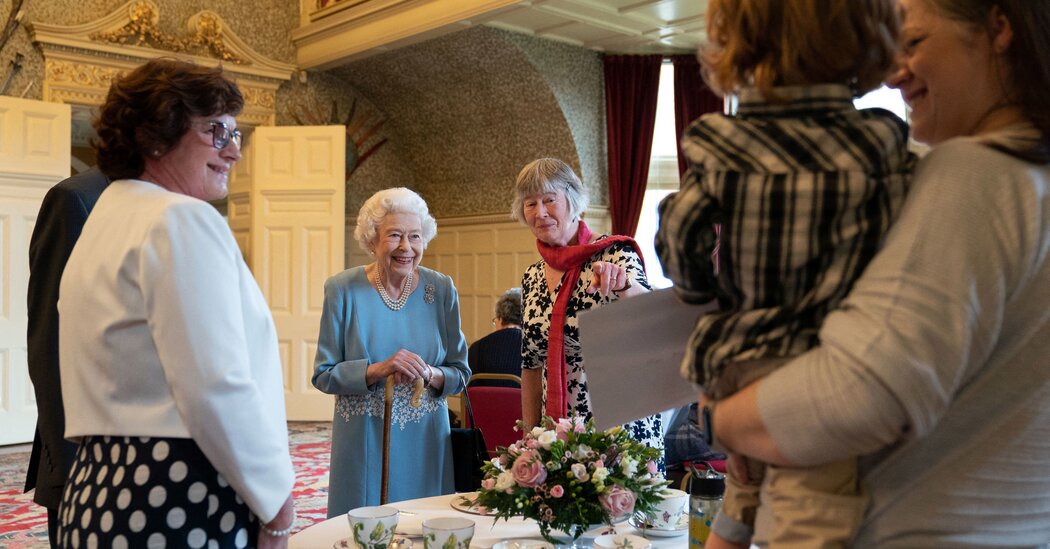 Queen Elizabeth II has been infected with the coronavirus, Buckingham Palace said on Sunday, becoming one of the world’s most prominent figures to battle the virus and deeply rattling the country she has led for seven decades.

The palace issued few details about the condition of the queen, who turns 96 in April. She is one of several people at Windsor Castle who are infected, a palace official said, suggesting an outbreak at the royal residence, west of London, where the queen has spent most of her time since the pandemic engulfed Britain in March 2020.

“Buckingham Palace confirm that the queen has today tested positive for Covid,” the palace said in a statement. “Her Majesty is experiencing mild coldlike symptoms but expects to continue light duties at Windsor over the coming week. She will continue to receive medical attention and will follow all the appropriate guidelines.”

Elizabeth met earlier this month with her eldest son and heir, Prince Charles, who was later reported to be reinfected with the coronavirus and went into isolation. He last contracted a mild case of the virus in March 2020. The palace on Sunday did not address whether Charles was the source, but officials pointed to the number of cases at Windsor Castle, suggesting she could have been infected by others in the royal household.

The news of the queen’s illness came as Prime Minister Boris Johnson was poised to relax the remainder of coronavirus restrictions in England, including a requirement to isolate for five days after receiving a positive test. Mr. Johnson will introduce plans on Monday to lift the regulations by the end of February, prompting some members of the opposition Labour Party to warn that he was acting rashly.

Britain reported 25,696 new cases on Sunday, accelerating a decline since the latest wave of the virus peaked in early January with more than 200,000 cases a day. Nearly 1,300 people were admitted to hospitals and 74 people died — statistics that are also on the decline, but at a more moderate pace than cases.

“Now is the moment for everybody to get their confidence back,” Mr. Johnson told the BBC’s “Sunday Morning” show, before the queen’s condition was made public. Hours later, on Twitter, the prime minister said he wished “Her Majesty The Queen a swift recovery from Covid and a rapid return to vibrant good health” — one of a flood of well wishes from across Britain and around the world.

Britons have no shortage of experience with prominent public figures contracting Covid. In addition to Charles, 73, his wife, Camilla, tested positive four days after he did. His elder son, Prince William, had the virus in early 2020, disclosing it only months later. Mr. Johnson suffered a severe bout of Covid around the same time and ended up in an intensive care unit.

Still, even that alarming episode paled next to news that the queen, who recently marked her 70th anniversary on the throne and has reigned for longer than most Britons have been alive, had contracted a potentially deadly disease.

It comes on top of other health concerns about Elizabeth. In October, she canceled multiple public appearances, including a solemn anniversary to honor Britain’s wartime dead. She also has stiffness in her legs and has begun using a walking stick.

Last Wednesday, she appeared fragile at an audience with two senior military officers at Windsor Castle. When they asked how she was, the queen, smiling and clutching the stick, gestured to her legs, and said, “Well, as you see, I can’t move.” Neither the queen nor her guests were wearing face masks.

Until recently, Buckingham Palace had gone to extraordinary lengths to protect the queen from exposure to the virus. She retreated to Windsor in early 2020 with her husband, Prince Philip, and lived in virtual quarantine for more than a year. When she addressed the nation during a particularly dark period, in April 2020, she recorded the speech with only a single camera operator in the room.

Elizabeth received a dose of a coronavirus vaccine in January 2021 at Windsor Castle, along with Philip. The palace has not confirmed any subsequent vaccine doses, but she is widely believed to have received two, as well as a booster. Charles and Camilla have confirmed they are fully vaccinated and boosted.

Buckingham Palace has been extremely circumspect with details about the queen’s health. In October, the palace confirmed that she had been admitted to a hospital for tests only after a London tabloid reported it. It did not say whether she had been tested for the virus after Charles was reinfected this month.

Philip died last April at age 99, and the queen was forced to isolate herself during his funeral service. A photographer captured a poignant image of her, grieving alone and wearing a mask, in a choir stall at St. George’s Chapel at Windsor.

That image has taken on political resonance in recent weeks, as Mr. Johnson has battled a scandal over parties held in Downing Street that violated lockdown restrictions. Two of the gatherings were on the evening before Philip’s funeral, prompting Mr. Johnson to apologize to the queen.

The circumstances of the queen’s infection remained wreathed in questions. Charles was at Windsor Castle on Feb. 8 for an investiture ceremony. He got the news that he had tested positive on Feb. 10 and postponed a trip to Winchester, England, at the last minute.

There were similar concerns about the potential exposure of the queen the first time Charles was infected. The prince’s royal household confirmed his positive test on March 25, 2020. He had met his mother on March 12, only a day before his doctors assessed he could have been infectious. A spokesman for the prince said on Sunday that he did not plan to issue a statement on the queen’s condition.

Given the transmissibility of the Omicron variant of the coronavirus, which is the dominant variant in Britain, public health experts said the queen could have picked it up from anyone. In addition to the military officers, she played host to other visitors, including a group on Feb. 5 that helped mark the 70th anniversary of her accession to the throne.

“Omicron is incredibly infectious — possibly the most infectious disease in recent human history — and it’s therefore unsurprising the queen has also tested positive,” said Devi Sridhar, the head of the global public health program at the University of Edinburgh. The queen’s advanced age, she said, was an added challenge.

Buckingham Palace tried to ease concerns about Elizabeth by issuing a congratulatory message from her to Britain’s women’s curling team, which won a gold medal at the Winter Olympic Games in Beijing.

“I know that your local communities and people throughout the United Kingdom will join me in sending our good wishes to you, your coaches, and the friends and family who have supported you in your great success,” she said.

A palace official said she had signed off on the statement on Sunday morning, before her condition was made public.

In recent weeks, Elizabeth seemed to be moving on multiple fronts to settle the royal family’s business. Last week, her second son, Prince Andrew, reached an out-of-court settlement of a sexual assault case filed against him by Virginia Giuffre, who accused him of raping her when she was a teenager.

The settlement spares the royal family the prospect of Andrew having to testify under oath about his contacts with Ms. Giuffre, which would have cast a long shadow over the queen’s Platinum Jubilee celebrations in June.

On the weekend she marked her accession, the queen said in a statement that she hoped that when Charles succeeded her, Camilla would be known as queen consort — an endorsement that the couple had long sought.

“We are deeply conscious of the honor represented by my mother’s wish,” Charles said in a statement. “As we have sought together to serve and support Her Majesty and the people of our communities, my darling wife has been my own steadfast support throughout.”

On a blustery, rainy day in London on Sunday, people expressed anxiety about the queen, mixed with hope that she would get first-rate medical care. Above all, it seemed to drive home the reality that the coronavirus spares nobody.

“It doesn’t have boundaries,” said Hussein Ahmed, 34, who was waiting for a bus in North London. “It does not give a damn about whether you are the queen or a king or a normal civilian, a person in high power — you are getting it.”