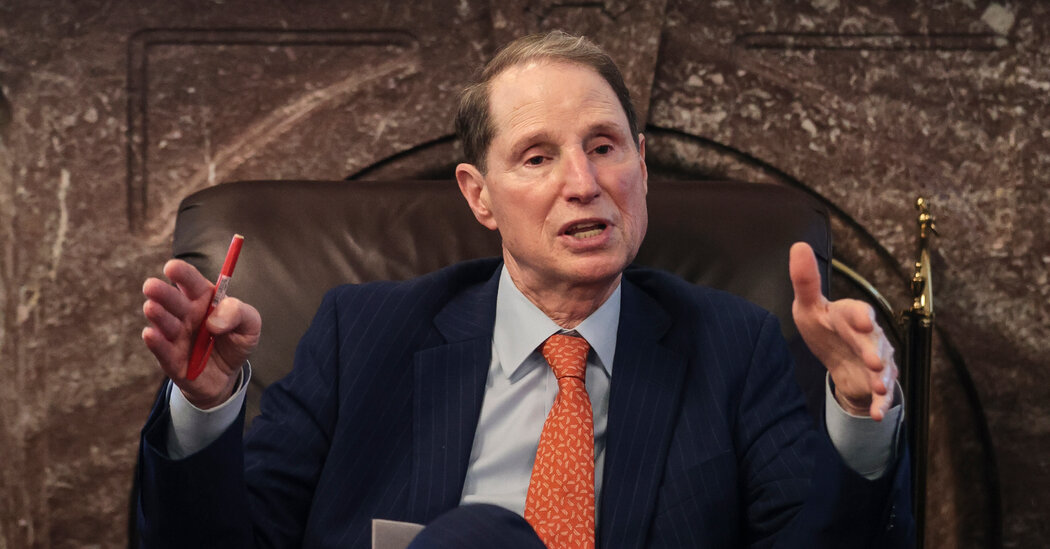 WASHINGTON — ADW Capital Partners would appear to be the kind of hedge fund that Democrats on the Senate Finance Committee would like to tax more heavily: small but growing fast, with $330 million in assets, an address in New York, an incorporation in Delaware but doing business in Florida, and an offshore “feeder” corporation shielding some of its clients from U.S. taxation.

No wonder, then, that its owner, Adam Wyden, has come out as a vocal and vociferous critic of the tax increases being pushed by the committee’s chairman, Senator Ron Wyden of Oregon — his father.

The public dispute between son and father over the elder Mr. Wyden’s dogged efforts to tax the wealth of the superrich and close loopholes that have particularly benefited the richest financiers has accentuated a particular phenomenon that has helped to shield America’s billionaires. Each time Congress weighs taxing them, the merely rich rush to run interference for the fabulously rich.

Adam Wyden, 37, made it clear he does not want to push his familial dispute too far.

“The issue is bigger than my father. I’m not interested in discussing anything personal,” he said in a brief phone call before declining to go further. He said he was “not a Trumper” and “not an Ocasio” — referring to Representative Alexandria Ocasio-Cortez of New York, an icon of the Democratic left. He is a libertarian, he said, raised in Washington, D.C., who moved to Florida “to get away from the food fight.”

But he has gone public with his grievances against his father’s proposals, in an appearance last month on CNBC that he recommended for viewing, and in a tweet responding to the elder Mr. Wyden’s assertion that Elon Musk and other billionaires should not get to decide whether to pay taxes based on a Twitter poll.

“Why does he hate us / the American dream so much?!?!?!?!” Adam Wyden said in the Twitter post last month. “Reality is: most legislators have never built anything … so I guess it’s easier to mindlessly and haphazardly try and tear stuff down.”

His father would like to avoid the subject all together.

“He doesn’t talk to me about his business, and I don’t talk to him about mine,” Senator Wyden, 72, said in an interview on Wednesday.

But as President Biden’s $2.2 trillion social safety net and climate change bill has languished in the Senate, Mr. Wyden has kept alive the proposals his son has spoken out against. One would tax the annual wealth gains of about 700 American billionaires, some of whom were shown in a series of ProPublica reports to have paid a tiny fraction of their wealth in taxes, while some paid no income taxes at all. The proposal would raise $557 billion over 10 years and turn the Build Back Better Act into a bona fide deficit reducer.

Another would change the rules that business partnerships have used to avoid taxation and evade Internal Revenue Service audits. Still another would close the so-called carried-interest loophole, which allows some hedge fund and private equity managers to claim the fees they charge clients as capital gains, not income — and pay much lower tax rates.

Monte A. Jackel, an expert on the taxation of partnerships and a counsel at the tax practice Leo Berwick, said Adam Wyden would undoubtedly pay higher taxes under some of his father’s proposals. The senator’s efforts to close the carried-interest loophole would mean income on which his son now pays a 20 percent tax rate would instead be taxed annually as high as 37 percent.

Efforts to shut down offshore partnerships could hurt the younger Mr. Wyden indirectly, by costing him some clients, Mr. Jackel said. He pointed to the structure of Mr. Wyden’s fund, which includes a “master fund” partnership in the United States and an “offshore feeder” foreign corporation, which allows tax-exempt and foreign investors to avoid U.S. taxation.

But Adam Wyden is hardly one of the big whales that most Senate Democrats are eyeing to pay for their spending. With three employees, a little more than 150 investors and $329 million in assets under management, ADW Capital Partners is successful but no titan. Citadel Advisors, a large hedge fund, has $235 billion in assets and more than 2,000 employees.

“At a maximum,” Adam Wyden might have $12 million in adjusted gross income, said Steven N. Kaplan, a finance professor at the University of Chicago’s Booth School of Business.

He would in no way be hit by his father’s wealth tax, which would be levied only on people with $1 billion in assets or $100 million or more in income over three consecutive years. He might be affected by a provision in the House-passed version of the social policy bill, which would impose a 5 percent surtax on income over $10 million. But his father has said he would much rather hit billionaires than millionaires, and has complained that the House plan taxes N.B.A. players while letting team owners off the hook.

Yet Adam Wyden burst into view by defending one of his father’s real targets, Mr. Musk, after the Tesla founder asked Twitter followers whether he should sell shares of the company and pay taxes on them, and then insulted Senator Wyden with what appeared to be a vulgar slight.

“Thankfully, I think I can compound” investment gains “faster than my dad and his cronies can confiscate it,” Adam Wyden wrote.

Lauded on CNBC’s “Squawk Box,” he elaborated on air. “Amazon, Netflix, Google, Tesla: I mean, we are the envy of the rest of the world,” he said. “People come to this country to build amazing businesses, and I want that to continue.”

Without referring to his son, the elder Mr. Wyden suggested a possible reason for his stance: “Many millionaires perhaps may consider themselves tomorrow’s billionaires.”

Dennis Kelleher, who heads Better Markets, a group that works against income inequality, said the marshaling of little guys to protect the big guys “happens all the time.” Small-business owners protest estate taxes they will never pay. Community banks protest regulations aimed at the large banks that are their biggest competitors. Minimum-wage workers are somehow framed as the targets for I.R.S. enforcement proposals aimed at the ultrarich.

“Not only does it distort discussion of incredibly important policy,” he said, “it ends up advancing the interest of this very small number of people and industries that have a chokehold on public policy in Washington.”

Adam Wyden is a reluctant rebel. He said he had “no interest in engaging in a Wyden-versus-Wyden” story, and was more interested in talking about his Jewish grandfather cheating on his medical exam to win the chance to invade Normandy on D-Day and become a decorated war hero.

He is hardly the only wealthy person sticking up for the fantastically rich. The billionaire class has long leaned on farmers and ranchers to beat back efforts to tax inheritances more heavily. This year, the tactic worked to kill a proposal from Mr. Biden that would have set the value of inherited assets at their original purchase price, not their worth at the time of the original owner’s death.

That “step up” in the value of an inherited asset means that its unrealized gains over a lifetime are often never taxed, a boon to wealthy heirs, protected in Washington by those considered politically untouchable. That includes family farmers, who are actually unlikely to be affected given the Democratic proposals include protections for farms, ranches and small businesses.

Two former Democratic senators from rural states, Max Baucus of Montana and Heidi Heitkamp of North Dakota, lobbied against the Biden proposal and quickly won over Senator Jon Tester, the current Democrat from Montana, who killed it in October in the name of “our family farms, ranches and small businesses.”

Senator Wyden insists he is not giving up.

“Next year when people are sorting this out, after hearing over and over that billionaires are paying little or nothing,” he said, they need to see that has changed. He added, “We’re going to be staying at it.”