Robert Colescott Throws Down the Gauntlet 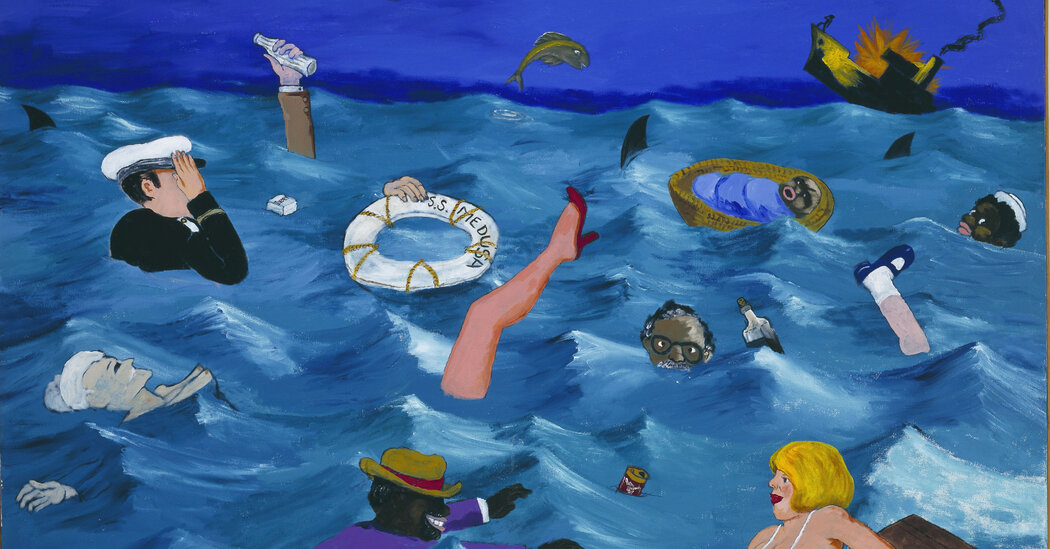 Watch out. A raucous, enthralling exhibition of the great American painter Robert Colescott (1925-2009) has arrived at the New Museum, to revel in and dissect. “Art and Race Matters: The Career of Robert Colescott” is the first museum exhibition of this artist’s relentlessly provocative work to be seen in Manhattan since a 1989 show (also at the New Museum) and the most complete yet. It reveals a man who was eventually able to meld his own private demons about race with his country’s public ones, creating one of the most compelling, simultaneously personal and socially relevant bodies of work in 20th century American painting.

Taut and carefully shaped, the show traces Colescott’s heroic trajectory from start to finish, a nervy mixture of abstraction and trompe l’oeil during his undergraduate years to a sardonic humanism that is both indicting and optimistic.

As a light-skinned Black American who was raised to pass for white — wanting, he would later say, “to belong to the wrong club” — Colescott did not embrace his Blackness artistically until the mid-1960s, at age 40.

After 1968, he made very few paintings that did not refer to race and racism in ways that startled, seduced, elucidated, amused and horrified. Adopting a burlesque expressionism, he trafficked in stereotypes and caricature of both Blacks and whites, often reformulating Western masterpieces with nonwhite subjects. They were antic and savagely satirical. In them, race was first among equal subjects that included gender, American history, sex, religion, consumerism and jazz, as well as large doses of popular culture — that is, advertising, literature, movies, comestibles and their mascots, like Colonel Sanders.

His points were pushed forward by his searing palette (hot pink, magenta and a vibrant cerulean blue) and vigorous brushwork, at once masterly and sloppy. In 1990, he wrote of making “big sensuous paintings. It’s the first impact that people get. They walk in and say, ‘Oh wow!’ And then, ‘Oh [expletive]’ when they see what they have to deal with in subject matter. It’s an integrated ‘one-two’ punch; it gets them every time.”

Perhaps most significantly, Colescott contributed to the resurgence of figurative painting that began in the 1970s and continues to this day, especially among Black artists. He first gained fame as a serial appropriator during the mid 1970s — ahead of the Pictures Generation artists and the Neo-Expressionists.

He was born in Oakland, where his parents (who identified as Creole) relocated from New Orleans in 1919, early in the Great Migration. He earned his undergraduate degree at the University of California, Berkeley, in 1949, and after living briefly in Paris and studying with Fernand Léger, returned for his graduate degree. In 1955, he took a job teaching junior high school art in Seattle, moving on to Portland State College in 1957. (He would teach in colleges and universities for most of his life, retiring in 1995). During these years, he sorted around the influences of the Northern California figurative painters — Richard Diebenkorn, David Park, Elmer Bischoff and especially Joan Brown.

Colescott’s racial awakening began with two stints in Cairo, a residency in 1964 and a teaching job in 1966-67. You can see the effect of ancient Egyptian art in the first large painting in this show, “We Await Thee” (1964), in which female nudes seem to emerge from a bank of stone. Their varying skin tones, as well as bodies and faces that are literally split, half black and half white, become frequent in Colescott’s work perhaps reflecting his tensions around racial identity as well as the nation’s as a whole.

Next, Colescott laid claim to the saturated colors of the Black figurative painter Bob Thompson in his “Nubian Queen” (1966) and “Dr. Ehrlich’s Magic Bullet” (1968), which seem populated by fiery red ghosts. Colescott carved out a niche for himself in Pop Art with paintings like “Bye, Bye, Miss American Pie” (1971), which features a nude blonde above a Black G.I. with a smoking M16 rifle.

His two most famous paintings, both from 1975, are his simplest appropriations: “Eat Dem Taters,” a blackface sendup of van Gogh’s “The Potato Eaters,” and “George Washington Carver Crossing the Delaware: Page From an American History Textbook,” which transforms Emanuel Leutze’s depiction of George Washington, heading for victory, into a Black achievement, paying homage to one of America’s great educators. (In 2021, the Carver painting sold at auction for $15.3 million to George Lucas for his Lucas Museum of Narrative Art in Los Angeles.)

Of Carver, Colescott observed in 1990, “Subversion of this icon, a quasi-religious image that everyone bows to and believes in — but nobody thinks about — seemed like a good idea, a new life for an old shoe.”

Both works hang in this show’s central gallery, crucial hinges between the artist’s searching early efforts and his magnificent late works. These paintings throw down a gauntlet both to the art world and academia, but are only the beginning. If there is one thing that Colescott did not do, it was stand still.

In 1979, Colescott began moving toward more nuanced forms of appropriation in “Beauty Is in the Eye of the Beholder,” which shows the artist in his studio, painting a copy of Matisse’s “Dance,” but distracted, as if by reality, in the form of a living model who is shedding her clothes.

One of the show’s least-known and greatest early paintings is the 1978 “Wreckage of the Medusa,” which takes us beyond Géricault’s masterpiece, “The Raft of the Medusa,” to the raft’s disintegration at sea — a gorgeous expanse of blue beneath a narrow band of pink and blue sky. Bobbing in the waves are a Black man swimming toward a blond Avon lady, a life preserver, a swaddled baby (Moses?) adrift in a basket, and below, the artist himself near a liquor bottle.

A more expansive humanistic if nonetheless cleareyed view of life takes hold in the last two galleries of the show, with works from the late 1980s and ’90s. Crowded with figures from different eras, cultures and narratives, these paintings become almost operatic. The people push forward and overlap as if Colescott were thinking of Cubism.

These phantasmagoric assemblies are thrilling, tragic and both legible and mysterious. In “School Days” a Black athlete points a handgun at us, and, on the other side, a Black man wounded in the chest. A furious, purple-haired Black woman (white from the midriff down) towers over the action.

Colescott wants us to understand some of what has brought us to this point, as suggested by his series “Knowledge of the Past Is the Key to the Future.” One of these is ‘‘Matthew Henson and the Quest for the North Pole” (1986) which features a Black American explorer, a naked white woman with a Black man’s severed head on a platter — Salome and the martyr John the Baptist; a chained Black Venus and her leering white male keeper; and a Jesus figure whose face is half Black and half white. In the lower left corner of this work — in one of the best painting moments in the show — a portrait of a Native American chief is sketched in, indicating the immensity of white America’s sins.

Colescott, who died in 2009 at 83, never stopped developing. In some of his final paintings, he added different modes of depiction, most effectively figures outlined into combinations of black and magenta. In “Beauty Is Only Skin Deep,” what seems to be an embracing Black couple provides one of the show’s most peaceful, romantic moments. But look closely. The man is covering the woman’s eyes; a cartoonish white face, possibly Betty Boop’s, is confronted by a map of Africa that is also a woman’s head, and a Black man seems to hold his head in white hands. Colescott’s paintings continue to make people nervous, especially in the art world’s coastal enclaves. In 1997, when he became the first Black artist to represent the United States at the Venice Biennale with a solo show, it originated at Site Santa Fe and the University of Arizona Museum of Art, some distance from those enclaves.

Similarly, the current exhibition was organized by the Contemporary Arts Center in Cincinnati, and the independent curator Matthew Weseley, author of a forthcoming monograph on Colescott, and the historian and curator Lowery Stokes Sims, who has been writing on the artist’s work for decades. Along with Raphaela Platow, director and chief curator, of the Cincinnati arts center, the pair has orchestrated a lavish catalog in which we hear from Colescott (an excellent, erudite writer), his family and friends as well as some exceptionally astute professionals.

After traveling to Portland, Ore., Chicago and Sarasota, Fla., the show has come to its final stop at the New Museum, which was not on the original itinerary. It’s embarrassing that one of New York’s major museums was not involved with this endeavor from the start, especially given their avowals to diversify on all fronts after the murder of George Floyd. But luckily for the city, for the ongoing reshaping of American art history and for young artists across the five boroughs, the Colescott show is here, and a debt of gratitude is owed the New Museum.

Art and Race Matters: The Career of Robert Colescott