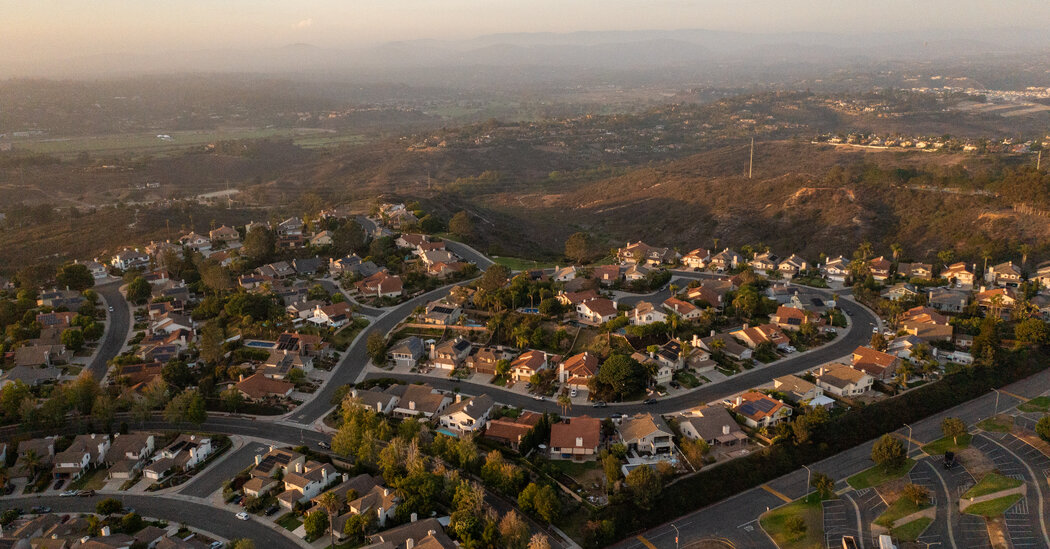 WASHINGTON — A plan by House Democrats to reduce taxes for high earners in states like New Jersey, New York and California in their $1.85 trillion social policy spending package is becoming an early political albatross for the party, with Republicans already mobilizing to accuse Democrats of defying their populist principles in favor of cutting taxes for the rich.

The criticism offers a preview of the emerging battle lines ahead of next year’s midterm elections and underscores the challenge that Democrats face when local politics collide with the party’s national ambitions to promote economic equity. For Republicans who have defended their 2017 tax cuts, which overwhelmingly benefited the wealthy, the proposal by Democrats to raise the limit on the state and local tax deduction is an opportunity to flip the script and cast Democrats as the party of plutocrats.

“I think they’re struggling to maintain their professed support for taxing the wealthy, yet they are providing a huge tax windfall under the SALT cap,” said Representative Kevin Brady of Texas, the top Republican on the House Ways and Means Committee, referring to the acronym for state and local taxes. “If your priorities are working families, make that the priority, not the wealthy.”

Republicans, looking for ways to finance their own tax cuts in 2017, capped the amount of state and local taxes that households could deduct from their federal tax bills at $10,000. Democrats from high-tax states like New York, New Jersey and California have spent years promising to repeal the cap and are poised to lift it to $80,000 through 2030, before reducing it back to $10,000 in 2031. The cap, which is currently set to disappear in 2025, would then expire permanently in 2032.

The House proposal is likely to change in the Senate, where it has its own champions and detractors. Senator Chuck Schumer, Democrat of New York and the majority leader, has embraced a more generous deduction while Senator Bernie Sanders, the Vermont independent who is the chairman of the Senate Budget Committee, has sharply criticized the House proposal. He joined Senator Bob Menendez, Democrat of New Jersey, in negotiating an income cap — as high as $550,000, though that number is in flux — on who can receive the deduction.

This week, the National Republican Congressional Committee released survey data that it said suggested most voters in battleground states would be less likely to vote for Democrats who supported a policy that gave tax cuts to rich homeowners in New Jersey, New York and California. It said that the Democratic Party would have “to defend its politically toxic policies which penalize hard working families to reward liberal elites.”

Prominent tax and budget analysts have argued that expanding the deduction amounted to an unnecessary giveaway to the rich.

According to the nonpartisan Committee for a Responsible Federal Budget, a family of four in Washington making $1 million per year would receive 10 times as much tax relief next year from expanding the state and local tax deduction as a middle-class family would receive from another provision in the social policy package, an expansion of the child tax credit. Citing calculations from the nonpartisan Urban-Brookings Tax Policy Center, the group said that two thirds of households making more than $1 million a year would get a tax cut under the legislation because of the increase to the state and local property tax deduction.

The proposal has put some Democrats on the defensive.

Rep. Jared Golden, Democrat of Maine, said this week that tax giveaways to millionaires sounded like something that Republicans would have come up with.

“Proponents have been saying that the BBB taxes the rich,” Mr. Golden said on Twitter, referring to the bill known as the Build Back Better Act. “But the more we learn about the SALT provisions, the more it looks like another giant tax break for millionaires.”

The issue is further complicating passage of the bill, which Democrats are trying to get through both the House and Senate without Republican support. Given their thin majorities in both chambers, Democrats can afford to lose no more than three votes in the House and none in the Senate.

Some Democrats in Congress from states with high taxes have made the inclusion of the more generous deduction as a prerequisite for their backing the bill.

“There’s a series of competing views on SALT, but I mean, it’s pretty obvious something has to be in there, that’s for sure,” said Representative Richard E. Neal of Massachusetts, the chairman of the House Ways and Means Committee.

The unexpectedly tight race for governor of New Jersey was a clear reminder that the state’s high property taxes — and the limit on their deductibility — are high on voters’ lists of worries, strategists and other political observers said.

“As Covid kind of recedes, taxes are taking its place as the top issue in New Jersey,” said Michael DuHaime, a Republican political strategist with Mercury Public Affairs.

The SALT cap “essentially resulted in a pretty large tax increase for a lot of families” in the suburbs of New York City, Mr. DuHaime said. With Democrats in power, those homeowners are counting on some relief, he said.

Now that former President Donald J. Trump is out of office, New Jersey has “reverted to its mean” of being deeply concerned about the state’s affordability, said Julie Roginsky, a strategist who advised Gov. Philip D. Murphy, a Democrat, during his first campaign in 2017. The average homeowner in the state pays about $10,000 in property taxes, she said, with the cap hitting about one-third of New Jersey residents.

“I think it’s absolutely a line in the sand that some of these vulnerable members of Congress need to draw,” Ms. Roginsky said.

Several Democrats who represent affluent suburban areas where most homeowners pay much more than $10,000 a year in property taxes will face stiff challenges in the midterm election next year, strategists said. Their short list of vulnerable House members include Josh Gottheimer, Mikie Sherrill and Tom Malinowski from North Jersey, and Andy Kim, who represents part of the Jersey Shore, all of whom support raising the SALT cap.

If the Democrats can engineer a change to the SALT deduction that is retroactive to cover 2021 taxes, those incumbents can campaign on having provided a tax cut, Ms. Roginsky said. But if they fail, their Republican opponents — like Thomas Kean Jr., a state senator who is challenging Mr. Malinowksi — will be able to use that against them, she said.

“It may not play well in Vermont or in Alexandria Ocasio-Cortez’s district, but if you’re Nancy Pelosi, you understand that the road to your majority runs through places like suburban New Jersey and suburban California and suburban New York,” Ms. Roginsky said.

Ben Dworkin, the director of the Rowan Institute for Public Policy and Citizenship at Rowan University in Glassboro, N.J., cited the unexpectedly close race for New Jersey governor this year. He noted how effective Mr. Murphy’s challenger, Jack Ciattarelli was in playing to voters’ feelings about the state’s high taxes.

Public polling leading up to that election showed that affordability in general was the “top issue” in the state, he said.

“From an elected official standpoint, anything you can do to alleviate the pressure of taxes, as a change in the SALT cap would do, is a huge benefit,” Mr. Dworkin said.

Even one of the leading Republicans in the state, Jon M. Bramnick, the minority leader in the State Assembly, said he would applaud the Democrats if they provided some tax relief to New Jersey residents.

“If Gottheimer and Mikie Sherrill and the others stand up to the Republicans and get it done, I’ll say I’m with them and I’m proud of their work,” Mr. Bramnick said.

Mr. Gottheimer said in an interview that people had been migrating away from New Jersey because the cap on the deduction meant an increase in the cost of living. He dismissed criticism that lifting the cap was a tax cut for the rich, arguing that was not the case in his state.

“My job is to fight for my district, and again if other states or districts don’t want it they don’t have to take it,” Mr. Gottheimer said. “If you come to my state, this is an existential threat.”

Yet the overall economic impact of the cap in high-tax states is not as clear as those who support raising it suggest.

Daniel Hemel, a law professor at the University of Chicago whose research has focused on taxes, argued that under the current proposal, millionaires would actually face higher taxes than they otherwise would have in the second half of the decade.

And while he said liberals should be concerned that the law would mean some rich people would get big tax breaks, he argued Republicans were being disingenuous in their attacks given the structure of their $1.5 trillion tax cut four years ago.

“I think any Republican who voted for the 2017 tax law loses the ability to criticize liberals for regressive tax policy,” Mr. Hemel said.