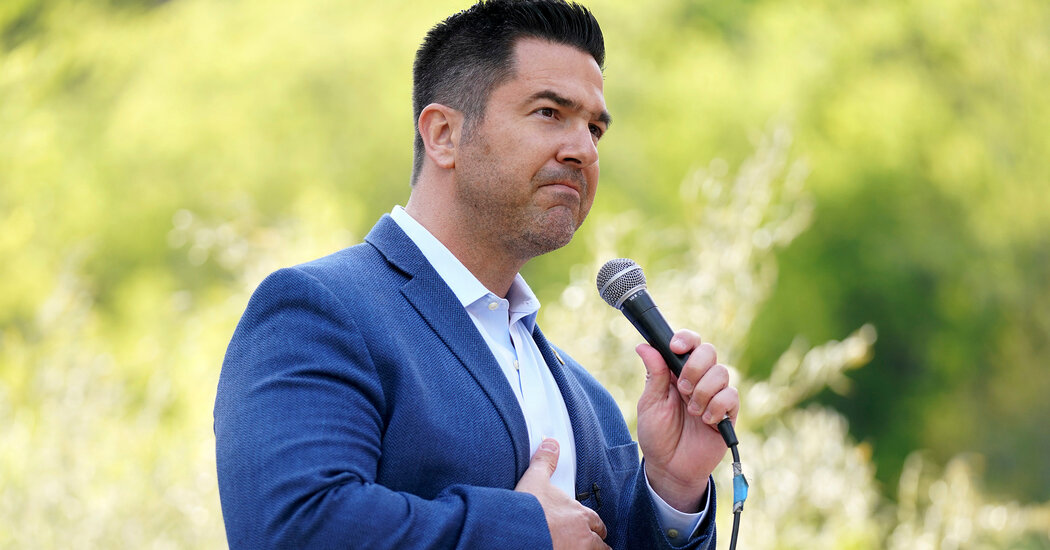 Sean Parnell, a leading Republican candidate for Senate in Pennsylvania, suspended his campaign on Monday after a judge ruled that his estranged wife should get primary custody of their three children in a case in which she accused him of spousal and child abuse.

Mr. Parnell, who was endorsed by former President Donald J. Trump, said he was “devastated” by the decision and planned to appeal.

“There is nothing more important to me than my children, and while I plan to ask the court to reconsider, I can’t continue with a Senate campaign,” he said in a statement. “My focus right now is 100 percent on my children, and I want them to know I do not have any other priorities and will never stop fighting for them.”

Mr. Parnell’s wife, Laurie Snell, testified in court this month that Mr. Parnell had repeatedly abused her and their children, choking her and hitting one of their children so hard that he left a welt on the child’s back. In a ruling last week that was made public on Monday, a Butler County judge wrote that he had found Ms. Snell to be “the more credible witness” and that he believed Mr. Parnell had committed “some acts of abuse in the past.”

The Pennsylvania seat, currently held by Senator Pat Toomey, a Republican, is widely considered one of the most competitive Senate races in 2022. Several Democrats have announced their plans to run for the seat, including Conor Lamb, a congressman from outside Pittsburgh, and John Fetterman, the current lieutenant governor.

Mr. Parnell, a former Army Ranger who received the Purple Heart after serving in Afghanistan, had been seen as a top Republican candidate, particularly after Mr. Trump endorsed him in September.

But Mr. Parnell’s family history illustrated the concerns among some Republican leaders about the candidates that Mr. Trump has been supporting in G.O.P. primaries for close midterm races.

Mr. Parnell narrowly lost a congressional bid in 2020, and one of his Republican rivals in the Senate race, Jeff Bartos, had attacked him over temporary protective orders he received in 2017 and 2018.

Yet some Senate candidates backed by Mr. Trump have remained viable despite questions about their pasts: In Georgia, Herschel Walker, the former football star, is seen as a leading contender to challenge Senator Raphael Warnock, a Democrat, despite facing repeated accusations of threatening his ex-wife.

In the testimony by Mr. Parnell’s wife this month, she said that he once punched a closet door so hard that it hit the face of one of their children and left a bruise. At the time, Ms. Snell testified, Mr. Parnell told his child, “It was your fault and get out of here.” At another point, Mr. Parnell forced his wife out of their vehicle and left her on the side of the road, telling her to “go get an abortion,” she said in court.

Mr. Parnell has denied all the allegations. He testified that he had “never raised a hand in anger towards my wife or any of our three children.”

The judge granted Ms. Snell primary physical and sole legal custody of the children, who are between 8 and 12 years old, allowing Mr. Parnell to take them three weekends a month.

“She described many incidents,” Judge James G. Arner wrote in his ruling. “She provided factual details of each incident, including when they happened and what happened. She testified in a convincing manner.”

Mr. Parnell, on the other hand, was “somewhat evasive” and “less believable,” the judge ruled.

“He was dressed very casually for his appearances in court, in blue jeans and untucked plaid shirts, which did not show respect for the seriousness of the occasion,” Judge Arner wrote. “While testifying he looked mainly in the direction of his attorneys and toward members of the news media in the back of the courtroom, rather than at me.”

The judge also wrote that Mr. Parnell’s frequent travel had been a factor in the ruling.