Seeing de Kooning in a New Light, After a Violent Theft 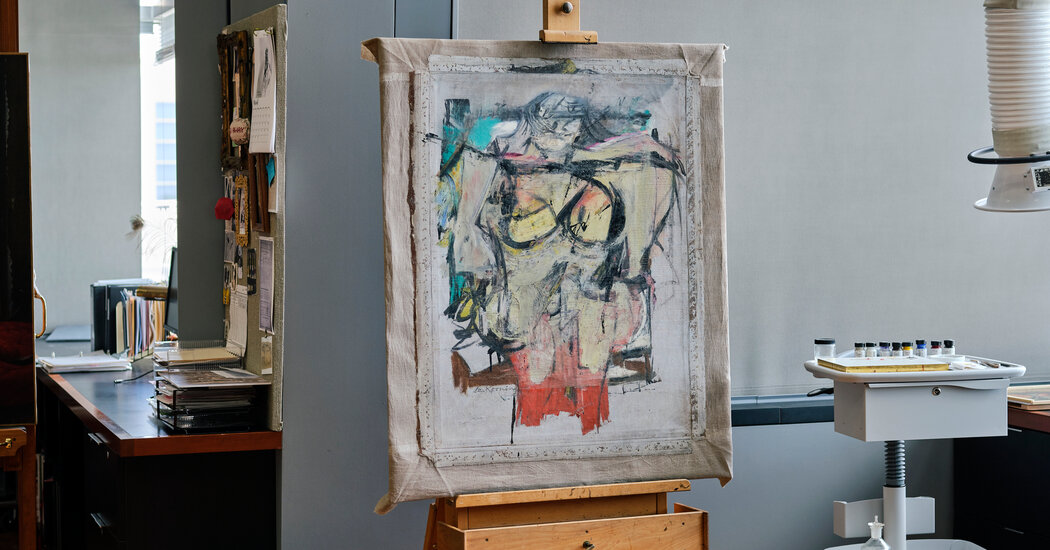 LOS ANGELES — Ulrich Birkmaier’s job as senior paintings conservator at the Getty Museum involves painstakingly repairing aging canvases and removing botched varnishes or restorations so artworks can return in full health to public view. He is by profession pretty much the opposite of an art thief.

But in early March he played the role of one. The clean-cut, Munich-born conservator grabbed a box cutter and began to quickly and violently slice a painting from its frame, starting from the top left. When the canvas wouldn’t come free from its backing, he tugged forcefully, creating a pattern of thin cracks running across the canvas. Within minutes the picture was his.

Birkmaier was re-enacting one of the most brazen art heists in recent memory: the 1985 theft in broad daylight of Willem de Kooning’s 1955 painting “Woman-Ochre” from the University of Arizona Museum of Art. A white, middle-aged couple — the man wore glasses and a mustache, the woman a scarf over her hair — entered the museum right upon opening. She distracted a guard, while he walked upstairs to the painting, and within 10 minutes they fled with the artwork. There were no significant leads in the case until five years ago, when the painting was recovered by antique dealers in New Mexico.

Birkmaier’s re-enactment of the theft was done with a cheap photographic reproduction but it “looked eerily original,” he said, and the process felt fraught. “To go at it with a knife was upsetting. It went against everything we are trained to do.” He did so for the sake of a short video in the new Getty Museum exhibition, “Conserving de Kooning: Theft and Recovery,” which he curated with Tom Learner, the head of science at the Getty Conservation Institute. Sharing the story of the painting’s theft and their two-year conservation process, the exhibition, opening June 7, marks the first public viewing of “Woman-Ochre” in over three decades.

The exhibition also brings the painting one step closer to its homecoming at the University of Arizona Art Museum on Oct. 8. There it will be the centerpiece of a related show, “Restored: The Return of Woman-Ochre,” which also looks at how the painting came to the museum in the first place: as part of a donation by the Baltimore collector Edward Gallagher Jr., in honor of his 13-year-old son, who had died in a boating accident.

But the painting today is not exactly the same one donated by Gallagher in 1958. The theft has left its imprint not only on the surface of the canvas, where some scars are visible despite a meticulous conservation, but on the minds of viewers fascinated by art crimes. The artwork’s return to view raises the question of to what extent visitors will see the painting, with its grotesque — some say sexist — depiction of the female form, in a different light.

“Woman-Ochre” was controversial even before the theft, as part of de Kooning’s influential but polarizing “Woman” series. In the 1950s, after gaining recognition as an abstract painter, the artist caused a stir with six huge “Woman” paintings that are numbered as such, in addition to several smaller canvases like “Woman-Ochre.” With broad, sometimes slashing brushwork, this series stretched the female figure in grotesque ways, giving her features that include gaping eyes, fang-like teeth and enormous, sagging breasts.

The works were seen as misogynistic by some early on, to the point that de Kooning’s wife, Elaine de Kooning, insisted that she was not the inspiration, but rather that his mother was. The artist did not help his cause by telling a writer in 1956, “Women irritate me sometimes. I painted that irritation in the ‘Woman’ series.”

Olivia Miller, the exhibitions curator at the Arizona Museum of Art, acknowledged the artwork’s aggressive content but also argues that it has acquired a new mystique because of the theft. She even discussed it as a “sacred object” when asked to speak in a religious studies class.

“It became so treasured — the museum wanted it back so badly, and so much time was dedicated to looking at this image and thinking about this image,” she said. “And then to have it returned, have so many people rally around it and have the Getty spend years taking care of it, this human element has imbued the painting with new significance.”

Miller still remembers her shock at receiving a phone call, five years ago, from a New Mexico antiques dealer who discovered that the estate-sale painting he had just placed in his shop was in fact “Woman-Ochre.” The dealer, David Van Auker, had bought the canvas as part of the estate of Jerry and Rita Alter, retired schoolteachers who lived nearby with the painting for decades. They had hung it in their bedroom in an odd spot, obscured by the bedroom door whenever it was open.

As shown in the colorful, caper-like new documentary “The Thief Collector,” all signs point to the Alters having stolen the painting for their own private enjoyment, from photographs that place the couple in the area the day before the crime to police sketches that match their features. (According to an FBI agent in the film, the investigation is no longer active.)

The painting’s value has been widely reported to be close to $100 million based on another, larger canvas from the series selling privately for around $135 million, but Miller was not authorized to disclose the university’s insurance valuation. She did say the university has no plans to sell it.

The New York art adviser Allan Schwartzman said that, assuming it were available, a beautifully conserved “Woman-Ochre” “would occupy the top end of the market, because the series is so singular in its significance and examples are so rare,” with almost all held by museums. He said that “a notorious story related to the history of the work of art can make a work particularly appealing in the marketplace,” mentioning Andy Warhol’s “Shot Marilyn” series, some of which were actually pierced by a bullet.

Another example is the Mona Lisa. While regarded as important, the painting did not truly become a household name until after its theft from the Louvre in 1911, when the French police plastered images of it all over the city streets and it made the headlines.

John Elderfield, who curated the last big de Kooning survey for the Museum of Modern Art, said that originally the Woman series upset different people in different ways. While some were dismayed by the vulgar treatment of the female form, friends like Jackson Pollock accused de Kooning of betraying the cause of abstraction by returning to human subjects. Elderfield’s take is that the paintings’ power stems in large part from their particular combination of a classic medium and aggressive subject matter. “He was using thick brushes and broad swaths of oil painting in this way in which Venetian painters have for centuries,” Elderfield said. “He was using traditional techniques to make alarmingly modern paintings, and I think this hybrid quality made people uncomfortable.”

Other art historians continue to wrestle with the series’ subject matter, with a long list of feminist scholars discussing the imagery in terms of violence against women. Complicating the issue, Fionna Barber has argued that each painting’s content is not fixed but shifts with different spectators, while Marlene Clark recently published a book, “The Woman in Me,” exploring the Woman portraits as self-portraits.

The Getty exhibition does not address the persisting question of whether “Woman-Ochre” is sexist. “I can see how the painting would have been shocking and maybe still is,” Birkmaier said. “But that is well beyond the focus of our exhibition, tracing the material history of this particular painting.” He and Learner are its curators, he adds, “but we are not art historians.”

Their goal in the conservation, Learner said, was “returning the painting to the walls, where people could enjoy it as a de Kooning.” Birkmaier added: “We did the minimum needed to return the painting to a stage where you can read it properly without noticing damage first.”

A major stage involved stabilizing the surface of the canvas where, as a result of the damage by the thieves, paint was flaking off or displaced. A conservator, Laura Rivers, worked to re-adhere paint flakes in the right place, one at a time, with the use of “gentle heat and tiny dental tools,” Birkmaier said. She then removed two layers of varnish, one from a 1974 treatment by MoMA and the other presumably by the thieves, to bring the painting closer to what it looked like leaving de Kooning’s studio. At that point Birkmaier reattached the painting to the canvas borders left behind when it was sliced off and gave it a new backing.

At the very end, Birkmaier himself “inpainted” a number of cracks so they are less visible. He also addressed a few spots where the thieves had added their own paint — “amateurish restoration attempts,” he said — by removing what he could excise safely and painting over other areas.

The painting still has some visible scars if you look closely enough. Around the edges of the canvas you can see slight dimples made by the thieves when stapling their cutout canvas over a new stretcher bar. You can detect some unevenness close to the frame where the slicing took place. And, if you know where to look, you can probably make out a few of the tears that were repaired, like one beneath the artist’s signature. (The signature is so prominent it’s hard to imagine a couple living with the de Kooning for decades and not noticing it.)

But as Learner pointed out, for all the damage “Woman-Ochre” suffered, there isn’t one big tear that would distract viewers. What’s more, he added, “There’s so much action in the painting, which works to our advantage.”

In this way it’s likely that for most viewers, especially from a distance, any damage still visible after all the Getty work will blend into the artist’s furious brushstrokes. And maybe in this strange way the violence of the theft and the violence of de Kooning’s imagery will now work together, woven into the very fabric of this newly conserved painting.