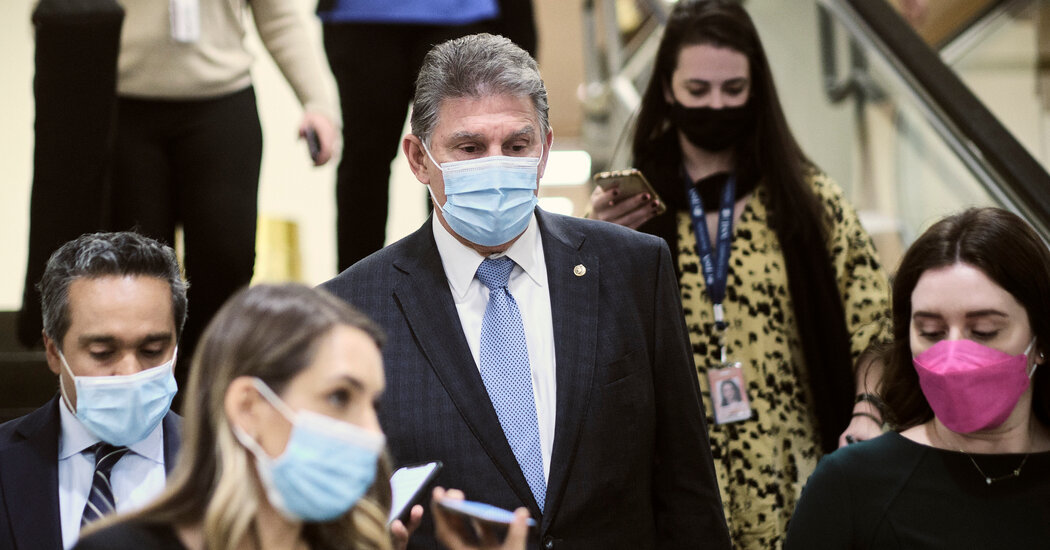 WASHINGTON — The Senate on Wednesday voted narrowly to roll back President Biden’s vaccine and testing mandate for large employers, taking mostly symbolic action as Republicans escalate their protest of the administration’s push to immunize Americans against a deadly pandemic.

The vote was bipartisan, as two centrist Democrats — Senators Joe Manchin III of West Virginia and Jon Tester of Montana — joined all 50 Republicans in voting to overturn the regulation, which has already been blocked amid a wave of litigation by large employers and Republican-controlled states. But the House is not expected to take up the measure, and administration officials said Mr. Biden would veto it should it reach his desk.

For Republicans who forced the action, it was a prime opportunity to paint the administration’s efforts to increase coronavirus vaccinations as federal overreach, a central component of their campaign message going into the midterm elections next year. It was also an unusual successful vote for the minority party.

“The federal government, elites in Washington, cannot micromanage citizens’ personal choices without a legitimate basis in the law and the Constitution,” said Senator Mitch McConnell of Kentucky, the minority leader and a polio survivor who has been an outspoken proponent of coronavirus vaccines. “And that goes double for presidents going far beyond the bounds of their office and their authority.”

The vaccines have proved to be safe and effective in stemming the spread of the coronavirus. Laboratory experiments also indicated that a booster shot of the Pfizer-BioNTech vaccine might provide some protection against the Omicron variant, according to a study published online on Tuesday.

The legislative action is likely to further politicize the pandemic response, particularly as Republican leaders have struggled to quell vaccine misinformation and skepticism in their ranks and draw a distinction between opposing the mandates rather than the vaccines. Republicans, who conceded that they would not be successful in overturning the rule without veto-proof majorities, said they would weaponize the mandate as further evidence of the Biden administration’s heavy-handed approach to governance and continue to push for action.

“If you keep plowing forward with it, and with everything that’s been done to say that ‘Hey, this is falling flat across the country,’ that’s his liability,” said Senator Mike Braun, Republican of Indiana, who spearheaded the effort. “I think it’s just another bad subject that he’s been doctrinaire about and not flexible.”

The concern from centrist Democrats signaled that some in the president’s party are wary of fully embracing the mandates beyond those for federal workers and members of the military. Mr. Tester and Mr. Manchin both cited concerns from businesses in their states about the ability to retain workers should the regulation prevail over continuing court challenges.

“What it says is, it was put forth with all the best of intentions, but it’s putting some businesses in a bind,” Mr. Tester said before the vote, adding that he was supportive of vaccines as well as federal mandates for health care workers and military personnel. “It’s about certainty for businesses moving forward.”

With the two Democrats in support, the vote was 52-48 to pass the bill.

The administration previously announced a series of vaccine mandates for health care workers and military personnel; in November, it said that a vaccine and testing mandate would go into effect in January for the private sector. But a federal appeals court kept in place a block on the private-sector requirement. In issuing the rule, the court declared, the Occupational Safety and Health Administration had overstepped its authority.

While some companies welcomed the OSHA requirement as a way to move forward, others have resisted, citing concerns about exacerbating a challenging labor shortage. Some of the largest private employers, including Walmart and JPMorgan Chase, have yet to outline a broad mandate for all employees.

A recent poll of 543 companies by the consulting firm Willis Towers Watson found that 57 percent either require or plan to require Covid-19 vaccinations. That includes 32 percent that plan to mandate vaccines only if the OSHA rule takes effect. Seven percent said they planned to impose regulations regardless of the outcome.

Republicans last week threatened to block a government funding bill over the mandates, which would have led to a shutdown. But they failed to win any Democratic support for a proposal that would have barred funding for carrying out any mandates.

In this instance, Republicans used a once-obscure law, known as the Congressional Review Act, to counter the imposition of the mandate. The law gives Congress the ability to overturn a regulation with a simple majority in both chambers, and it cannot be filibustered in the Senate.

At a news conference on Wednesday, Republican proponents said that while they were vaccinated and wanted their constituents to be as well, the bid to overturn the rule was a referendum on federal overreach and proof of their willingness to fight for the people they represent.

“Encouraging and requiring are two different things,” said Senator Shelley Moore Capito, Republican of West Virginia. She charged that the mandate was “killing the American spirit of being able to make decisions about yourself.”

A majority of Democrats denounced the Republican effort as one to undercut the inoculation of Americans. Senator Elizabeth Warren, Democrat of Massachusetts, said that “taking tools out of the toolbox is just plain dumb.”

“There should be one message and one message only coming from this chamber to the American people,” said Senator Chuck Schumer of New York, the majority leader. “Get vaccinated, get boosted, and stay safe yourself — keep your families, your communities and our country safe.”