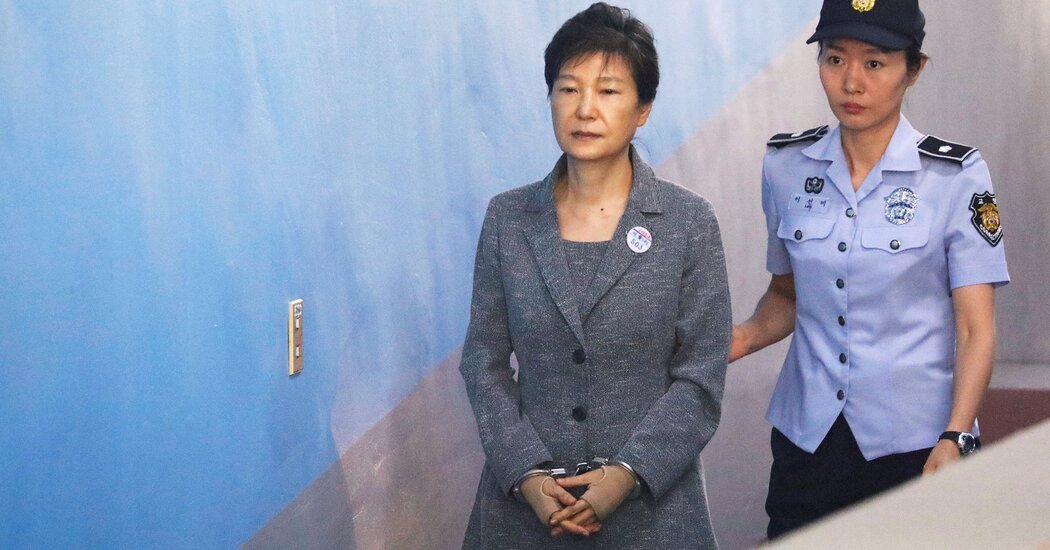 SEOUL, South Korea — The government of President Moon Jae-in said on Friday that it would pardon former President Park Geun-hye, who is serving a 20-year prison term after she was convicted on bribery and other criminal charges.

Ms. Park, 69, who became the first democratically elected South Korean leader to be removed from office through parliamentary impeachment, will be freed on Dec. 31 to promote “reconciliation and consolidate national power to help overcome the national crisis caused by the Covid-19 pandemic,” the Justice Ministry said in a statement.

She has served four years and nine months of her sentence so far. Concerns about her health were raised after she was taken to a hospital in Seoul, the capital, for various illnesses last month.

Whether Ms. Park deserved a pardon has become a divisive political issue ahead of the presidential election in March. The office of Mr. Moon, who by law cannot run for re-election, had sounded noncommittal until now when reporters asked about the prospects of releasing Ms. Park.

Mr. Moon said that Ms. Park’s declining heath had also been a factor in his government’s decision to release her.

“It’s time for us to put our resources together and stride toward the future,” he said in a statement, calling for national unity to help overcome “the numerous difficulties facing the nation.” He added, “I hope this amnesty will help overcome differences in opinion and open a new era of consolidation and harmony.”

Ms. Park thanked Mr. Moon and his government for her pardon and once again apologized to the people for her scandal, her lawyer, Yoo Young-ha, said on Friday after meeting Ms. Park in the hospital.

Ms. Park was pardoned under a broad amnesty that benefited 700 other prisoners, whose remaining prison terms will be eradicated or cut in half. The South Korean president has the power to grant amnesty to prisoners under the Constitution, and has often exercised it to mark major national holidays or the beginning of a new year.

Ms. Park, a daughter of the former military dictator Park Chung-hee, was in her fourth year in power in 2016 when hundreds of thousands of protesters began months of weekly rallies in central Seoul demanding that she be forced from office for corruption and incompetence.

That December, the National Assembly impeached her on charges of bribery and abuse of presidential power in a case that exposed deep collusive ties between powerful politicians and the huge family-controlled conglomerates in South Korea known as chaebol.

In March 2017, Ms. Park was ousted from office after the Constitutional Court upheld the lawmakers’ decision to impeach her. Shortly afterward, she was arrested on multiple criminal charges. In an initial ruling in April 2018, she was sentenced to 24 years in prison.

In January this year, the Supreme Court approved a reduced 20-year prison term for Ms. Park and ordered her to pay 18 billion won ($15 million) in fines, saying that she and her longtime friend and confidante Choi Soon-sil had collected or demanded $19.3 million in bribes from three big businesses, including $7 million from Samsung, South Korea’s largest and most lucrative business group.

The courts ruled that Samsung had offered bribes to Ms. Park and her friend to help win government support for an attempt by the company’s vice chairman, Lee Jae-yong, to inherit management control from his father, Lee Kun-hee, Samsung’s chairman, who died last year.

The younger Mr. Lee, who was sentenced to two and a half years in prison in the corruption scandal, was released on parole in August, when South Korea freed hundreds of prisoners to mark the Aug. 15 National Liberation Day, which commemorates the end of Japanese colonial rule of South Korea at the end of World War II.

Despite her conviction, Ms. Park still had a sizable following of die-hard supporters, mostly older conservative South Koreans, who have held rallies in downtown Seoul calling her innocent and demanding her release.

Those who have argued for her pardon have compared her case to those of the former military dictators Chun Doo-hwan and Roh Tae-woo. After they left office, Mr. Chun was sentenced to life and Mr. Roh got 17 years in prison on sedition and mutiny charges. The charges stemmed from their roles in a 1979 military coup that brought Mr. Chun to power and in the massacre of demonstrators in the southwestern city of Gwangju the following year. Both Mr. Chun and Mr. Roh were pardoned in 1997 after serving two years.

Lee Jae-myung, who is running in the presidential election in March as the candidate of Mr. Moon’s Democratic Party, has opposed Ms. Park’s early release, saying that she has not been repentant enough for the crimes she committed.

Another former president, Lee Myung-bak, is serving a 17-year prison term on bribery and embezzlement charges. But Mr. Lee was not included in the amnesty announced on Friday. Yoon Suk-yeol, the presidential candidate for the conservative opposition People Power Party, had said he would consider pardoning both Ms. Park and Mr. Lee if he were elected.

Mr. Moon’s government granted a special amnesty to former Prime Minister Han Myeong-sook, one of the president’s former political allies. Ms. Han was sentenced to two years in prison in 2015 on charges of collecting illegal political donations. She finished her term in 2017. On Friday, the government said her civil rights, like the right to vote and run for office, will be restored.

The government also released Lee Seok-ki, a progressive politician, on parole on Friday. He was arrested by Ms. Park’s government in 2013 on charges of conspiring to start an armed revolt to overthrow the Seoul government in the event of war with North Korea. He has served all but nine months of his nine-year sentence.

Mr. Lee was the first South Korean lawmaker to be convicted on charges of plotting treason since the country’s past military dictators used such charges to silence dissidents decades ago. Progressive South Koreans had demanded his release, calling him a victim of what they saw as a political witch hunt by Ms. Park to repress her political enemies.