Steelers Hire Brian Flores as an Assistant Amid His N.F.L. Lawsuit 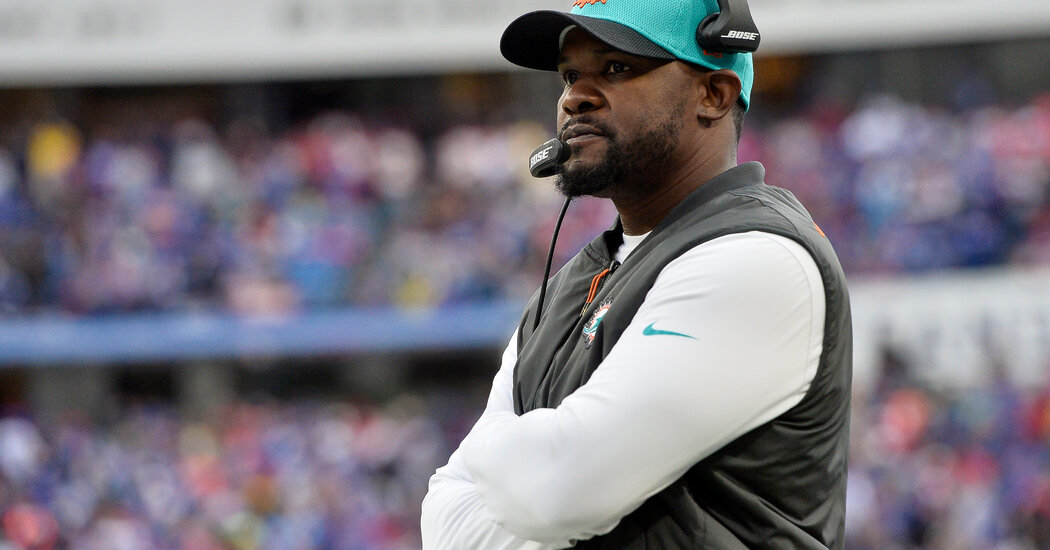 The Giants called Flores’s claims “disturbing and simply false,” saying they had “concrete and objective evidence” that the team’s decision was not made until the day after Flores was interviewed.

Flores also said in his lawsuit that he sat for a “sham interview” with the Broncos in 2019, a claim the Broncos said was “blatantly false.” Further, he alleged that Stephen Ross, the Dolphins owner, pressured him to lose games during the 2019 season to secure a higher draft pick, going so far as to offer him $100,000 for each loss. Ross called his claims “false, malicious and defamatory.”

A wave of scrutiny. The most popular sports league in America is facing criticism and legal issues on several fronts, ranging from discrimination to athletes’ injuries. Here’s a look at some of the recent controversies confronting the N.F.L., its executives and teams:

A demoralizing culture for women. After the 2014 Ray Rice scandal, the N.F.L. stepped up its efforts to hire and promote women. But more than 30 former staff members interviewed by The Times described a stifling corporate culture that has left many women feeling pushed aside.

Sexual harassment claims. Daniel Snyder, the owner of the Washington Commanders, is the subject of an N.F.L. inquiry after sexual harassment allegations were made against him by former employees. In July, the league fined the franchise $10 million after an investigation into allegations of harassment in the team’s front office.

Four days after the league’s initial statement that called Flores’s lawsuit meritless, Commissioner Roger Goodell sent a memo to all 32 teams pledging that it would not wait for a resolution to the lawsuit to re-evaluate and reassess its diversity, equity and inclusion policies. Goodell also said the N.F.L. would “thoroughly and independently” review Flores’s claims that Ross asked him to lose games.

The N.F.L., a league in which about 60 percent of the players are Black, currently has three Black head coaches: Tomlin, Mike McDaniel of the Dolphins, who is multiracial, and Lovie Smith of the Texans. The N.F.L.’s Rooney Rule, which was implemented in 2003 to require teams to interview nonwhite and/or female candidates for head coaching and senior executive positions, was named after Dan Rooney, whose family founded and owns the Steelers. Flores wrote in his lawsuit that while the provision may have been well-intentioned, “what is clear is that the Rooney Rule is not working.”

Flores played linebacker and safety at Boston College, and one of the roles he held during his 11-year tenure with the New England Patriots was coaching the linebackers, while he also ascended to defensive play-caller.

In Pittsburgh, he will work alongside Teryl Austin, who replaced Keith Butler as the team’s defensive coordinator earlier this month. Austin was one of the Black coaches Flores referred to in his lawsuit, describing Austin as a longtime assistant who was “never given a chance” to be a head coach.

Earlier this month, Austin’s agent, Eric Metz, told The Associated Press that Austin had been given a sham interview with the Lions in 2018 to satisfy the Rooney Rule as the team sought to fill its head coach opening, which eventually went to Matt Patricia.