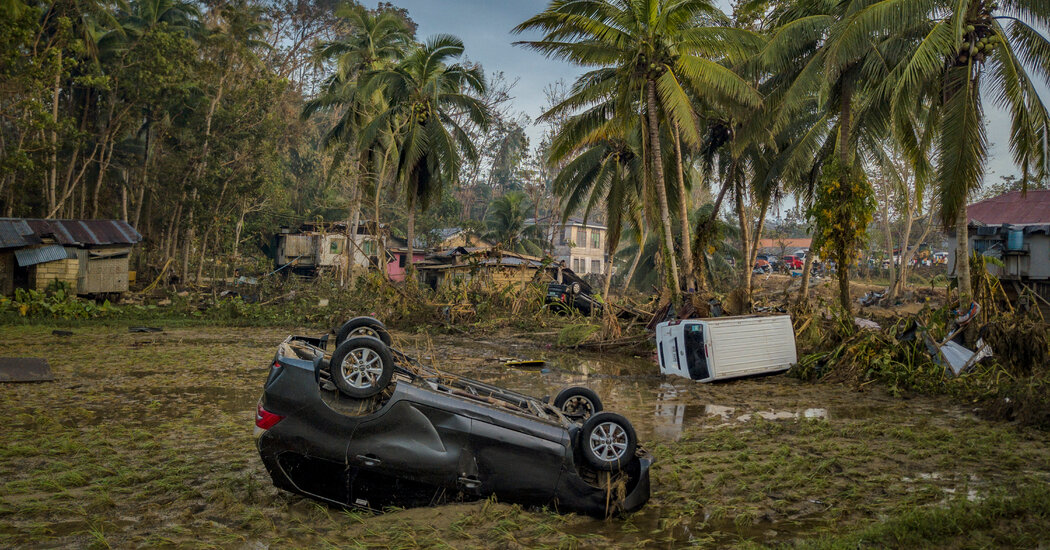 Ed Boysillo, 54, a municipal worker in Ubay, in the central Philippine province of Bohol, was describing the fearsome power of Super Typhoon Rai. The storm made its first landfall on Dec. 16, bringing torrential rains and packing winds up to 168 miles per hour, comparable to a Category 5 hurricane.

It blew away buildings, swelled rivers to overflow and forced more than seven million people to flee their homes. It cut off power, water and communications. It damaged critical infrastructure.

As of Monday morning, the storm had killed 389 people, injured 1,146 others and left 65 missing, official figures show. More than half a million people were still in evacuation centers or staying with friends and relatives.

The smell of death hung in the air in Bohol, where a family emerged from the wreckage to try to salvage a door festooned with Christmas decorations. An inflatable Santa Claus that had survived the lashing winds swayed forlornly in the air, its affable face a striking contrast to the destruction.

“My wife decided that we should evacuate, so we decided to shelter in the bodega we used to store rice,” he said. “But as soon as we entered, the bodega collapsed on us,” he said.

“This is a very sad Christmas,” Mr. Ramos said. “We had to bury them immediately because the funeral parlor could not get to the bodega because of the debris that was still on the roads.”

Rai, the international name for the storm (the local name is Odette), was the 15th typhoon to hit the country this year. The storm made eight more landfalls in multiple regions before veering away.

The Philippines sits on a typhoon belt and typically gets by about 20 storms a year. After Rai’s devastation, the country’s Climate Change Commission called for urgent action at the local level “to build community resilience against extreme climate-related events and minimize loss and damage.”

“As the level of global warming continues to increase,” it said in a statement last week, “these extreme weather events and other climate impacts are becoming severe, and may be irreversible, threatening to further set back our growth as a nation.”

In Bohol, where many of the storm deaths were recorded, overturned vehicles were piled up on the side of the highway and in fields on Monday. Countless trees and debris littered the terrain. Many of the deaths had occurred in coastal areas inundated by storm surges or where people had been crushed by houses that crumbled in the wind. Everywhere, people could be seen scouring the ruins of homes to salvage what was left of their old lives.

On a highway leading to Ubay, near a bay in Bohol, survivors of the storm had scrawled, “Help us,” a desperate plea to passing helicopters and airplanes.

Officials warned that residents in remote areas were running out of food. Countries such as the United States, Canada, China and South Korea have pledged aid. A United Nations agency called for $107.2 million “to support the government in responding to the most urgent humanitarian needs for the next six months.”

Bohol’s governor, Arthur Yap, has sought donations to purchase food and other relief items. An early appeal brought in generators, but fuel is now a coveted commodity.

“Many bought generators, and that tripled the demand for gasoline,” Mr. Yap told reporters on Friday. “That’s the reason why we have long queues at the gasoline stations.”

Ananisa Guinanas, 27, went to get gasoline on Friday in Ubay with her 3-year-old daughter. Police officers were guarding the site.

“We have been lining up for the past seven hours,” she said. “I brought my daughter because I couldn’t leave her. Our house was destroyed. We desperately need gasoline for the motorcycle we would use to look for water.”

After the storm, the Loboc River turned brown from mud and debris.

Nilo Rivera, 34, said his and his mother-in-law’s houses were quickly swept away by the river’s rampaging waters once the storm hit.

“The water reached up to the second floor of our homes,” he said, pointing to a water line beside a structure left standing after the muddy water subsided.

They were now living in a makeshift tent.

Bohol is no stranger to calamities. A powerful quake destroyed one of its churches in October 2013 and severely damaged infrastructure. Casualties were low because the temblor had struck on a holiday.

A month later, Super Typhoon Haiyan, the most powerful storm to make landfall in the country’s recorded history, devastated huge swaths of the Philippines.

Frederic Soupart, the owner of the Fox and the Firefly resort in Bohol, says he believes that Rai was worse than Haiyan. Rai left destruction everywhere as it exited through the Palawan Islands, in the western Philippines. Parts of his resort were buried in waist-deep muck.

“I’ve never seen any flooding like this,” he said, estimating that damage from the storm would cost millions of Philippine pesos to repair. His resort is next to the Loboc River, and he and his staff had to shovel mud from the property.

“It doesn’t feel like Christmas,” Mr. Soupart said. “I was buying stuff at the hardware store, and the Christmas songs annoyed me.”

Cleanup operations have been slow, although the Philippine military had deployed engineering crews to help rebuild. Electricity and telecommunications had yet to be restored in Bohol and in many other areas.

In Siargao, a surfing destination on the northeastern tip of Mindanao Island, east of Bohol, no structure was left standing or spared damage.

The government evacuated dozens of foreign tourists and Filipinos on a military plane. But some chose to stay behind to help rebuild.

Vice President Leni Robredo, who was among the first national officials to reach devastated sites, said on Friday in a Christmas message, “Hope is found in togetherness.”

Many Filipinos sought comfort in the church. Priests appealed for calm as the national government scrambled to get aid to residents. Worshipers in Bohol used flashlights and candles to hold Mass at dawn.

Donn De Lima, 44, was among dozens from the Santo Niño Parish in Ubay who attended Mass on Christmas Eve. It was raining hard, and the roof of the church leaked.

“This Christmas is sad because my home was heavily damaged,” he said. After Mass, his family planned to share a simple meal under a rechargeable flashlight.

Others were not as lucky.

Alicia Nemenzo, 48, and her daughter Mavel Nemenzo, 21, spent Christmas Eve sheltering in a tiny roadside store after the storm wrecked their home. Their only source of light was a flickering candle.

“When it rains now, we get frightened,” she said. “I think we all were traumatized by this typhoon.”

Jason Gutierrez reported from Manila and Ezra Acayan from Bohol Province, the Philippines.