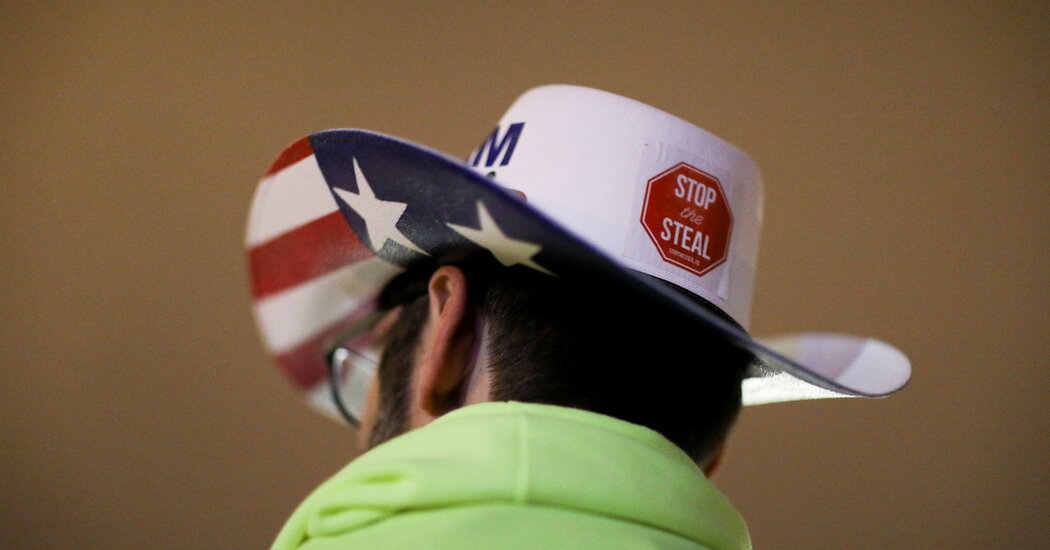 The Republican Party in Texas made a series of far-right declarations as part of its official party platform over the weekend, claiming that President Biden was not legitimately elected, issuing a “rebuke” to Senator John Cornyn for his work on bipartisan gun legislation and referring to homosexuality as “an abnormal lifestyle choice.”

The platform was voted on in Houston at the state party’s convention, which concluded on Saturday.

The resolutions about Mr. Biden and Mr. Cornyn were approved by a voice vote of the delegates, according to James Wesolek, the communications director for the Republican Party of Texas. The statements about homosexuality — as well as additional stances on abortion that called for students to “learn about the Humanity of the Preborn Child” — were among more than 270 planks that were approved by a platform committee and voted on by the larger group of convention delegates using paper ballots. The results of those votes were still pending on Sunday, but Mr. Wesolek said it was rare for a plank to be voted down by the full convention after being approved by the committee.

The resolutions adopting the false claims that former President Donald J. Trump was the victim of a stolen election in 2020 as well as the other declarations were the latest examples of Texas Republicans moving further to the right in recent months. Republicans control both chambers of the legislature, the governor’s mansion and every statewide office, and have used their dominance to push tough anti-abortion legislation, create supply-chain problems by temporarily adding additional state inspections at the border and renominate the Trump-backed state attorney general over a member of the Bush family in a primary runoff in May.

Mr. Wesolek disputed the notion that the declarations were tied to the state party’s rightward tilt. “That was the will of the body,” Mr. Wesolek said on Sunday. “We pride ourselves on being a grass-roots party.”

State party conventions in Texas have at times been venues for publicly airing internal rifts. In 2012, Gov. Rick Perry was loudly booed at the state Republican convention when he said he was backing the powerful lieutenant governor over Ted Cruz in a contested primary for Senate. On Friday, Mr. Cornyn — a key negotiator in the gun talks with Democrats — was booed by convention goers during a speech in which he tried to assure Republicans that the new legislation would not infringe on the rights of gun owners.

The state party’s resolution embracing the baseless 2020 stolen-election claims stated that “substantial election fraud in key metropolitan areas significantly affected the results in five key states in favor of” Mr. Biden. The state party, the resolution continued, rejected “the certified results of the 2020 Presidential election, and we hold that acting President Joseph Robinette Biden Jr. was not legitimately elected by the people of the United States.”

The resolution encouraged Republicans to “show up to vote” in November, and to “bring your friends and family, volunteer for your local Republicans and overwhelm any possible fraud.”

State Representative Steve Toth, a Republican who represents part of Montgomery County, a Houston suburb, said he left the convention before voting on the resolutions, but he expressed support for them. He said he hoped the Biden resolution would “encourage Republicans and Democrats to come together and to call for a forensic audit” of the 2020 election.

Jason Vaughn, 38, a Republican delegate from Houston, claimed credit for adding the “show up to vote” language in the Biden resolution. “My fear is that if we keep telling people the election was stolen, they’re going to not go and vote,” Mr. Vaughn said.

Mary Lowe, a delegate from the Fort Worth suburbs who was focused on education issues at the convention, said she was surprised the 2020 election results were a focus of attention by her Republican colleagues. But, she added, “I don’t know too many people that felt that Biden won.”

Ms. Lowe, the chairwoman of the Tarrant County chapter of a group known as Moms for Liberty, said she was among those delegates openly critical of Mr. Cornyn. But she added that she was embarrassed by the booing and did not participate in it.

“I don’t believe that booing is polite,” Ms. Lowe said. “I feel elected officials should be treated with proper decorum.”

Jamie Haynes, 47, a Republican delegate who lives in the Texas Panhandle with her husband and who says that, together, they own “a lot of guns,” said the boos directed at Mr. Cornyn showed there was a “resounding strong opinion that Republicans do not want their gun rights shaved — not just taken away — but even just shaved in any form.”

The resolution rebuking Mr. Cornyn that passed at the convention opposed red flag laws, which allow guns to be seized from people deemed to be dangerous. Those laws, according to the resolution, “violate one’s right to due process and are a pre-crime punishment of people not adjudicated guilty.”

The homosexuality plank passed the platform committee by a vote of 17 to 14, according to Mr. Vaughn, an openly gay member of the committee who voted against it.

“It does nothing to move us forward as a party and gain voters,” he said in a video of the committee meeting. In an interview, Mr. Vaughn said the shift at the convention was the result of a small number of people who “make the process miserable because they want to do all this extreme, far-right stuff.”

Mr. Toth disagreed, saying that on abortion, gay rights and the 2020 election, the Republican Party has been consistent in sticking to its conservative principles. “Defense of marriage? Abortion? Second Amendment? Where have we moved to the right?” he asked. “The Republicans have always been strong defenders of constitutional family values.”

“The Texas Republican Party is trying to take us back to a time when women couldn’t make decisions about their own bodies and when Americans lived in fear that they would be punished for being themselves,” Mr. Allred said in a statement.