‘The Automat’ Review: Put a Nickel in the Slot for Nostalgia 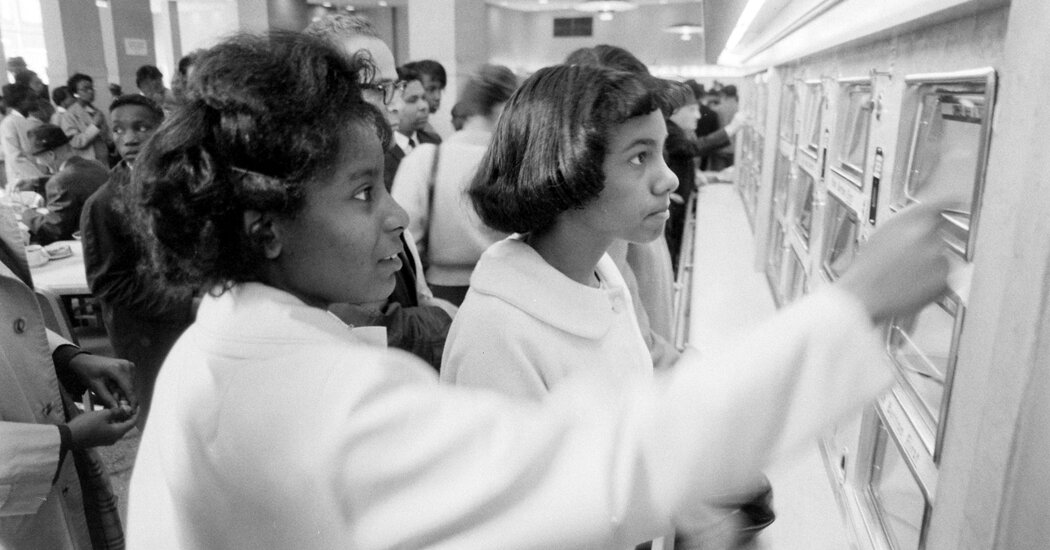 Whatever nostalgia is — homesickness, fantasy, delusion — it’s flooding “The Automat.” There’s something about people’s memories of these automated cafeterias that flourished in the United States for much of the 20th century — you put a nickel into a slot, open a door in an enormous wall of cabinets and pull out, say, a slice of pie or a ham sandwich — that sends them back to the era in which they frequented one. The documentary Lisa Hurwitz has directed about Automats is shaggy and full of cutesy stuff, mostly involving Mel Brooks. But the sight of all these lit-up faces — see Ruth Bader Ginsburg, Carl Reiner, Colin Powell — made me hunger to be back where they wish they were: at 5, at 17, at 20-something, plunked down at a table with a bowl of baked beans.

The movie unfurls the history of Horn & Hardart, the Manhattan-and-Philadelphia-based chain of restaurants the Automat was synonymous with. It’s an engrossing tale of commercial expansion, industrial innovation and cultural harmony even in times, like the Civil Rights era, when that kind of unison seems tough to fathom. Hurwitz finds biological descendants of Hardart and professional heirs of Horn. She locates John Romas, an Austrian immigrant who was the company’s vice president of engineering. There are conversations with the authors of a Horn & Hardart book, a moving visit to one of the designers of a powerfully witty 1970s ad campaign and a sit-down with W. Wilson Goode, Philadelphia’s first Black mayor, who served during a notoriously cataclysmic period. And the worst that anybody has to say about anything is that the Automat is gone.

Hurwitz and her editors, Michael Levine and Russell Greene, have the interviews, archival footage and bright, soaring, relentless music to plunge us, accordingly, into states of delight and visceral lament. I, at least, am astounded that a movie this chipper, one so easily distracted by its boldface names (Hurwitz includes footage of Brooks essentially telling her how to make the movie), also feels like the key to some lock on the American soul. Just about every source says that what they loved about the Automat was that everyone was welcome. So as the millionth exterior shot and umpteenth photo of those towering cabinets hit me, I got sad, too: why oh why did it all have to end? The answer is typical: the interstate, suburbanization, mismanagement, classism, snobbery, inflation. All of which this movie does more than allude to.

And yet — and this, for me, is a heavy yet — it feels as if the movie is skirting something. I get it: Hurwitz wins time with at least four American VIPs, three of whom are no longer with us, and the fourth, Brooks, remains so bewitched by the Automat that he writes a theme song and performs it with real Jimmy Durante bark. Romas, we learn, has also died. And each luminary’s enchantment appears to have inhibited an urge to commit more rigorous probing. (This is a feel-good movie!)

I just wonder whether it could have felt better to know more precisely how Horn & Hardart managed a racially integrated clientele when its competition couldn’t have cared less for that sort of thing. When Ginsburg and others enthuse that everybody was welcome, they mean matrons and stenographers, executives, artists and “bums,” to quote Brooks; a panorama of metropolitanism commingling over coffee and Salisbury steak. But the montage of images that accompanies Ginsburg’s assessment includes one photo of an Asian family and another of a blurry Asian man sharing a table with a white diner. The movie has photos of other nonwhite diners; they just don’t appear in this “everybody was welcome” section.

The doors did appear to be open to all. Goode offers that Horn & Hardart was “a nice place where African Americans could go and feel dignified.” Powell more or less backs him up, only to have Hurwitz interrupt not with a follow-up question but to move and make an unseemly adjustment of his necktie. (He doesn’t seem amused.) On one of our regular phone calls right before she died in 2020, when she was about 90, my grandmother Martha Ann James, a lifelong Philadelphian (and dignified African American) who is very much not in this movie, rhapsodized for 20 minutes about Horn & Hardart: the coffee, the classy downtown building, the meatloaf, the affordable prices, the magnitude of welcome. (This from a woman who maintained quite a catalog of unwelcome.)

So — this is not to dispute the film’s gloss on the belonging one could experience at the Automat. It’s merely to say that it is indeed a gloss. Powell remembers that part of the magic of the dining experience was the magic of the automation itself. As a boy, he knew that someone was behind that wall of food lockers — cooks, maintenance men, servers of a sort. But Hurwitz is content to let the mystery be.

If anything, “The Automat” seeks to burnish the mystique — it won’t be hijacked by social politics even if the company’s stance in such matters appeared to be the right one. The movie opts for a starry, top-down vantage. We hear about the chiefs and their business decisions and, save for the late appearance of the actor and former busboy Apache Ramos, very little from or about the people behind the lockers, or even regular people who remember eating there. What we learn about the bosses is illustrative, of course. So is Hurwitz’s approach.

Her determination to embody nostalgia succeeds all too well. As the film unspools Horn & Hardart’s demise, something telling happens. A person close to the company identifies a shift away from a kind of civic benevolence in its management style after its president, Edwin Daly, died in 1960. A minute later, the movie turns to Howard D. Schultz, the Starbucks founder and executive, who recalls that his first Automat experience is what made him want to be a merchant. The Horn & Hardart ethos infuses Starbucks’s, he says, beaming. You can see what he means. He then holds up a framed photograph of Automat cabinets that hangs in his office, a handsome people-free image of imprisoned pies. He, too, mentions that the place was run by magic. It’s a shame we don’t hear more about the less fancy magicians. The closest we get are rapturous accounts of the women who changed dollars into nickels without ever looking at the coins. With minutes left, Brooks goes gaga at the thought of the Automat’s coconut custard. “God made that,” he says. In this movie, He might as well have.

The Automat
Not rated. Running time: 1 hour 19 minutes. In theaters.