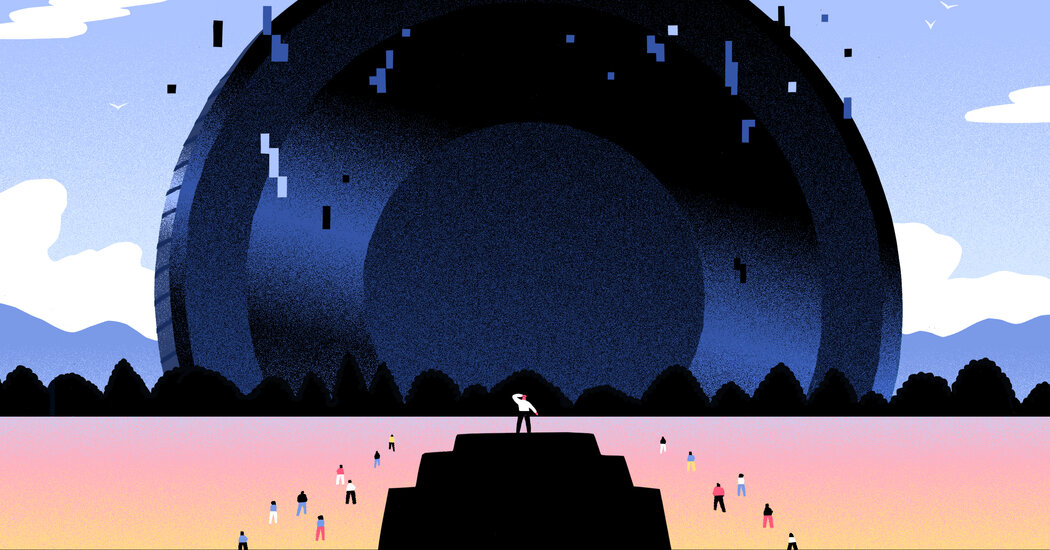 OAKLAND, Calif. — When Sandy Carter left her job as a vice president of Amazon’s cloud computing unit this month, she announced in a LinkedIn post that she was joining a crypto technology company. She included a link for open positions at the start-up.

Within two days, she said, more than 350 people — many from the biggest internet companies — had clicked the link to apply for jobs at the firm, Unstoppable Domains. The start-up sells website addresses that sit on the blockchain, the distributed ledger system that underpins cryptocurrencies.

Ms. Carter is part of a wave of executives and engineers leaving cushy jobs at Google, Amazon, Apple and other large tech companies — some of which pay millions of dollars in annual compensation — to chase what they see as a once-in-a-generation opportunity. That next big thing is crypto, they said, a catchall designation that includes digital currencies like Bitcoin and products like nonfungible tokens, or NFTs, that rely on the blockchain.

Silicon Valley is now awash with stories of people riding seemingly ridiculous crypto investments like Dogecoin, a digital coin based on a dog meme, to life-changing wealth. Bitcoin has soared around 60 percent this year, while Ether, the cryptocurrency tied to the Ethereum blockchain, has increased more than fivefold in value.

But beyond that speculative mania, a growing contingent of the tech industry’s best and brightest sees a transformational moment that comes along once every few decades and rewards those who spot the seismic shift before the rest of the world. With crypto, they see historical parallels to how the personal computer and the internet were once ridiculed, only to upend the status quo and mint a new generation of billionaires.

Investors, too, have flooded in. They have poured more than $28 billion into global crypto and blockchain start-ups this year, four times the total in 2020, according to PitchBook, a firm that tracks private investments. More than $3 billion has gone into NFT companies alone.

“There is a giant sucking sound coming from crypto,” said Sridhar Ramaswamy, chief executive of search engine start-up Neeva and a former Google executive, who competes with crypto companies for talent. “It feels a bit like the 1990s and the birth of the internet all over again. It’s that early, that chaotic and that much full of opportunity.”

Crypto, which has also been rebranded as the less foreboding web3, may be no different from past speculative bubbles like subprime mortgages or the tulip craze of the 17th century, skeptics said. Much of the mania, they said, is being driven by a desire to get rich quick by trading an asset class that often seems based on internet jokes.

But the growing ranks of true believers say crypto can change the world by creating a more decentralized internet that is not controlled by a handful of companies. While such possibilities have existed since Bitcoin emerged in 2009, crypto products such as NFTs broke through to the mainstream only this year. That has accelerated the exodus from Big Tech companies into the crypto world.

This month, Brian Roberts, the chief financial officer of Lyft, left the ride-hailing company to join OpenSea, a popular crypto start-up. “I’ve seen enough cycles and paradigm shifts to be cognizant when something this big is just emerging,” he said in an email. “We are Day 1 in terms of NFTs and their impact.”

Last month, Jack Dorsey stepped down as Twitter’s chief executive to spend more time on cryptocurrency and web3 efforts at his other company, Square. In a nod to the blockchain, Mr. Dorsey also renamed Square as Block. He underscored the change by revamping the photo portraits of Block’s executives as block-headed avatars, and built a software tool so others could create their own block-headed avatar.

And David Marcus, the head of cryptocurrency efforts at Meta, the parent company of Facebook, announced that he was leaving by the end of the year to follow his “entrepreneurial DNA.” Mr. Marcus, 48, plans to work on his own cryptocurrency project, two people with knowledge of his plans said.

Mr. Marcus declined to comment, as did a Meta spokesman.

Crypto’s allure has been so irresistible that some of the biggest tech companies are scrambling to retain employees. At Google, concerns about keeping employees — including not losing them to crypto companies — grew so pressing that the issue became part of the executive agenda discussed every Monday by Sundar Pichai, the company’s chief executive, and his top deputies, two people with knowledge of the discussions said.

Google also started offering additional stock grants to employees in parts of the company that seemed ripe for poaching, these people said. Google declined to comment.

Unlike Meta, which has embraced crypto, Google has been reluctant to jump into the movement. But Google employees saw crypto’s opportunities firsthand when Surojit Chatterjee, a vice president, left the company last year to become the chief product officer of Coinbase, one of the largest cryptocurrency exchanges.

When Coinbase went public in April, Mr. Chatterjee’s stake in the company soared to more than $600 million in value. He had worked there for just 14 months.

Such vast amounts of crypto wealth have created a fear of missing out, or FOMO, among many techies — especially those whose friends bought Bitcoin several years ago and now are hugely wealthy.

“Back in 2017 or so, people were mostly in it for the investment opportunity,” said Evan Cheng, co-founder and chief executive of Mysten Labs, a start-up focused on building blockchain infrastructure projects. “Now it’s people actually wanting to build stuff.”

A Guide to Cryptocurrency

A glossary. Cryptocurrencies have gone from a curiosity to a viable investment, making them almost impossible to ignore. If you are struggling with the terminology, let us help:

Bitcoin. A Bitcoin is a digital token that can be sent electronically from one user to another, anywhere in the world. Bitcoin is also the name of the payment network on which this form of digital currency is stored and moved.

Blockchain. A blockchain is a database maintained communally, that reliably stores digital information. The original blockchain was the database on which all Bitcoin transactions were stored, but non-currency-based companies and governments are also trying to use blockchain technology to store their data.

Coinbase. The first major cryptocurrency company to list its shares on a U.S. stock exchange, Coinbase is a platform that allows people and companies to buy and sell various digital currencies, including Bitcoin, for a transaction fee.

Crypto finance. The development of cryptocurrencies spawned a parallel universe of alternative financial services, known as Decentralized Finance, or DeFi, allowing crypto businesses to move into traditional banking territory, including lending and borrowing.

Mr. Cheng, 50, left Facebook in September after six years there, most recently working on Novi, its crypto effort. Of Mysten Labs’ roughly 20 employees, most of whom are scattered across San Francisco, London, New York and elsewhere, roughly 80 percent come from tech companies like Facebook, Google and Netflix.

Companies focused on blockchain technologies have proliferated, including cryptocurrency exchanges like Bitpanda, Gemini and CoinList; NFT and art collectible companies like OpenSea and Dapper Labs; and infrastructure companies like Dfinity and Alchemy.

Some of the brain drain into crypto has also been spurred by worries about the control and dominance of the biggest tech companies by their own employees. Many had joined Google, Facebook and others to create something new, only to encounter bureaucracy and the backlash of working at the behemoths.

Those leaving behind a Big Tech salary do not have to wait as long for a payoff at a crypto start-up as those at traditional tech start-ups.

While employees generally accept a smaller salary at tech start-ups in the hope that the company’s stock will hit it big one day, workers at crypto start-ups are provided “liquidity,” or the ability to cash out their shares, much earlier. Often, they can do so in the form of trading their company’s cryptocurrencies, according to Dan McCarthy, a recruiter for the investment firm Paradigm who has written on the potential upsides of crypto start-ups for tech workers.

In some cases, crypto start-ups offer compensation packages on a par with the biggest tech firms because of how easily employees can convert their company’s “tokens” — or the underlying cryptocurrency backing the start-up — into cash.

“It’s not necessarily the case that you have to go take one-third of your Big Tech salary anymore, because a lot of these companies are so well capitalized,” Mr. Cheng said.

Ms. Carter, the former Amazon vice president, said people were interested in working at crypto firms for more than just money. Some were drawn to the ethos of web3, which strives to decentralize power and decision making. It’s an alternative to how Google and Facebook came to dominate the internet by sucking up personal data from users to sell targeted ads.

Ms. Carter said there was a great deal of interest about web3 at Amazon but was not recruiting there because she had agreed not to solicit her former colleagues.

So would the exodus of tech employees to crypto continue?

“The answer is absolutely yes,” she said. “The time is just perfect to jump in on it.”