‘The Odds Were Stacked Against Us’ 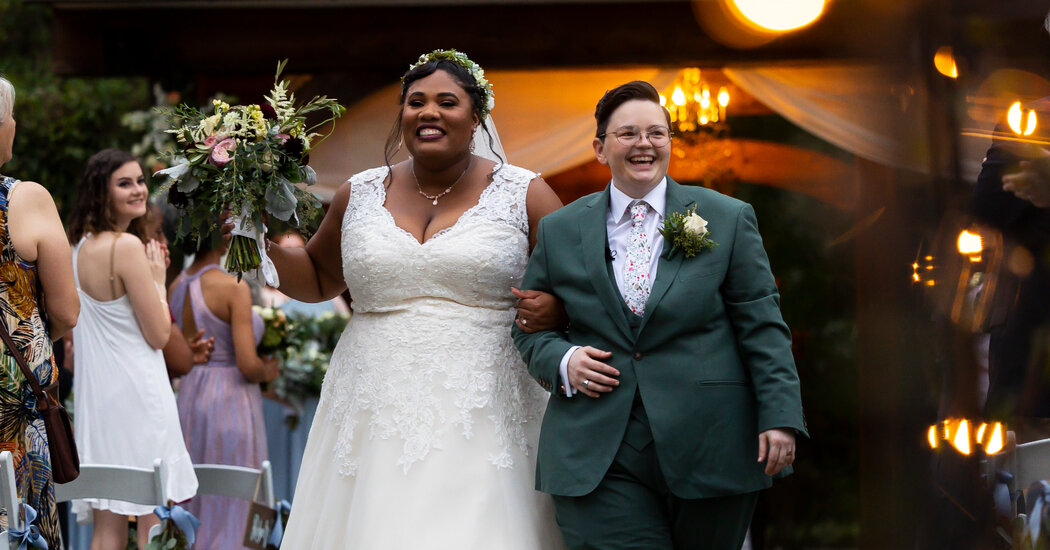 “We are a lesbian-queer, interracial, progressively Christian couple in the Deep South, from conservative families. The intersectional and circumstantial odds were stacked against us,” said Mx. Reynolds, who is nonbinary and uses gender-neutral courtesy titles and pronouns.

Ms. Wilson was facing an internal battle that “wouldn’t let me be with Kelsey without feeling like I was going to hell,” she said, adding that she also struggled to overcome feelings of cultural betrayal “by being with someone from a culture that has oppressed mine for hundreds of years.”

Mx. Reynolds, who attended private religious schools until college, said “there was a lot of indoctrination that I had to work through.” They added, “We were in a really rough spot with our relationship toward the end of 2019 and were even questioning if we wanted to get married.”

The couple, who reside in Houston, met Jan. 21, 2013, as students in a human behavior course at Southeastern Louisiana University in Hammond, La. (Both are Louisiana natives; Mx. Reynolds, 30, is from Baton Rouge and Ms. Wilson, 30, is from Gonzales.) Mx. Reynolds sat diagonally in front of Ms. Wilson, who took notice of Mx. Reynolds’s spirited disposition and budding relationship with one of her friends.

“It was the perfect spot for me to watch Kelsey with intrigue. They were completely unaware that I existed,” Ms. Wilson said. “I was so annoyed by Kelsey’s boisterous personality in the classroom and the fact that they were ‘stealing’ my best friend, Holly Edmondson.”

Over time, Ms. Wilson said her annoyance evolved into an appreciation for Mx. Reynolds’s “big personality, humor and kindness.” But months would pass before they actually “had a proper conversation,” she added. On April 22, 2013, the last day of class, they both “hung out” with Ms. Edmondson at the campus library’s cafe and the two exchanged numbers.

The pair texted one another for a couple of weeks and then, Mx. Reynolds said, “We basically ghosted each other.” But by the second week of fall semester, they had reconnected. “I went from being annoyed to intrigued to friends to best friends to I want to kiss you now,” Ms. Wilson said.

Once they started dating in August 2013, Ms. Wilson and Mx. Reynolds said it wasn’t long before each realized they had found something special in the other. The couple knew they had fallen in love, they said, in August 2014 while attending Glorieta Adventure Camp in Santa Fe, N.M., which incorporates Christian teachings into its camps and retreats.

They were listening to “No Other Love” by Chuck Prophet and looked into each other’s eyes. Suddenly, Ms. Wilson found hers welling up with tears.

“I was overcome by silent but profound emotion,” she said. “I experienced such safety in that moment. I realized that this was love, and I wanted to look into their eyes, feel this way, be safe, held and wanted for the rest of my life.”

Ms. Wilson added that Mx. Reynolds was overcome with emotion as well. “Their eyes filled with tears and the next thing we knew, we were both sitting silent, with music filling the room, eyes locked on one another weeping. It was like we had a whole conversation.”

After graduating with bachelor’s degrees from Southeastern Louisiana University, Ms. Wilson and Mx. Reynolds both earned master’s degrees in social work from the University of Houston Graduate College of Social Work.

Mx. Reynolds works as a volunteer services programs and engagement supervisor at the Houston Food Bank. Ms. Wilson, who lost her job because of the pandemic, is now focusing on growing her crafting business, the Doris & Dot Shoppe, for which she makes jewelry and home décor items.

“After being laid off during Covid, I’ve been focusing on more creative work for the time being as I gently re-enter the work force,” she said. “I’ve been recovering from severe chronic burnout.”

On March 18, 2017, the two were engaged when Ms. Wilson and Mx. Reynolds each surprised the other with a proposal on their college campus. “It was spring break and we went back specifically for me to propose, but Kamah didn’t know until the day of,” said Mx. Reynolds, whose proposal involved a scavenger hunt.

Friends of the couple delivered Ms. Wilson the hunt’s first clue. “Come to the classroom where our minds first met,” it read. When Ms. Wilson arrived at the location, she found another clue: “Come to the tree where our lives intertwined like its roots.” A third — “Come to where Aslan lives” — awaited her there.

The last clue — “Come to the garden where our souls first met” — led Ms. Wilson to Tinsley Gardens, on the grounds of Southeastern Louisiana University. She arrived to find “Dear True Love” by Sleeping at Last, one of the couple’s favorite songs, playing, along with a roving photographer and some friends who were in on the plan.

On the ground was a path of rose petals that turned into a heart, at the center of which stood Mx. Reynolds, who read Ms. Wilson a love letter and asked her to marry them.

But Ms. Wilson did not simply say yes, as Mx. Reynolds expected.

Instead, she said, “I will if you say yes, too.” Confused, Mx. Reynolds watched as Ms. Wilson rummaged through her bag, where an engagement ring for Mx. Reynolds had been waiting in case of this very moment.

“It was better than the movies,” Ms. Wilson said.

The couple chose Oct. 11, 2020, as their original wedding date. “That day is both National Coming Out Day and the anniversary of when we both said those big three words,” Mx. Reynolds said. But because of the pandemic, they postponed the date by almost one year exactly.

On Oct. 10, they were wed in the garden at Shirley Acres, an events space in Houston. Mx. Reynolds’s uncle, Benjamin Thomas Lawson Jr., who was ordained through the Universal Life Church for the event, officiated. The 120 guests, most of whom were vaccinated, included Mx. Reynolds’s parents and paternal grandmother and Ms. Wilson’s mother.

Ms. Wilson’s father and other family members declined to attend.

“Many of my family members weren’t present because they have made it clear that this union is against God and is illegitimate. Many friends who used to be core figures and support systems in my life disconnected too,” Ms. Wilson said.

Ms. Wilson wore a gown made of organza and French tulle with lace appliqués and a scalloped-edge veil decorated with pearls. She carried a bouquet wrapped in “my late grandmother Doris’s white gloves fastened by a few of her lapel pins,” she added. “My grandmother Marion’s lapel pin was also fastened to it.” Mx. Reynolds donned a bespoke three-piece green suit.

While neither of them is Jewish, the couple included a ketubah signing as part of the ceremony. “The Christian faith comes from a Hebrew history. I wanted to honor that with a ketubah, a contract between us and God,” Ms. Wilson said. “A marriage license is between us and the government.” They also signed a Bible inscribed with their names and family tree at the wedding.

Mx. Reynolds added that “we asked our guests, as our village, for a vow of support, which we already know we have, but how sweet to have it on camera.”

Instead of hyphenating or taking one or the other’s last name, the couple chose to create a new one of their own. They came up with Lovelle. “Our heart’s desire was something unique, nearly unheard-of, with deep meaning, and something that meant or translated to ‘love,’” Mx. Reynolds said. “The heart of the name is love.”

At the reception, a four-layer wedding cake with four different flavors and fillings was served. The couple also had a cake pull. “It’s a Southern tradition. You attach ribbons to charms and each person pulls out a ribbon and the charm is your fortune or your omen. It’s a very Louisiana thing,” Ms. Wilson said.

Ms. Wilson also presented a gift to Mx. Reynolds, who is Irish and Scottish, that celebrated their family history: A souvenir plot of land in the Slievekirk Wood reserve in Ardmore, Ireland, which came with an honorary title. “When you own the land, you become a lord or lady. We are now Lord and Lady of Ardmore,” Ms. Wilson said.

Their second-to-last dance was a New Orleans style Second Line that brought all of the guests to their feet. “Even the waitstaff was dancing,” Ms. Wilson said. Attendees cleared the floor as the Second Line ended, leaving the couple to have a last dance together to “Dear True Love,” the song playing when they were engaged.

As Ms. Wilson and Mx. Reynolds exited the venue, guests waved ribbon wands with bells attached to the ends. “It was pretty magical to see the ribbons waving and hear the bells tinkling,” Ms. Wilson said. “And to hear everyone chanting, ‘Lovelle at last.’”

Planting Roots During the ceremony, the couple transplanted a Magnolia tree from a nursery pot into a new pot with dirt from the backyards of their loved ones. “It’s the state flower of Louisiana, where we’re both from,” Ms. Wilson said. “It represents perseverance, longevity, and all of those things you want in a relationship.”

Mothers’ Day Instead of the traditional father-daughter dance, the couple had mother-daughter dances at their reception. Mx. Reynolds jitterbugged with their mother to “Mom” by Meghan Trainor “because she taught me how to jitterbug,” they said. Ms. Wilson danced with her mother to “Phenomenal” by Benjai. “We would dance around the house to it to put us in a good mood,” she said.