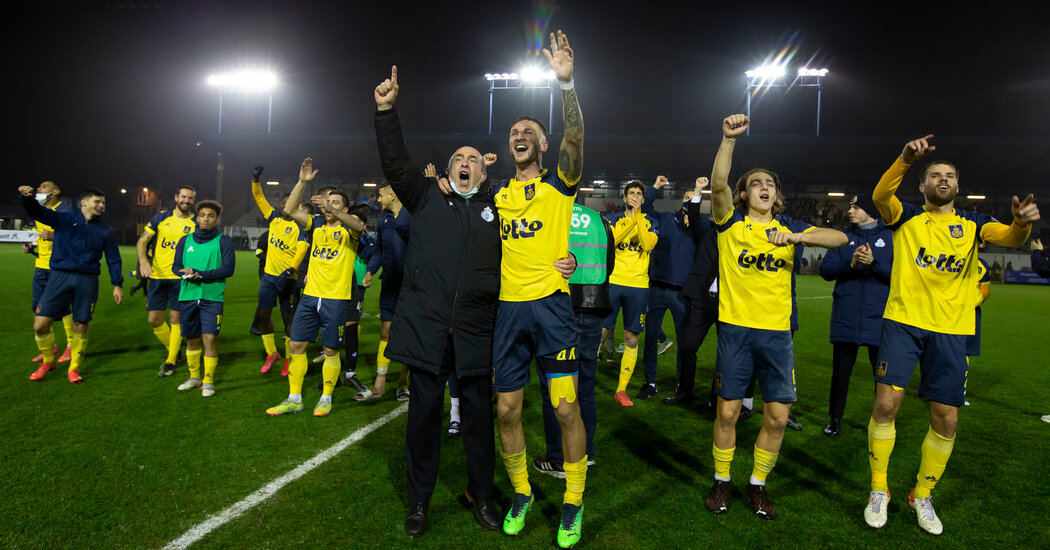 That first meeting told Alex Muzio all he needed to know. Not long after he and his business partner, the gambling tycoon Tony Bloom, bought Royale Union Saint-Gilloise, a Belgian soccer team, Muzio sat down with the club’s coach. He wanted to discuss potential recruits.

Starlizard’s business model is using data to find an edge. It has information on tens of thousands of players from across the world. Its bespoke algorithms are designed to trawl through it and spot opportunities first, then talent. Starlizard’s plan in team ownership was to do the same.

Bloom already owned a team in England: The club he has always supported, Brighton, has been transformed into a mainstay of the Premier League by Bloom’s money and methods. But he and Muzio wanted to see what else their “I.P.” could achieve. “We wanted,” Muzio said, “to win a title.”

By May 2018, when Bloom completed his purchase of Union, Muzio was itching to get started. The club, which last celebrated a title in the years between world wars, was at the time mired in the second tier of Belgian soccer. It was staffed largely by volunteers. Its training facility in the suburbs of Brussels did not have showers. Muzio still cannot say with certainty that there was a toilet.

He did not intend for it to stay that way. The first step was to be promoted to Belgium’s top division within three years, and to do that, Muzio knew, the squad needed to be revamped. He presented the club’s experienced manager, Marc Grosjean, with a list of potential signings, all of them selected and assessed by Starlizard’s data.

Grosjean was not impressed. He used an expletive to describe Muzio’s suggestions, and then offered his own alternatives. “He told me that he would much rather sign a set of Belgian players, players that he knew,” Muzio said. It did not take long to find out what Starlizard’s metrics made of them. Grosjean was gone by the end of the month, his abrupt, if mutual, departure announced as “a difference of opinion on the sporting development of the club.”

“We have ways that we want to do things,” Muzio said. Resistance would only slow things down.

Three years later, his ideas have been vindicated. Union met its target of being promoted last summer. A little more than halfway through this season, it will spend Christmas atop the Jupiler Pro League table, six points clear of Club Brugge. The way Belgian soccer is structured, with a traditional league schedule followed by an end-of-season playoff, means a first domestic title for Union since 1935 remains only a distant possibility. But it is a possibility, nonetheless.

That, of course, would not have been possible without the arrival of Muzio, who serves as Union’s chairman, and Bloom, though the latter has no day-to-day involvement with the running of the club.

It is not quite fair to describe their presence at Union as a stroke of good fortune. The team was acquired because it met the stringent criteria established at the start of the search: the right sort of club at the right sort of price in the right sort of place. The broader Brussels region, where Union has been based since 1897, is home to more than a million people and only one major team, its traditional rival Anderlecht. It was not just random chance.

Muzio, Bloom and Starlizard looked at teams in a host of leagues. Others might have had different priorities, different requirements, different ideas. It just so happened that Union fit their bill exactly, and so it was Union whose existence was transformed, a husk of a club suddenly revitalized.

This is a version of a story that has played out across Europe with increasing regularity in recent years: teams either adrift in mediocrity or that had fallen on hard times uplifted, seemingly overnight, by some external force. On the surface, the clubs have little in common. Underneath, they are bound by a single thread, one that can be traced to England.

That European soccer has, over the last decade or so, been shaped by the Premier League is beyond doubt. The wealth of England’s top flight has long exerted a gravitational pull on the rest of the continent. English clubs serve as the most reliable market for players, drive up prices in the transfer market and send salaries soaring. Players are acquired across Europe with one eye on future sales to England, and often purchased with money that is a downstream consequence of the Premier League’s apparently pandemic-proof broadcast deals.

In recent years, though, the nature of that impact has changed. It no longer exists at one remove; instead, English clubs — or, rather, the international ownership groups behind them — have invested in overseas teams directly, giving them unfiltered influence on championships across Europe, and around the world.

The reasons for that vary. Two of Union’s rivals in the Jupiler Pro League have English-inflected ownership: O.H. Leuven is owned by King Power, the Thai company that controls Leicester City, and Ostend is a part of a group of clubs belonging to Pacific Media Group, among them the French side Nancy; F.C. Den Bosch in the Netherlands; and a second-tier English team, Barnsley.

While Leuven has, at times, served as something more akin to a farm team — a place to send young players to gain experience — Pacific Media Group believes its approach helps to improve performance and reduce costs across its network of teams. “We don’t need to replicate all staff in all markets,” Paul Conway, the group’s founder, told the Unofficial Partner podcast.

Ostend, Nancy, Barnsley and the rest share not only employees but knowledge. “We have a greater knowledge base than most,” Conway said of his clubs’ recruitment departments. That helps to prevent “leakage,” as he put it. “You spend lots of money on a player and then, at the end of the contract, that player walks away,” he said. “Because we have a uniform style of play as a group, we can spend our life with these players.” If one club does not require a player, in other words, a slot can be found for him elsewhere.

A similar approach has helped Estoril, long a makeweight in Portugal’s top division, to compete for a spot in the Europa League after coming under the aegis of a group of teams backed by David Blitzer, the Blackstone executive who is a part of the consortium that owns the Premier League club Crystal Palace.

Midtjylland, the Danish champion, shares an owner — another gambling magnate, Matthew Benham, a former colleague of Bloom’s — and a philosophy with Brentford F.C., a data-driven organization newly promoted to the Premier League.

And then, of course, there are the clubs that form some of the City Football Group network, centered on Manchester City. The group’s record is, at best, mixed: Though it has enjoyed success in Major League Soccer and Australia — where New York City F.C. and Melbourne City are the reigning champions — its European ventures have been more complex.

The group’s Belgian club, Lommel, remains mired at the wrong end of the second division despite a far greater budget than many of its peers, and Girona, its Spanish outpost, was demoted from La Liga in 2019 and has not returned. Troyes, the French team that City’s owners bought last year, was promoted at the first attempt, but is currently struggling against immediate relegation.

Union’s relationship with Brighton is not quite so hierarchical. The depth of Starlizard’s knowledge of the game means that its methods are beyond the reach of most of its rivals — “They’re impossible for other teams to do,” Muzio said — but Muzio rejected the idea that Union is any or all of feeder, sister or partner club.

“We are so independent,” he said, before referring to Bloom: “Tony is the majority owner, but he is so uninvolved at Union. He doesn’t meddle. We have the freedom to do it how we want to do it.”

Much of the methodology at Brighton and Union is inevitably the same, he said, rooted in the way Starlizard has always worked, but the clubs do not share anything beyond that. So far, it has proved more than enough to have Union restored — for the time being — to the pinnacle of Belgian soccer with an expertise crafted and honed and polished in England.