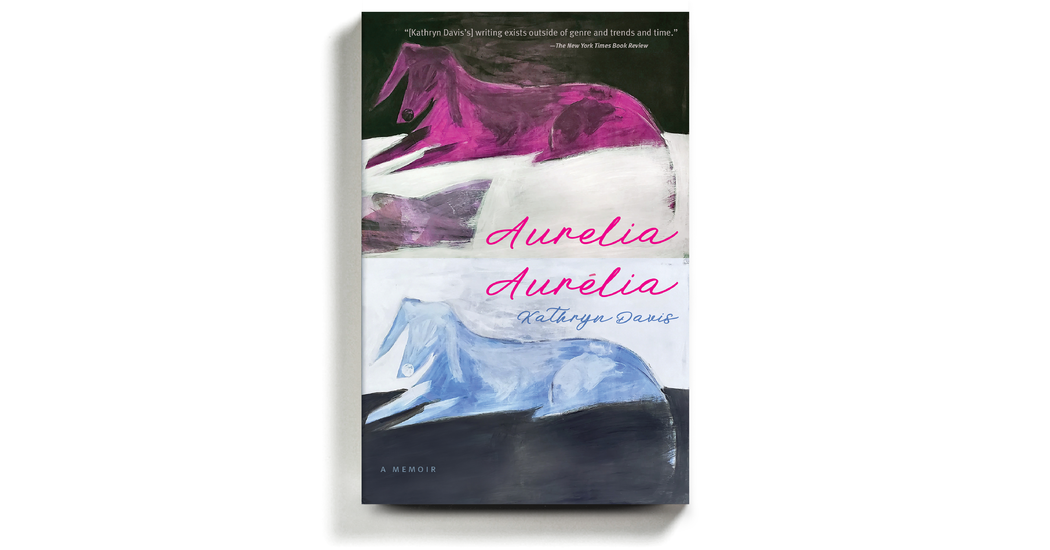 Davis’s eight novels bear little relationship to anything that might be lassoed into the category of “contemporary fiction,” and “Aurelia, Aurélia” — her first work of nonfiction — is also an outlier. It’s like one of those remote places populated by landrace flora and fauna that exist nowhere else on earth.

The subject is the death of Davis’s husband, Eric, from cancer. While Eric is dying, the two spend their mornings side by side in bed. One day Eric enumerates all of the money and effort the couple has put into their house — the stone walls, the beech tree out front, his complete collection of Rex Stout detective novels on the shelves — and poses a question: After all this work, how could he dream of leaving? That, of course, is one eternal anguish of foretold deaths. Why now?

Samuel Johnson wrote that “the safe and general antidote against sorrow is employment,” a sentiment that might underpin the entire genre of grief memoirs. But it’s worth noting that he came to this recommendation only after rejecting two common methods of handling grief. The first, Johnson wrote, was forcing oneself into “scenes of merriment.” (This echoes the axiomatic dating advice that the best way to get over a breakup is to start dating someone new.)

The second method Johnson dismissed was that of vicarious wallowing — of attempting to dampen one’s own pain by focusing on other people who had it worse. For Johnson, the first method failed because it sucks (not his exact words), and the second because it could worsen the affliction it aimed to treat. The closest thing to a remedy, he wrote, was motion.

And so, to write. The “plot” of Davis’s life and Eric’s death unfolds in time-shifting episodes. One moment we are on a bus next to the author in high school, heading home from a class trip to the Cloisters in New York. Then, decades later, we are reading the newspaper with Eric. And then back to 1956, when Davis’s father has given her a glossy I LIKE IKE sticker, which she adheres to the top drawer of her maple dresser, in direct violation of the family’s no-stickers-on-furniture rule.

What connects these vignettes? They are evidence of Davis’s habit of vigilance. On the school bus she analyzed the mindless chatter of classmates, her mind racing from James Bond to the Holy Ghost. In bed with Eric she didn’t merely gaze out the window but located patterns in bits of sky framed by branches. The I LIKE IKE sticker was her scouting companion as she monitored the night sky for planes that might bomb the family home.

At the age of 7, Davis came down with pleurisy and spent a month in bed. Her mother read Hans Christian Andersen stories as a vaporizer sent puffs of yellow steam into the sickroom. The fairy tales affirmed Davis’s sense of mortality to such a degree that she experienced the illusion of having composed them herself: “I didn’t think they’d been written for me, Andersen having ‘had me in mind,’ or that they conveyed my view of things with unusual precision — no, when I heard these stories I was infused with that shiver of ecstasy that is an unmistakable symptom of the creative act.”

In a book about death, it’s not surprising that Davis is fixated on metamorphoses and thresholds. She trains her focus on “ghost-moments”: the instant a person steps off the edge of a cliff before she hits the ground, or the split second between opening a door and entering a room. She’s interested in the bardo and in the musical “Brigadoon”; in the fact that it took Flaubert three days to write a simple transition; in the “often all but inaudible transit” from one tonal mood to another in Beethoven’s bagatelles.

She also chronicles the knotty contradiction of grief, a form of suffering both unique and banal — banal in the sense that grief happens all the time and to everyone. For Davis, one severance follows the next. In her childhood there were two goldfish, Potato and Carrot, who “committed suicide” together by leaping out of the bowl that Davis placed on a windowsill. There was the day when Davis’s father took her down to the cellar, fetched a gun and made his daughter promise to put him out of his misery if “at any time in the future he lost all his faculties.”

Davis is not a person to sentimentalize a body’s expiration, whether goldfish or human. Or, indeed, worm: In high school biology, she and other students dissected a liver fluke, slicing the head in half with a razor until two new heads formed. The experiment was supposed to end there, but Davis kept going until her creature sprouted eight heads. (Then it died.)

Recounting the worm surgery leads to a meditation on the word “fluke” — from the Greek for “floor,” Davis’s teacher told the class. But also in the sense of a chance occurrence: “a lucky shot in billiards, a sudden gust of wind.” It was a fluke, Davis writes, that she married a man seven years younger than she was, the same age difference as the one between his own parents.

Traditionally a memoirist’s task is to gather the flukes of her life and marshal them into something resembling a story. But Davis has a different project in mind. She has written a memoir that mimics the atemporal quality of the episodes that give meaning to life. “Aurelia, Aurélia” doesn’t care for the constraints of melody, but is nonetheless an entrancing song.