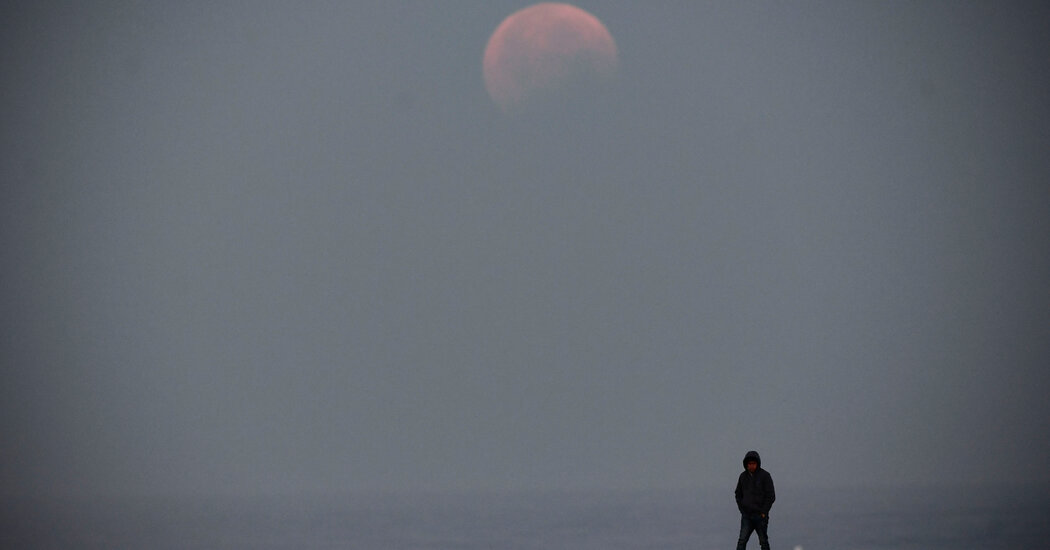 When the moon shines in night skies on Thursday into the early hours of Friday morning, you will get a chance to witness a celestial phenomenon not seen since the 1440s.

Here’s what you need to know about Thursday and Friday’s eclipse, which is also being called a blood moon and a Beaver moon.

When is the eclipse, and where can I see it?

The astronomical phenomenon will play out in night skies over North America, large chunks of northern South America, northeastern Asia and the eastern side of Australia.

The full moon will dance into alignment with Earth and the sun. Earth’s shadow will gradually shroud the visible lunar surface, then retreat to reveal normal moonlight, in a process that takes six hours and two minutes, to be exact, according to NASA.

The extended show means you’ll have ample time to catch at least part of the eclipse. Starting at 1:02 a.m. Eastern time, the moon will begin to enter the outer part of Earth’s shadow, called the penumbra. It will gradually dim as the shadow creeps across its surface for about an hour before it becomes a partial lunar eclipse at 2:19 a.m., when it’s almost fully cloaked in the umbra, or the darkest part of the shadow.

At 3:45 a.m., the colors will become visible, flushing the moon in a rusty amber hue like a celestial sunset cast onto the lunar surface. This shade will build in intensity for the eclipse’s peak at 4:03 a.m., covering 99.1 percent of the moon’s face in Earth’s shadow. By 4:20 a.m., the shadow will cross enough of the moon’s surface that the colors are no longer visible, and the eclipse will fade as the moon slowly falls out of alignment. The spectacle officially ends at 7:04 a.m.

How do I see a lunar eclipse?

It’s pretty simple: Just look up. No telescopes or binoculars necessary. If you can see the moon from where you are, you should be able to see it in eclipse. Zeroing in on it with one of those tools will give you the opportunity to take in some features of the near side of the moon in a new hue.

Why does the moon change colors during a lunar eclipse?

During the eclipse’s peak, the moon will appear in deep hues of red and orange, blushing the surface of the near side that faces our planet in a sheen of colored sunlight filtered by Earth’s atmosphere.

“If the skies are clear, it’s worth getting up for, even early in the morning,” said Allyson Bieryla, an astronomer who manages telescopes at Harvard University’s Astronomy Lab.

The colors are a result of the same effect that gives sunsets on Earth hues of pink, red and magenta, a process called Rayleigh scattering. Light waves from the sun appear in hues of blue when they beam directly through the atmosphere during the day, and appear yellowish to reddish during sunset as they shoot through thicker swaths of the atmosphere.

On normal nights, the moon gets its white glow in the night sky when sunlight reflects from its surface. But on Friday, like a big planetary filter, sunlight will beam through the brim of Earth’s atmosphere and project sunset colors on the lunar surface.

What’s the best way to photograph a lunar eclipse?

Photographing the eclipse shouldn’t be very difficult, though you’ll likely need a tripod to keep the camera steady for longer exposure shots in the dark, or if you want to zoom in for a detailed close-up, according to John Kraus, a photographer who specializes in astrophotography.

If your digital camera has a timer or if you have a remote cable for snapping images, you can get “clear images without motion blur from bumping your camera,” Mr. Kraus said.

A more ambitious photographic trick requires photo editing software to create a composite image, or multiple photos merged into one frame, that shows the full sequence of a lunar eclipse.

Set your camera on a tripod with a wide shot of the sky, framing the moon somewhere in the middle. If possible, tweak your camera’s time-lapse settings (or use a remote controlled shutter with an interval) to automatically take a photo every 30 or so minutes throughout each phase of the lunar eclipse.

If you stick around for all six hours — without moving your camera — you will have 12 photos, each with the moon placed in a slightly different part of the sky. Overlay, or “stack” those images together in photo editing software to create a classic lunar eclipse image.

Why does this eclipse last so long?

Lunar eclipses happen roughly two times a year when Earth falls directly between the moon and sun — for instance, there was a total lunar eclipse in May that was also a supermoon. But they usually last for far shorter durations. The second slowest eclipse of the century, before Friday’s, happened in 2018 and lasted one hour and 43 minutes.

The three and a half hours of eclipse time for Friday’s event, 580 years in the making, is a rare choreography of both planetary alignment and the moon’s slightly unbalanced orbit around Earth. The moon’s orbit is somewhat elliptical; its distance from Earth’s surface varies slightly as it circles the planet.

“That slight distance difference affects the apparent size of the objects and how long the shadow takes to cross,” Ms. Bieryla said. During Friday’s eclipse, the moon will be orbiting Earth in one of its farthest distances from the surface — like the opposite of a supermoon, when the moon is closest to Earth — while falling into alignment.

The eclipse offers a chance to see the solar system’s movement play out in real time. Although it will be visible across all parts of the United States, if you’re on the other side of the world, you won’t be able to see it in person. But the Lowell Observatory of Flagstaff, Ariz., will have a live YouTube stream of the event.

“An eclipse, or a meteor shower, any of these events, people just take a moment to look up and relish in the beauty of nature,” Ms. Bieryla said. “It’s these small moments that remind you there’s a lot more going on out there.”

When are the next eclipses I can see?

If you miss Thursday and Friday’s lunar eclipse, there are more to come. Beginning at 9:32 p.m. Eastern time on May 15 next year, the moon will be completely submerged in Earth’s shadow in a total lunar eclipse. That roughly five-hour eclipse should be completely visible to sky-watchers across South America and in the eastern U.S., and partially visible to those on the West Coast.

Then on Nov. 8, there will be another total lunar eclipse that will be visible mainly over the Pacific Ocean.