U.K. Weighing Lockdown Amid an Omicron Wave and Political Turmoil 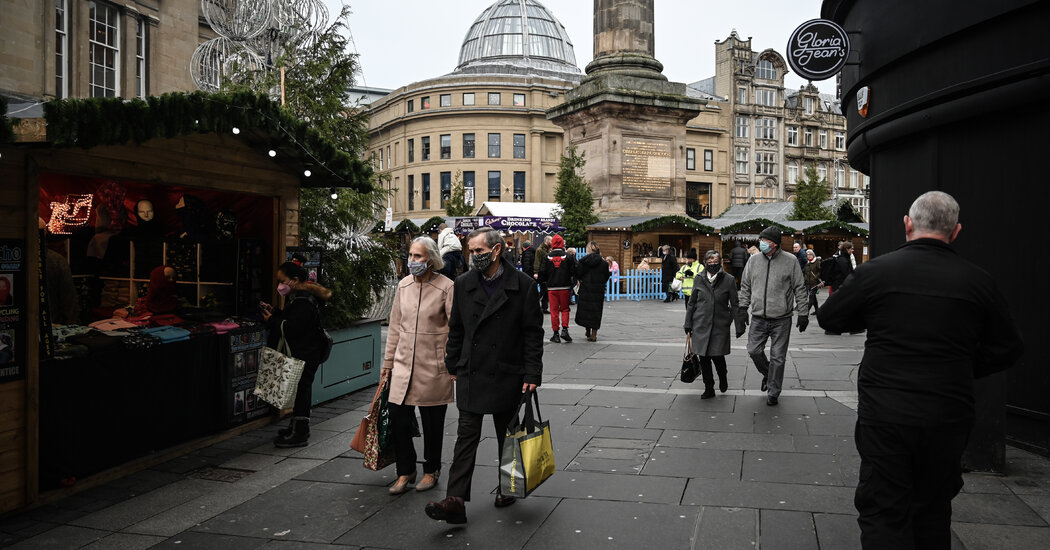 LONDON — With coronavirus cases in Britain exploding, driven by the highly transmissible Omicron variant, the government is leaving open the possibility of soon imposing another round of restrictions, the country’s health secretary said on Sunday.

Scientific advisers have warned lawmakers that more action is needed, because the surge is threatening to overwhelm the country’s health system, even after the government announced a long-resisted coronavirus contingency plan earlier this month, urging people to work from home if possible and extending a face-mask mandate.

Over the weekend, Sadiq Khan, London’s mayor, declared a “major incident” — an emergency status that frees up resources — in the capital, and speculation on the possibility of a short-term nationwide lockdown has been swirling.

The fears of a public health emergency only days before Christmas have coincided with a political crisis for Prime Minister Boris Johnson, deepened by the resignation on Saturday of David Frost, the Brexit negotiator and a key ally, who cited his opposition to lockdown measures when he quit. On Sunday, Downing Street announced that the foreign secretary, Liz Truss, would take over Brexit responsibilities.

The timing of Mr. Frost’s resignation underscores the acute political perils confronting Mr. Johnson as he considers imposing restrictions on Britons for the second Christmas in a row, despite fierce opposition from Mr. Frost and many others in his Conservative Party who have objected to the measures on the grounds that they could jeopardize the economy and restrict freedom.

While the government has refrained from announcing a lockdown, the health secretary, Sajid Javid, seemed to be priming the public on the possibility when he refused on Sunday to rule out the potential for more stringent measures before Saturday.

“There are no guarantees in this pandemic,” he said. “At this point, we just have to keep everything under review.”

Mr. Javid did not deny speculation that the government was considering a two-week “circuit breaker” that could mean curbs on pubs and restaurants, and the government’s emergency committee held a private meeting on Sunday with national leaders about the surge in cases. Mr. Khan said on Sunday that he thought more restrictions were “inevitable.”

But Mr. Javid said that if new measures were to be taken imminently, Parliament, which is in recess, would be recalled, raising the prospects of yet more political trouble for Mr. Johnson.

Despite some early indications that the Omicron variant may cause a more mild form of Covid, Mr. Javid said that even a small percentage of hospitalizations within a very large number of overall new infections could overwhelm the health system.

Even before the variant triggered a steep rise in coronavirus cases, Britain’s National Health Service was under serious strain, which Mr. Javid acknowledged on Sunday, and infections among health care workers have led to staffing issues in some hospitals.

Staff absences linked to the coronavirus have risen rapidly even as new admissions of Covid patients are on the rise, Chris Hopson, the chief of N.H.S. Providers, the membership organization for England’s National Health Service staff, explained in a series of posts on Twitter.

Some hospitals are postponing nonessential services and are “beyond full stretch” as they cope with new cases, staff shortages and the demands to expand vaccine booster programs, he wrote.

Stephen Reicher, a professor of social psychology at the University of St. Andrews and a member of Britain’s Scientific Advisory Group for Emergencies, which advises the government, said the most effective way to cut down on social contacts and to stem the spread of the variant was through a short-term lockdown.

But, he told Times Radio on Saturday, that after Christmas, “it’s probably too late — it’s probably by then we will have had a huge surge of infections with all the impact upon society.”

Despite the clear risks nationally, the turmoil within Mr. Johnson’s Conservative Party complicates the government’s calculations on whether to bow to scientific advice and introduce the types of new restrictions that could slow the spread of the virus.

Though Mr. Frost’s resignation letter listed a variety of policy frustrations that are widely shared among a faction of the party, he pointedly warned the government against imposing what he described as “the kind of coercive measures we have seen elsewhere.”

Similar arguments were made by Conservative lawmakers in Parliament on Tuesday, when around 100 rebelled over the introduction of a Covid pass to enter some large events.

That was a warning that the government would most likely face another mutiny if it were to proceed with tighter restrictions.

Though Mr. Johnson could probably rely on support from the opposition Labour Party to get Parliament to approve new rules, doing so would further advertise the weakness of a prime minister whose leadership is being openly questioned.

Wes Streeting, who speaks for the Labour Party on health issues, denounced the Conservatives’ infighting, saying Mr. Javid looked like “a hostage to his own party.”

“What we saw this week in Parliament, with the huge rebellion of over 100 Conservative M.P.s on what were actually quite modest measures, tells us that the prime minister has a big problem when it comes to the crisis of confidence in leadership within his own ranks,” he said on Sunday on Sky News. “And, crucially, that is impacting on the government’s public health response.”

While Britain’s response has been deeply tied to political drama, the steady rise in Omicron cases has driven other countries around Europe to take more drastic measures.

On Saturday, the Netherlands became the first on the continent to reimpose a full lockdown, with Dutch leaders ordering the closure of all nonessential shops, bars, restaurants, gyms, sporting and cultural venues and schools from Sunday until mid-January. The country’s national health authority had predicted a sharp increase in hospitalizations and a collapse of the health care system if lockdown measures were not taken.

On Friday, Denmark announced the closure of cinemas, theaters and concert venues after a record number of daily coronavirus infections there, also driven by the new variant. And Ireland, which also recently announced a number of new restrictions, has confirmed that Omicron cases now make up the majority of coronavirus cases nationally.

Unlike some countries reacting to new record rates of infections, Germany is already under a number of tight restrictions, including a nationwide rule that allows only the vaccinated or those who have recovered from the coronavirus into restaurants, bars and nonessential shops.

On Saturday, Germany added Britain to its list of countries that face travel restrictions, a grouping that includes South Africa and other nations in southern Africa where the Omicron variant is widespread.

Although daily infections have slowly decreased since early December, the German authorities are expecting the Omicron variant to drive a new wave of infections. Karl Lauterbach, the country’s new health minister, told reporters on Friday that he a surge was probably inevitable.

“We have to assume that the Omicron wave we are facing, which I don’t think we can prevent, will be a massive challenge for our hospitals, for our intensive care units, but also for society as a whole,” said Mr. Lauterbach, a medical doctor and a Harvard-trained epidemiologist.

But while Europe may be facing an acute Omicron surge, it is clearly not limited to one region. As Dr. Anthony S. Fauci, the United States’ top infectious disease expert, said Sunday on NBC’s “Meet the Press,” “It is just raging through the world.”