U.S. Eases Some Restrictions on Aid for Afghanistan 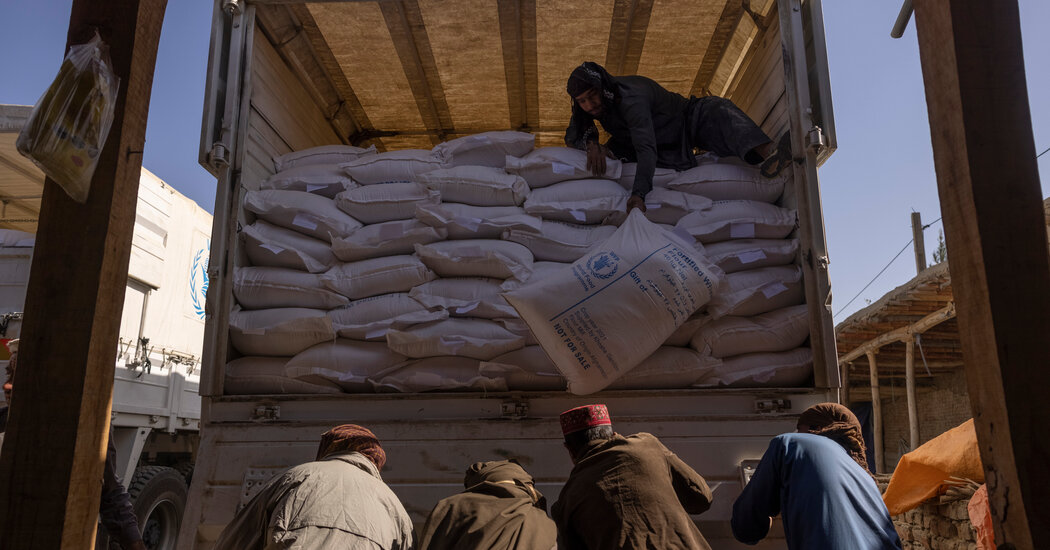 The Biden administration on Wednesday took steps to make it easier for humanitarian aid to reach Afghanistan as the combination of the pandemic, a severe drought and a cash shortage have left the country’s fragile economy on the brink of collapse.

The Treasury Department said the measures would give American and international aid groups more freedom to operate in the country, while allowing the United States to maintain economic pressure on the Taliban.

“The United States is the largest single provider of humanitarian assistance in Afghanistan,” Wally Adeyemo, the deputy Treasury secretary, said in a statement. “We are committed to supporting the people of Afghanistan, which is why Treasury is taking these additional steps to facilitate assistance.”

But diplomats and activists said the changes might not be enough to rescue Afghanistan from what one U.N. official called “shocking levels of need and suffering.”

The United States does not recognize the Taliban as the legitimate government of Afghanistan. Following the group’s takeover of the country this year, the Biden administration froze $9.5 billion of Afghanistan’s foreign reserves, stopped sending shipments of dollars to Afghanistan’s central bank and pressured the International Monetary Fund to delay plans to transmit emergency reserve funds to the country.

The Treasury Department said that new “general licenses” would allow financial transactions involving the Taliban and members of the Haqqani Network as long as the money was used for things such as projects to meet basic human needs, civil society development and environmental and natural resource protection.

The move comes after the Treasury Department earlier this month issued a license allowing personal remittance payments to be sent to people in Afghanistan.

The Biden administration is walking a delicate line between trying to provide relief to the people of Afghanistan and keeping economic pressure on the Taliban as leverage to prevent human rights abuses and terrorist activity. Biden administration officials said that international aid groups had deep experience working with countries where sanctions were in place and that they were hopeful that the relief would reach its intended recipients.

“We’re very conscious of the fact that there is an incredibly difficult humanitarian situation right now, one that could get worse as winter sets in,” Secretary of State Antony J. Blinken told reporters in an end-of-year news conference on Tuesday.

He called the problem “an area of intense focus” for the administration, while noting that the United States was the top provider of humanitarian aid to the country. At the same time, Mr. Blinken said, America is determined to ensure “that the Taliban make good on the expectations of the international community,” including by respecting human rights and women’s rights, not carrying out reprisals against political enemies, and preventing transnational terrorist groups from operating on Afghan soil.

International organizations have been accelerating their efforts to provide assistance in recent weeks.

The World Bank said this month that the Afghanistan Reconstruction Trust Fund donors would transfer $280 million to UNICEF and the World Food Program by the end of the year to provide humanitarian help to Afghanistan.

Also on Wednesday, the United Nations Security Council unanimously adopted a resolution that seeks to reduce the legal and political risks of delivering humanitarian aid to Afghanistan.

The resolution, which was proposed by the United States, exempts humanitarian activities such as payments and delivery of goods and services from U.N. sanctions for a one-year period. It passed two days after China blocked a narrower version drafted by the United States that would have allowed only case-by-case exemptions.

After Wednesday’s passage of the broader measure, China’s U.N. ambassador, Zhang Jun, said on Twitter that the new resolution “can only fix the faucet, but to keep the water running, the international community need to make joint efforts.”

“Major donors need to step up efforts in providing more assistance, and the Afghan overseas assets should be unfrozen at the earliest,” he added.