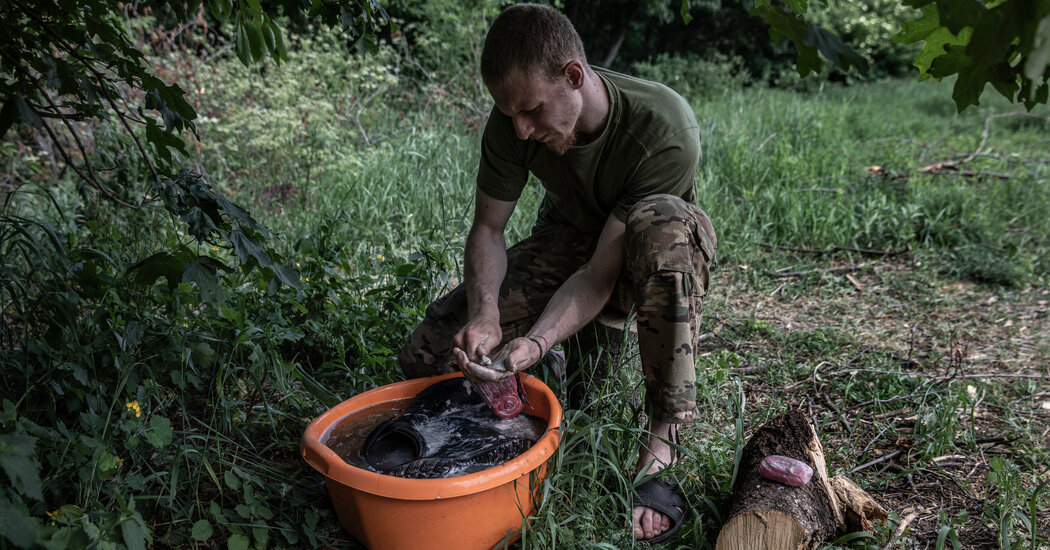 One hundred days ago, before sunrise, Russia launched artillery strikes on Ukraine before sending troops racing toward major cities, beginning a war against a much smaller country and outnumbered military that seemed destined to quickly topple the government in Kyiv.

But the brutal invasion has ripped apart those predictions, reawakening old alliances, testing others and spreading death and destruction across the country. Both armies are now locked in fierce and bloody battles across a 600-mile-long front for control of Ukraine’s east and to gain the upper hand in the conflict.

The winner, if there is one, is not likely to emerge even in the next 100 days, analysts say. Some foresee an increasingly intractable struggle in eastern Ukraine and a growing confrontation between President Vladimir V. Putin of Russia and the West.

New Western arms promised to Ukraine — such as long-range missiles announced by President Biden this week — could help it reclaim some towns, which would be significant for civilians in those areas, said Ian Bremmer, president of the Eurasia Group, a political risk consulting organization. But they are unlikely to dramatically alter the course of the war, he said.

Squeezed by tightening Western sanctions, Russia, he said, was likely to retaliate with cyberattacks, espionage and disinformation campaigns. And a Russian naval blockade of Ukrainian grain is likely to worsen a food crisis in poor countries.

“What we’re looking at now is what the war in Ukraine is likely to look like in 100 days, not radically different,” Mr. Bremmer said. “But I think the confrontation with the West has the potential to be significantly worse.”

President Volodymyr Zelensky of Ukraine said defiantly Friday that “victory will be ours,” and noted overnight that 50 foreign embassies had resumed “their full-fledged activities” in Kyiv, a sign of the fragile sense of normalcy returning to the capital.

Nevertheless, more than three months into a war that has radically altered Europe’s security calculus, killed thousands on both sides, displaced more than 12 million people and spurred a humanitarian crisis, Russian forces now control one-fifth of the country — an area greater than the Netherlands, Belgium and Luxembourg combined.

Asked during a briefing with reporters what Russia had achieved in Ukraine after 100 days, Dmitri S. Peskov, the presidential spokesman, said that many populated areas had been “liberated” from the Ukrainian military, whom he described as “Nazi-minded,” doubling down on a false narrative the Kremlin has used to justify the invasion.

The International Committee of the Red Cross said Friday that the invasion had caused destruction that “defies comprehension,” adding, “It would be hard to exaggerate the toll that the international armed conflict in Ukraine has had on civilians over the last 100 days.”

More than 4,000 civilians have been killed since Feb. 24, according to U.N. estimates. Ukrainian officials place the death toll much higher.

The war has also set off the largest exodus of refugees in Europe since World War II. More than 8 million Ukrainians have been internally displaced, and more than 6.5 million have fled to other countries, according to the United Nations.

Half of Ukraine’s businesses have closed and 4.8 million jobs have been lost. The U.N. estimates the country’s economic output will fall by half this year. Ninety percent of the population risks falling near or below the poverty line. At least $100 billion in damage has been done to infrastructure.

“We may not have enough weapons, but we are resisting,” said Oleh Kubrianov, a Ukrainian soldier who lost his right leg fighting near the front line, speaking in a raspy voice as he lay in a hospital bed. He still had shrapnel lodged in his neck. “There are many more of us, and we are motivated, and convinced by our victory,” he said.

Indeed, a recent poll found that almost 80 percent of Ukrainians believe the country is “moving in the right direction.”

“The idea of Ukrainian identity expanded,” said Volodymyr Yermolenko, a Ukrainian writer, describing the national sentiment. “More people feel themselves Ukrainian, even those who were doubting their Ukrainian and European identity.”

Russia, too, is suffering from the invasion, geopolitically isolated and facing years of economic dislocation. Its banks have been cut off from Western finance, and with oil production already off by 15 percent, it is losing energy markets in Europe. Its industries are grappling with developing shortages of basic materials, spare parts and high-tech components.

The decisions by Finland and Sweden to abandon more than 70 years of neutrality and apply for membership in NATO have underscored the disastrous strategic costs of the invasion for Russia.

Major Western companies like McDonald’s, Starbucks and Nike have vanished, ostensibly to be replaced by Russian brands. The impact will be less noticeable outside major cities, but with nearly 1,000 foreign companies having left, some consumers have felt the difference as stocks ran low.

While existing stocks have kept much of the country ticking, Russia will soon have much more of a Soviet feel, reverting to an era when Western goods were nonexistent. Some importers will make a fortune bringing in everything from jeans to iPhones to spare engine parts, but the country will become much more self-contained.

“In Russia, the most important economic thing in the last 100 days is that Putin and the elite firmly settled on an autocratic, isolationist course, and the wider elite and public seem supportive,” said Konstantin Sonin, a Russian economist at the University of Chicago.

“It seems that the course is settled, and it will be hard to reverse even if the war ended miraculously quickly,” he added. The next step will likely be a return to more centralized economic planning, he predicted, with the government setting prices and taking over the allocation of certain scarce goods, particularly those needed for military production.

The war is reverberating globally as well. On Friday, Macky Sall, the president of Senegal and chairman of the African Union, appealed directly to Mr. Putin to release Ukraine’s grain as countries across Africa and the Middle East face alarming levels of hunger and starvation.

“Our countries, although they are far from the theater,” Mr. Sall said, “are victims of this crisis on an economic level.”

Tens of millions of people in Africa are on the brink of severe hunger and famine.

On Friday, Chad, a landlocked nation of 17 million people, declared a food emergency and the United Nations has warned that nearly a third of the country’s population would need humanitarian assistance this year.

For now, peace in Ukraine appears to be nowhere in sight.

On Friday, the skies around Sievierodonetsk, the last major city in the Luhansk region of eastern Ukraine still under Ukrainian control, were heavy with smoke as both armies traded blows in a fierce battle.

Ukrainian troops were moving heavy guns and howitzers along the roads toward the frontline, pouring men and armor into the fight. Russian rockets pummeled an area near Sievierodonetsk late Friday afternoon, landing with multiple heavy explosions that were audible from a nearby village. Missiles streaked through the sky from Ukrainian-held territory toward Russian positions.

Bruno Tertrais, deputy director of the Paris-based Foundation for Strategic Research, said both sides could become bogged down for months or years in a war of “positions,” rather than movement.

“This is not a bad scenario for Russia, which would maintain its country in a state of war and would wait for fatigue to win over the Westerners,” Mr. Tertrais wrote in a paper for the Institut Montaigne. Russia would already win to some degree, “by putting the occupied regions under its thumb for a long time.”

Amin Awad, the United Nations’ crisis coordinator for Ukraine, said that regardless of who wins the conflict, the toll has been “unacceptable.”

“This war has and will have no winner,” Mr. Awad said in a statement. “Rather, we have witnessed for 100 days what is lost: lives, homes, jobs and prospects.”