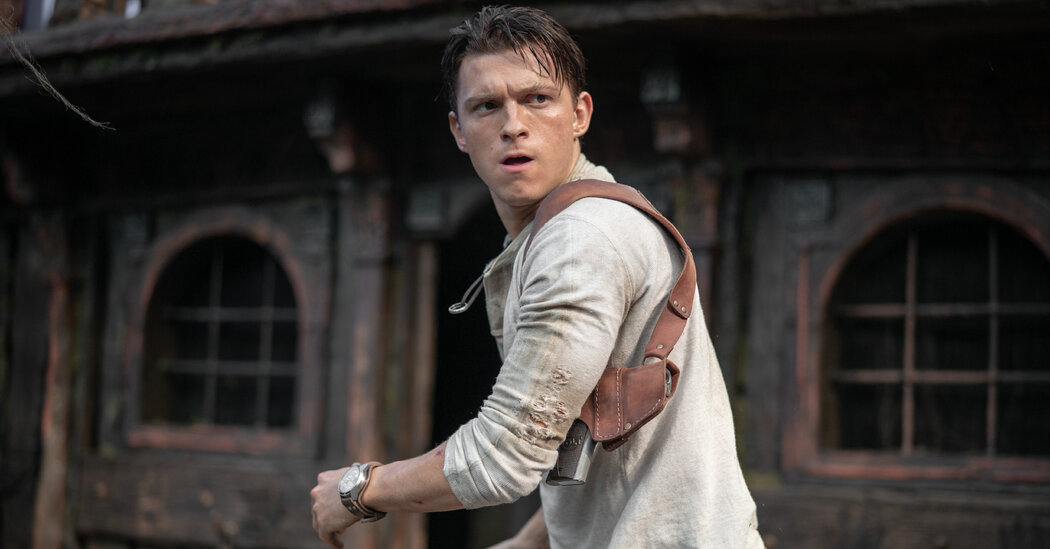 At least give Sony credit for recycling. That is the best that can be said for its nitwit treasure-hunt movie “Uncharted,” an amalgam of clichés that were already past their sell-by date when Nicolas Cage plundered the box office in Disney’s “National Treasure” series. Now, it is Tom Holland’s turn to cash in with a musty story about ancient loot, old maps, lost ships, invisible ink and a wealthy scoundrel with disposable minions. But while he’s following in Cage’s inimitable footsteps, Holland also seems in training to become Tom Cruise 2.0.

The similarities between “Uncharted” and the first “National Treasure” are notable, with both movies adhering to the same booty-questing template. Each opens with a flashback of the protagonist as a wee lad eagerly being primed for adventure by an older male relative, a misty rite of passage that seems calculated to put a family-friendly stamp on an otherwise greed-driven setup. In “National Treasure,” the kid soon becomes a character played by Cage, whose singular, offbeat performance style can elevate and disrupt crummy material.

In “Uncharted,” the boy grows up to become a neo-buccaneer played by the boyish Holland, a likable, exuberantly physical performer who has traded his Spider-Man responsibilities for more old-school heroic duty. The Hollywood action movie seems an open field right now partly because most of the male stars who headline non-comic-book blockbusters are middle-aged or older. Holland is 25. He’s cute without being threatening or distractingly, Chalamet-esquely beautiful, and has enough presence and training (dance, gymnastics, parkour) that he can bluff and breeze past clichés while gracefully bouncing through fights and obstacles.

Cruise will be 61 when the next “Mission: Impossible” finally (maybe) opens in July 2023. He’s likely to keep going Energizer Bunny-style for years to come. Still, the paucity of young male actors who have the profile, credits and skill set to sell studio goods like “Uncharted” may prove a lucrative opportunity for Holland and his treasure-seeking handlers. At any rate that may explain the images of his character, Nate Drake, a thief who moonlights as a bartender (or vice versa), pulling some smooth moves on the job, a bit of juggling tomfoolery that instantly triggers images of Cruise in “Cocktail.”

Soon enough, though, Nate leaves behind his gig and his New York pad for an international escapade that he embarks on in tandem with Mark Wahlberg’s Sully, a more experienced, openly untrustworthy thief. A veteran of workaday blockbusters, Wahlberg serves twinned functions here as a presold pop-culture brand and an archetypal mentor for Nate. Sully can sprint, fight and trade unfunny quips without breaking a sweat, and Wahlberg is just fine delivering the same gruff, regular-guy performance that he always does. He shares top billing with Holland, but Wahlberg is largely onboard as training wheels for the younger actor.

“Uncharted” is based on a PlayStation game of the same name that first hit in 2007 and that tracks the globe-trotting doings of its Everyman hero, said to be descended from the British privateer Sir Francis Drake. The movie, directed by Ruben Fleischer, nods to the game and Sir Francis, who circumnavigated the globe in the 16th century and was instrumental in England’s challenge to Spain. Given the current climate, though, it’s a surprise that the movie didn’t quietly ignore Sir Francis, who participated in establishing the slave trade. In 2020, a statue of Sir Francis in Britain was draped in chains with a sign reading “decolonize history.”

Hollywood’s penchant for ignoring inconvenient historical truths means that the movie leans into Sir Francis’s globe-trotting and plundering as well as his fight against the Spanish, in this case through the proxy figure of Santiago Moncada (Antonio Banderas). A Barcelona moneybags, Santiago is out to enhance his fortune with the same treasure that Nate and Sully are chasing. It’s a bit of a bummer to see Banderas back in this type of throwaway role, though presumably stars can’t live on Pedro Almodóvar movies alone. Mostly, Banderas handsomely scowls, barks orders and helps keep the machinery chugging.

For his part, Nate grins and grimaces, runs and leaps, nimbly going through many of the same action-movie paces that heroic avatars have long gone through. He also types on a computer keyboard, wears a tux at a fancy party à la James Bond and flirts with a romantic foil, Chloe (Sophia Ali). Like the movie’s scariest baddie, Braddock (Tati Gabrielle), Chloe is one of those tough — but sexy! — female characters who’s more physically in the mix than she would have been in the past, back when the love interest was played by the blonde du jour. But while Chloe and Braddock are clearly adding something new to the same old story, they’re still performing the same old roles for yet another Hollywood male contender.