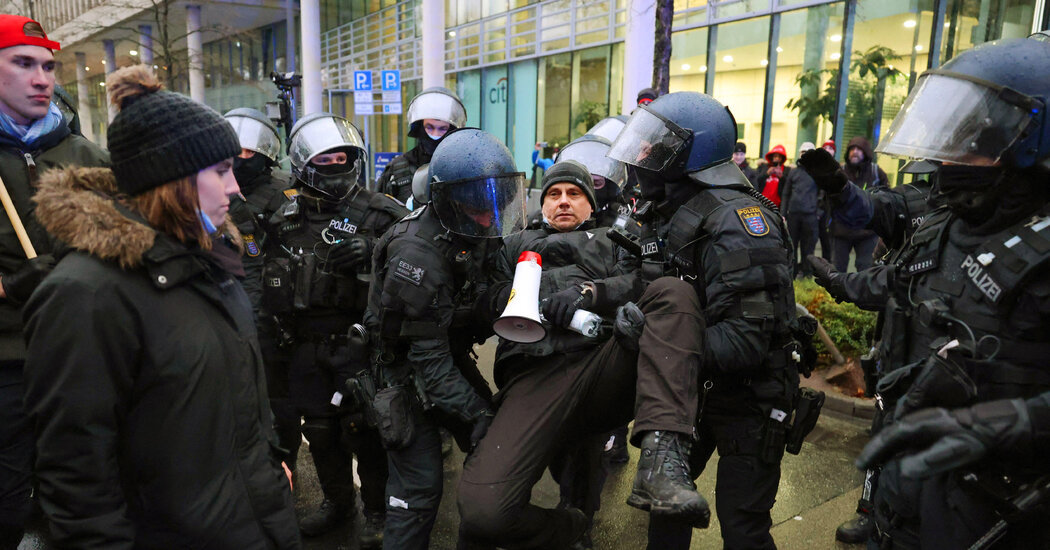 LONDON — In England, the prime minister now talks about compulsory vaccinations, just six months after proclaiming “Freedom Day” from coronavirus restrictions. In Germany, the new chancellor has endorsed barring unvaccinated people from much of public life. Next door, in Austria, the unvaccinated will remain confined to their homes, even after the government lifts a lockdown on Sunday.

Across Europe’s democracies, the latest wave of the pandemic is prompting governments to reimpose sweeping restrictions on free movement and mixing in their societies. Only this time, many of the rules single out those who are not vaccinated. That has stirred angry street protests and rekindled a searing debate over how much countries should curtail individual liberties in the name of public health.

Some of the most abrupt reversals are occurring in countries where the laws and culture cherish the sanctity of personal rights. In Britain, Prime Minister Boris Johnson’s new measures kicked off a mutiny in his Conservative Party, with lawmakers calling his embrace of vaccine passes “discriminatory” and an affront to the country’s hallowed principles. Similar protests echo in France and Germany.

The backlash plays out vividly every weekend on the streets of Vienna, where tens of thousands of protesters march, some brandishing placards that say, “Control our borders, not our people!” Demonstrators have also clashed with the police over restrictions in Belgium, Germany and the Netherlands.

“The civil liberty argument has ebbed and flowed,” said Adam Wagner, a London-based human rights lawyer and expert on Covid-related laws. “The risk with the move toward vaccine passports is that it radicalizes libertarians and vaccine skeptics.”

That people are still arguing about how to weigh these competing values, nearly two years after the pandemic began, Mr. Wagner said, suggests, “we haven’t really come up with any great solutions.”

Many in Europe have proven to be surprisingly tolerant about the need to sacrifice some freedoms to curb the spread of the virus. But the sudden threat of the new Omicron variant is pushing countries like Britain, which only last summer had celebrated an end to lockdowns, to lurch back in the direction of restrictions.

Mr. Johnson and other European leaders are being driven by two unforgiving medical trends: the rapid spread of the Omicron variant, which British scientists estimate is doubling at the rate of every two to three days; and a stubborn resistance to vaccines in segments of their societies, which has left roughly a third of people across Europe more vulnerable to another wave of infection.

Defenders of vaccine passes point out that they drove up the vaccination rate in France, another country that jealously guards rights. But to critics, the targeted nature of these restrictions imposes a stigma on one part of society. That carries disquieting echoes in Germany and Austria, where right-wing protesters invoke the Nazi boot to claim that the state is persecuting those who resist vaccines.

“It’s polarizing and divisive in the sense that it creates a society of us versus them, which is a very dangerous proposition, I think,” said Clifford Stott, a professor of social psychology at Keele University in England. “We are creating a recipe for disorder by amplifying structural inequalities.”

People who have not been vaccinated, or actively resist vaccines, tend to be poorer and less well-educated than those who have, Mr. Stott said. Many already distrust the government. Forcing their compliance by sequestering them at home or depriving them of access to bars and restaurants is only likely to deepen their sense of grievance, he said.

In some countries where the leaders are scrambling to deflect harsh criticism, suspicion about their motives is even more acute. Mr. Johnson imposed fresh restrictions — including a requirement to show proof of vaccination to get into cinemas, theaters, or sports stadiums — amid a furor over a holiday gathering his staff held last year that may have flouted lockdown rules. It was, said one lawmaker, a “diversionary tactic.”

Undaunted, Mr. Johnson said it was time to have a “national conversation” about whether to make vaccination compulsory — a step Austria has taken, and Germany seems poised to follow. Britain, he said, could not afford to keep imposing lockdowns “just because a substantial proportion of the population still sadly, has not got vaccinated.” With 70 percent of people having received two shots, Britain’s vaccination rate is comparable to that of France and Germany.

Jonathan Sumption, a former justice on Britain’s Supreme Court, who has been an outspoken critic of lockdown restrictions, said it was unlikely, given the country’s civil liberties tradition, that Britain would ever follow Austria.

“There are things governments should not do even if they work,” he said. But Mr. Sumption said the aggressive use of vaccine passports would have the same effect, since “people will be deprived of so many rights to go about their daily lives.”

In Germany, Chancellor Olaf Scholz, who rejected mandatory vaccinations during his campaign, now backs a law that would make it compulsory. Germany has been ravaged by the Delta variant, running roughly 50,000 new infections a day. Its number of vaccinated people has picked up in recent days, partly because of the fear of Omicron, but the slow pace has frustrated the government.

“You can’t callously watch the situation as it is right now,” Mr. Scholz said last week. “If we had a higher vaccination rate, we would have a different situation.”

His timing was good: Germany’s highest court recently ruled that lockdowns ordered by the government earlier this year were constitutional. A YouGov poll at the end of November found that 69 percent of the German population now supported a vaccine mandate, up from 33 percent a year ago. On Friday, lawmakers voted to make vaccines obligatory for health workers.

Still, there is palpable ambivalence about the trade-offs. Karl Lauterbach, a member of Parliament who has been hawkish on restrictions and now serves as Germany’s health minister, told Der Spiegel that no one would be jailed for refusing to get vaccinated. Instead, he said, he envisioned fines for those who refuse.

Vaccine mandates in Europe. The latest wave of the pandemic is prompting countries like Germany and Italy to impose restrictions that single out those who are not vaccinated. The measures are rekindling the debate over governments’ right to curtail individual liberties in the name of public health.

The worldwide vaccination campaign. One year into the global vaccine rollout, the gap in vaccination rates between high- and low-income countries is wider than ever. A Times analysis shows how infrastructure issues and the public’s level of willingness to get vaccinated may pose larger obstacles than supply.

Regardless, the debate is likely to bring more people into the streets. In Saxony, in eastern Germany, thousands have set off on nightly “walks” to protest both restrictions and vaccinations. The protest have become more violent, and among those marching are far-right figures who are exploiting the anger.

A recent study of civil liberties during the pandemic by scholars from Harvard and Stanford found that people who lived in parts of Germany that belonged to the Communist east before reunification, like Saxony, were less likely than other Germans to countenance any infringement of their rights.

What’s not clear, experts said, is whether these protests will peter out, as have previous demonstrations. Ulrich Wagner, a professor of social psychology at the University of Marburg, argued that, paradoxically, a law forcing vaccinations could end up shaking people out of their opposition to them.

“Mandatory vaccination is a clear prescription and from a psychological point of view, it makes it easier to be brought around,” Professor Wagner said.

The far-right plays an even more conspicuous role in fueling the protests in Austria. Herbert Kickl, the leader of the right-wing Freedom Party, is a featured speaker at the weekly rallies in Vienna. Despite being stricken with Covid symptoms two weeks ago, he promised to lead the “the largest demonstration ever” on Saturday. A few marchers have even fixed a yellow Star of David to their coats, suggesting they somehow suffer the same persecution as the Jews under Hitler.

Still, said Eugen Freund, a former member of the European Parliament from Austria, “It is a strange mix.” There are also “families with small children who claim that the sanctity of their body is under threat,” he said, “Those who subscribe to esotericism and homeopathic drugs.”

Austria’s vaccination rate, at 67 percent, is among the lowest in Europe. It, too, has been suffering through its most serious wave of Covid yet, and there is quiet support for the restrictions. Austria announced a 20-day lockdown and the mandatory vaccination on the same day in November.

Some countries appear to have struck a fitful balance between freedom and public health. When Italy required workers in October to obtain a Green Pass, certifying their vaccination status, protests erupted across the country. Hundreds of port workers gathered to block trucks in the northeastern city of Trieste.

But the unrest subsided after a few weeks, and most Italians now accept having a Green Pass as a condition to go to bars and restaurants. Some experts said Italy’s gradual approach laid the groundwork for even tighter restrictions.

“The Italian government proceeded by concentric circles,” said Michele Ainis, a constitutional expert at Roma Tre university. “It made Italians accustomed to having increasingly restrictive measures. So if we will get to the vaccination mandate it is possible that it will be more accepted.”