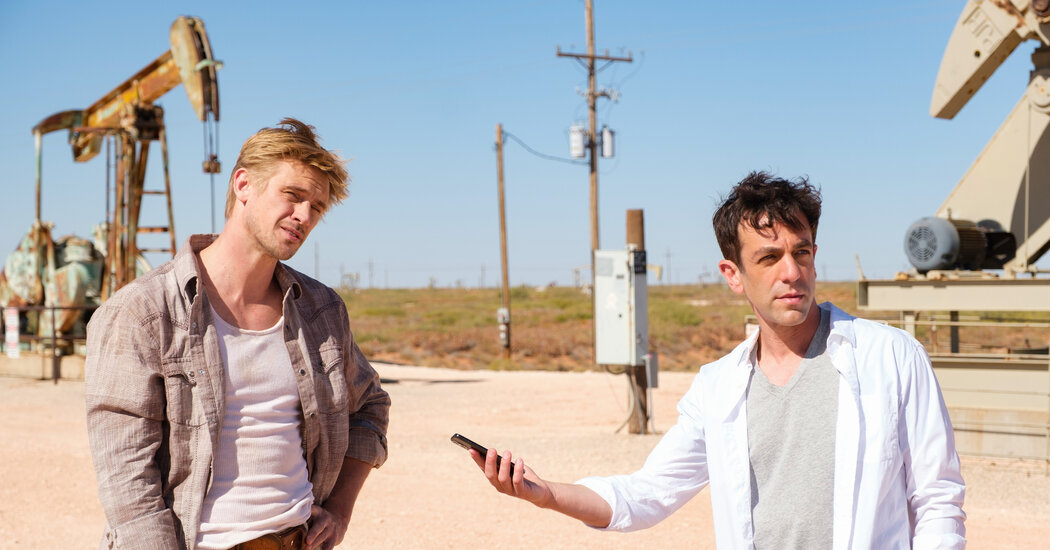 Ben Manalowitz, who writes for The New Yorker (he’s played by B.J. Novak, who has been published in its pages), wants to break into podcasting. “Not every white guy in America needs to have a podcast,” someone tells him, but this white guy sees the platform as a perfect stage for his ambitions and his big thoughts about America.

Ben has a theory about the divided, discontented state of the country. Eloise (Issa Rae), a receptive, well-connected, somewhat skeptical producer, tells him that what he needs is a story. Their brief debate about the relative merits of theories and stories distills a conundrum that will be familiar to journalists and other writers. Are we looking for facts or ideas? Characters or historical forces? Generalities or particulars? These questions are the key to “Vengeance,” which tries to have it both ways by reverse engineering its story about the treachery of storytelling from a theory about the danger of theorizing.

Novak, who wrote and directed the movie, has his own thoughts about America, subtler than Ben’s but not necessarily any more convincing. “Vengeance,” while earnest, thoughtful and quite funny in spots, demonstrates just how difficult it can be to turn political polarization and culture-war hostility into a credible narrative. Its efforts shouldn’t be dismissed, even though it’s ultimately too clever for its own good, and maybe not quite as smart as it thinks it is.

The same could be said about Ben, who is also, at least at the start of the movie, the object of Novak’s most brutal, knowing satire. We first meet him at a party on a terrace with a view of the Brooklyn Bridge, where he and a pal spin elaborate philosophical justifications for their cynical, transactional approach to sex and romance. The way Ben intellectualizes his own shallowness feels so accurate — and so repellent — that you may wonder if the film can redeem him enough to make another 90 minutes in his company anything but insufferable.

But what looks like yet another self-conscious, New York-centric satire of white male media-elite entitlement turns into something else. A few other things, really, including a fish-out-of-water comedy and a twisty detective story, with Ben as both fish and gumshoe.

A late-night phone call dispatches him to West Texas, where an aspiring singer he has hooked up with a few times in New York has been found dead under a pump jack in an oil field. Ben knew her as Abby, though he might not have known that it was short for Abilene. (In haunting, posthumously viewed video clips, she’s played by Lio Tipton.) Ben’s number was in her cellphone, and her family is under the impression that he was the love of her life.

Ben flies out to the funeral, where he is welcomed into Abilene’s big Texas family. There are two sisters (Isabella Amara and Dove Cameron) also named for cities, a no-nonsense mom (J. Smith-Cameron), a salty grandma (Louanne Stephens, who also played a Texas granny on “Friday Night Lights”) and two brothers, the younger of whom (Eli Abrams Bickel) answers to El Stupido.

The older one, Ty (Boyd Holbrook), dragoons Ben into the scheme that gives the movie its title and its momentum. Ty is convinced that Abilene’s death was the result of a shadowy, nefarious conspiracy, and that her killers need to be dealt with. In his feverish ramblings, Ben hears an opportunity for audio gold. True crime. A first-person meditation on American Life. An inquiry into the nature of storytelling and the slipperiness of truth. Eloise agrees — “a dead white girl: the holy grail of podcasting” — and ships him the necessary recording equipment.

The best part of “Vengeance” is the middle, during which Novak humanizes cultural stereotypes — including Ben himself — without losing his sense of humor. It turns out that people are complicated, and that they can surprise you. This is the kind of insight that is easily oversold, since it depends on an assumption that the audience thinks otherwise. But Ben’s superficial self-awareness is replaced by active curiosity (he is a writer, after all), and he comes to feel genuine tenderness for Ty, Granny and the rest. He also meets other local characters who knew Abilene and who aren’t who they seem to be, including a drug dealer (Zach Villa) and a mystical record producer (Ashton Kutcher).

For a while, glib sociology and facile plotting take a back seat to sharp, low-key humanist comedy. Novak, who has published a collection of short stories and a children’s book, is a deft writer and (as we know from “The Office”) a nimble ensemble player. A sitcom version of “Vengeance,” with Ben embedded in Abilene’s hometown, might be worth a few seasons on a streaming platform, and for about 45 minutes the movie functions as a pretty good pilot for that.

Ben develops an appreciation for Whataburger and Frito pie, learns a hard lesson about college football fandom and discovers that rural red-staters and urban blue-staters share certain aspirations (fame, self-expression) and cultural reference points (Anton Chekhov, Liam Neeson) while remaining out of sync on other matters. It’s when dealing — or not — with those matters that “Vengeance” turns coy and skittish. Gun culture and the opioid crisis receive cursory attention, but the movie mostly wishes away the sand in the gears of the American experiment.

Nobody has much to say about politics, race, religion, immigration or any of the other stuff we are always fighting about. Maybe Novak’s point is that, face to face and heart to heart, we don’t really fight as much as our social media avatars and elected representatives do. That’s a comforting idea, but this movie’s sophisticated theorizing and busy storytelling can’t disguise its essential banality.